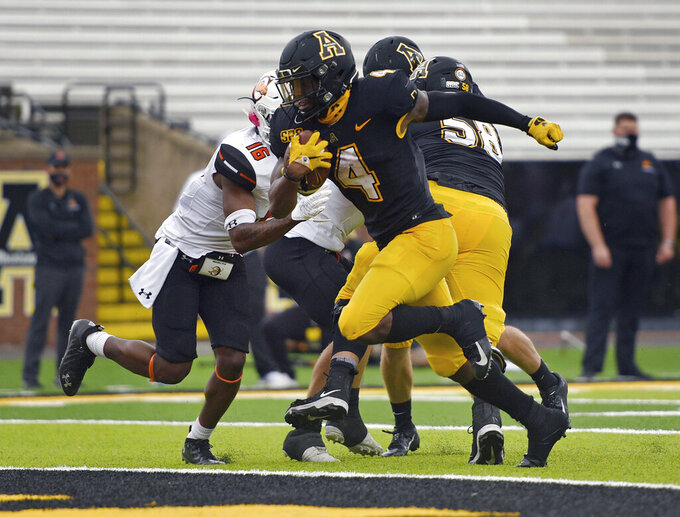 Appalachian St. running back Daetrich Harrington scores on a run during the second half of an NCAA college football game against Campbell, Saturday, Sept. 26, 2020 at Kidd Brewer Stadium in Boone, N.C. (Walt Unks/The Winston-Salem Journal via AP)

Eighteen members of a Quebec Major Junior Hockey League team have tested positive for the coronavirus and have been placed in isolation for 14 days, the team and league reported Wednesday.

The Blainville-Broisband Armada have suspended operations indefinitely because of the outbreak. The QMJHL started its regular season last Friday, while the Western and Ontario major junior leagues have delayed opening until at least December.

“Although our sanitary and medical protocol is very strict and rigorous, we knew that COVID-19 was highly infectious and could eventually hit certain players and team staff members,” QMJHL commissioner Gilles Courteau said in a statement Wednesday.

The league features aspiring professional players, including NHL prospects, between the ages of 16 and 21.

The Ohio Valley Conference has released its schedule for spring football after delaying the season from the fall because of the coronavirus pandemic.

Commissioner Beth DeBauche says the OVC wants to provide athletes a chance to play football this spring if the pandemic supports that move. She says the league also hopes having a schedule in place helps create a sense of certainty during uncertain times.

The league will use a round-robin format with the eight teams that decided to play in the spring with seven games over eight weeks starting Feb. 21. Games will be played on Sundays with the exception of Easter, and the schedule will conclude April 11. The schedule includes an open date during the week of the OVC basketball tournaments.

The OVC will allow teams to play one non-conference game either Feb. 13 or 14. The NCAA will be announcing teams for its revised 16-team playoff on April 18.

Next week’s game between Appalachian State and Georgia Southern has been postponed until December amid coronavirus cases and contact tracing within the Mountaineers program.

The schools announced the postponement Wednesday, one week before they were set to meet at Georgia Southern. That game will now take place on Dec. 12.

This marks the second straight postponed for the Mountaineers. They announced last week that Wednesday’s game against Louisiana would move to Dec. 4 or 5.

Appalachian State says it hasn't been able to practice since before the win against Campbell on Sept. 26, with all active cases recovering in isolation and others required to quarantine due to contact tracing.

The school had announced last week that there had been 19 new positive cases associated with the football team cluster, consisting of eight staff and 11 students.

The school also prohibited tailgating for its Sept. 19 home opener against Central Florida. Officials have not decided whether the tradition will be reinstated at the other four home games, saying that will be determined on a game-by-game basis relying on the advice of health experts.

Chairs, tables, grills and coolers will not be permitted outside of an individual’s vehicle. No loitering or gatherings of any size will be permitted in any on-campus area outside of the Bobby Dodd Stadium footprint for the prime-time game matching a pair of 1-2 teams.

“This was not a decision that was made easily,” athletic director Todd Stansbury said. “However, at this time, we still feel that the safest course of action is to invite fans to come straight from their vehicles to Bobby Dodd Stadium, where we can better safeguard the health and safety of our students, staff and visitors through the protocols that we have in place designed to mitigate the risk of the transmission of COVID-19.”