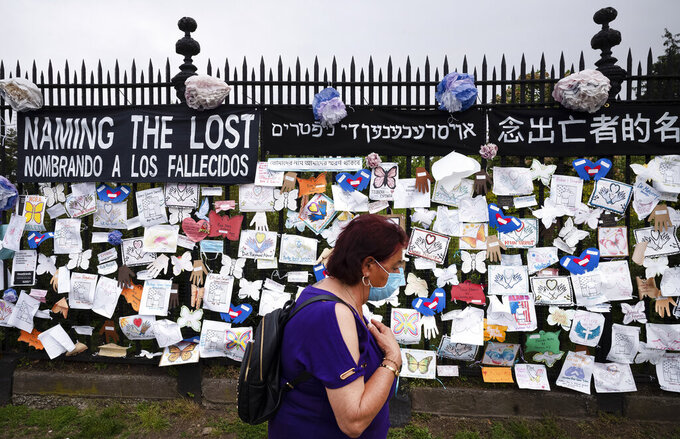 A woman passes a fence outside Brooklyn's Green-Wood Cemetery adorned with tributes to victims of COVID-19, Thursday, May 28, 2020, in New York. The memorial is part of the Naming the Lost project which attempts to humanize the victims who are often just listed as statistics. (AP Photo/Mark Lennihan)

The Latest on the coronavirus pandemic. The new coronavirus causes mild or moderate symptoms for most people. For some, especially older adults and people with existing health problems, it can cause more severe illness or death.

BEIJING — Around 400 German managers, workers and family members have begun returning to China aboard charter flights as multinational companies in the world’s second-largest economy seek to get their operations running again at full speed.

A pair of flights from Frankfurt to the Chinese business hubs of Tianjin and Shanghai were organized by the German Chamber of Commerce in China in cooperation with Germany’s diplomatic missions and airline Lufthansa and are the first repatriation flights from Europe to China for foreign nationals. China has largely banned all foreigners from entering China because of the coronavirus outbreak.

“This is an important step to reconnect China’s and Germany’s economies,” Jens Hildebrandt, executive director of the German Chamber of Commerce in North China, was quoted as saying in a news release. “It is our common interest to contribute in helping the economy return to normalcy and pre-virus levels.” More than 5,200 German companies operate in China, employing more than 1 million people. “We know there is a huge demand in the German business community to get more foreign employees back to China,” Hildebrandt was quoted as saying.

The first flight with 200 passengers was due to arrive shortly before noon on Saturday in Tianjin, a port city just east of the capital Beijing. Another flight to Shanghai. The second flight was expected to arrive in Shanghai around midday on Thursday, June 4.

SEOUL, South Korea -- South Korea reported 39 new cases of the coronavirus, most of them in the densely populated Seoul metropolitan area, where officials have found more than a hundred infections linked to warehouse workers.

Figures from South Korea’s Centers for Disease Control and Prevention on Saturday brought national totals to 11,441 cases and 269 deaths. At least 12 of the new cases were linked to international arrivals.

KCDC director Jeong Eun-kyeong said during a virus briefing Friday afternoon that at least 102 infections have been linked to workers at a massive warehouse operated by Coupang, a local e-commerce giant that has seen orders spike during the epidemic.

The company has been criticized for failing to implement proper preventive measures and enforce distance between employees, with virus discovered on the safety helmets, laptops, keyboards and other equipment they share.

Health workers have also found at least 266 infections linked to nightclubs and other entertainment venues in the Seoul metropolitan area, which saw huge crowds in early May as officials eased social distancing guidelines.

The resurgence in infections have alarmed officials as millions of children have been returning to schools nationwide.

While shutting nightspots and public spaces to slow the spread of the virus, government officials have so far maintained the phased reopening of schools, expressing hope that the recent transmissions could be contained quickly.

BEIJING — China reported four new confirmed cases of coronavirus on Saturday, all brought from outside the country and no new deaths.

Just 63 people remained in treatment and another 401 were under isolation and monitoring for showing signs of having the virus or of testing positive for it without showing any symptoms.

China has reported a total of 4,634 deaths among 82,999 cases since the virus was first detected in the central Chinese industrial city of Wuhan. Although virtually everyone still wears masks in public, most offices, shops and restaurants have re-opened, although the economic fallout from months of lockdown in most of the country have left millions unemployed and, combined with a worsening trade dispute with the U.S. and drop in global demand, it remains unclear how many jobs will return.

Health officials said Friday that they were seeking to “inform mass numbers of unknown people” after a person who attended crowded pool parties over Memorial Day weekend at Missouri’s Lake of the Ozarks tested positive for COVID-19.

Camden County Health Department said in a release that the resident of Boone County in mid-Missouri tested positive on Sunday after arriving at the lake area a day earlier. Officials said there have been no reported cases of the virus linked to coronavirus in residents of Camden County, where the parties seen in videos and photos posted on social media took place.

Because “mass numbers of unknown people” need to be notified, the officials released a brief timeline of the person’s whereabouts last weekend, including stops at a bar called Backwater Jacks, a bar and restaurant that has a pool, as well as a dining and pool venue called Shady Gators and Lazy Gators.

Parson allowed businesses and attractions to reopen May 4, but the state order requires 6-foot (2-meter) social distancing through at least the end of May.

UNITED NATIONS — The United Nations secretary-general has announced the deaths of two U.N. peacekeepers from COVID-19.

Antonio Guterres made the announcement at a ceremony Friday, which is the International Day of U.N. Peacekeepers, saying both peacekeepers were serving in Mali. The U.N. said one was from Cambodia and the other from El Salvador.

Guterres said the COVID-19 pandemic has changed almost everything, but not “the service, sacrifice and selflessness” of the more than 95,000 men and women serving in the U.N.’s 13 peacekeeping missions around the world.

According to the U.N. peacekeeping department, there have been 137 confirmed cases of COVID-19 in U.N. peacekeeping operations, with the greatest number by far — 90 cases — in Mali. The deaths are the first from the virus among peacekeepers.

More than 3,900 U.N. staffers have died on duty since 1948. That includes more than 100 U.N. peacekeepers killed in Mali since 2013 when the mission began in the aftermath of a French-led military operation to oust Islamic extremists from power.

One concern she cited was large Memorial Day gatherings along the Gulf Coast in Florida, Alabama and Mississippi that might have included New Orleans residents. She noted a photo of large gatherings on a northwest Florida beach.

“There is no social distancing. This kind of sight gives public health folks a whole lot of heartburn,” Avegno said.

ORLANDO, Fla. — Universal Orlando plans to reopen its hotels to guests on June 2, more than two months after they were closed to help prevent the spread of the coronavirus.

In a statement Friday, Universal said the hotels will be carefully managed in phases, and will reopen with a range of best practice and hygiene procedures.

Guests staying in the resort hotels will be able to visit Universal’s theme parks on June 3 and 4, before they fully reopen to the public on June 5.

SeaWorld plans to reopen on June 11 and Walt Disney World announced it will begin reopening in phases on July 11.

MOSCOW — The Russian government has presented updated coronavirus statistics to include deaths of those who tested positive for the virus but died of other causes.

Golikova said 1,675 people died of COVID-19 in April. Of that number, 1,136 deaths were directly caused by COVID-19, while the remaining 539 people tested negative but had symptoms indicating they most likely died of the virus. In addition, Golikova said 1,038 others tested positive for the virus but died of other causes.

If all those deaths are attributed to COVID-19, the nation’s total toll for April would be 2,713 or nearly 60% more than the previously announced number.

ROME — Italy’s health ministry has reported no critical coronavirus infection spikes in any region, giving a positive go-ahead for the planned June 3 reopening of Italy to inter-regional travel by Italians and Europeans alike.

The ministry on Friday issued a region-by-region breakdown of infection rates over the past week. The weekly report is part of Italy’s post-lockdown strategy to keep a close eye on infection rates and the ability of the national health system to respond to any new COVID-19 clusters in the onetime European epicenter of the pandemic.

The report said regions such as hard-hit Lombardy still showed a complex, high level of virus circulation, but said the situation was coming under control. The ministry recommended “caution, especially in the moment in which the frequency of movement of people across the national territory increases.”

Also Friday, Lombardy’s regional governor was interrogated by prosecutors investigating the failure of authorities to lock down Alzano Lombardo and other towns in Bergamo province after the first positive case there was registered Feb. 23. It took two weeks for the government to lock down all of Lombardy, allowing the virus to spread exponentially and kill thousands.

LAS VEGAS — Bleak numbers show the economic impact of Nevada casino and business closures because of the coronavirus pandemic.

With most businesses and all casinos shuttered through April, state regulators reported Friday that monthly gambling tax revenues were down nearly 100% compared with a year ago. Tourism officials tallied fewer than 107,000 visitors to Las Vegas during the month, down 97% from a year ago.

Democratic Gov. Steve Sisolak this week lifted closure orders on more businesses and said gambling can resume on June 4. McCarran International Airport in Las Vegas reported handling less than 4% of the passengers in April than it did in April 2019.