The Latest: 5 teams advance at Euro 2020 without playing 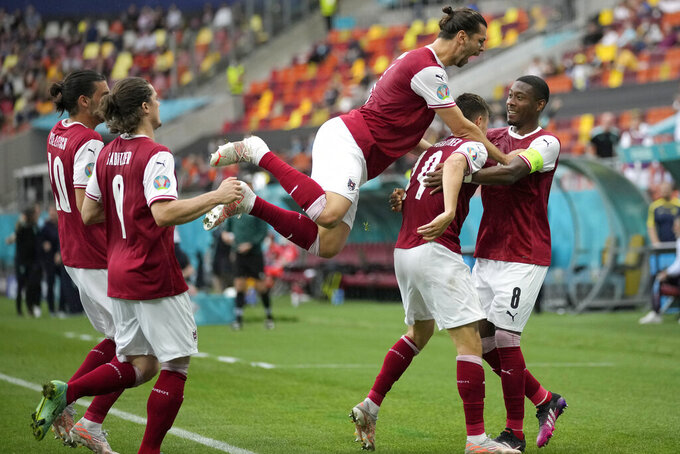 Five teams advanced to the round of 16 without even playing at the European Championship.

France, England, the Czech Republic, Sweden and Switzerland all are assured of advancing because they have four points and will finish no worse than third in their groups.

Results in the final Group B and C games have left Finland and Ukraine in third place in the respective standings with three points. That means any team with four points is guaranteed to be at least among the four best third-place teams.

Finland and Ukraine have not yet been eliminated. Results in Group D on Tuesday and Group E on Wednesday could leave those third-place finishers with only two points.

A woman ran onto the field in stoppage time of the match between Finland and Belgium at the European Championship.

She was quickly escorted off the playing surface by security at Saint Petersburg Stadium. She didn’t come into contact with any player.

Belgium secured a third straight victory at the European Championship by beating Finland 2-0 to finish in first place in Group B.

Finland fell behind in the 74th minute when a header from Thomas Vermaelen hit the post, the ball rebounded onto the hand of Finland goalkeeper Lukas Hradecky and went over the line.

Romelu Lukaku scored the other goal in the 81st for his third at Euro 2020.

The result allowed Denmark to advance to the round of 16 in second place in the group after beating Russia 4-1.

Andreas Christensen and Joakim Maehle scored late goals to give Denmark a 4-1 victory over Russia at the European Championship.

Mikkel Damsgaard put Denmark ahead in the first half and Yussuf Poulsen pounced on a defensive error to make it 2-0. Artem Dzyuba made it 2-1 from the penalty spot.

Memphis Depay scored a goal and was involved in two more from Georginio Wijnaldum in the Netherlands’ 3-0 victory over North Macedonia at the European Championship.

The Netherlands had already won the group before the match and North Macedonia was already eliminated after losing its first two matches at its first major tournament.

The match at the Johan Cruyff Arena was the 122nd and last international for North Macedonia captain Goran Pandev.

Christoph Baumgartner put Austria into the knockout stage at the European Championship for the first time by scoring the only goal in his team’s 1-0 victory over Ukraine.

Baumgartner scored only minutes after getting medical treatment after clashing heads in the air with Illia Zabarnyi. He was then substituted in the 32nd minute.

Austria finished second in Group C with six points. Ukraine is third with three points and could still advance as one of the four best third-place teams.

Italian Premier Mario Draghi says he backs the idea of moving the European Championship final out of Britain because of the spread of a highly contagious variant of the coronavirus in the country.

Draghi says “I advocate that the final should not take place in a country in which the risk of infection is very big.”

Draghi spoke ahead of a meeting with German Chancellor Angela Merkel. She has also expressed concern about the rise in cases of the delta variant in Britain.

North Macedonia players have formed a guard of honor for captain Goran Pandev at the European Championship as he was substituted in his 122nd and last international match.

The 37-year-old Pandev announced before the team’s final Group C match that he would retire after Euro 2020.

The team’s players, substitutes and coach lined up to hug him as he came off in the 68th minute of the match against the Netherlands.

Dutch and North Macedonian fans at the Johan Cruyff Arena in Amsterdam gave Pandev a standing ovation as he left the field.

Pandev started his international career in 2001. He has scored 38 goals for his country.

Netherlands captain Georginio Wijnaldum presented Pandev with an orange Netherlands shirt with the number 122 on the back before the match started.

England says players Ben Chilwell and Mason Mount are isolating after coming into contact with Scotland midfielder Billy Gilmour during Friday’s match at the European Championship.

The English Football Association says Chilwell and Mount “will be kept away from the rest of the England players and wider support team.”

The England squad all tested negative on Monday.

Germany midfielder Leon Goretzka says the team supports the anti-racism gesture of taking a knee even though the players haven’t been doing it at the European Championship.

Goretzka says it’s quite clear that “we want to counter racism and homophobia with diversity. I think you can see that in the way it’s done.”

The Bayern Munich midfielder says goalkeeper Manuel Neuer has been wearing a captain’s armband with the rainbow colors for Euro 2020 games and there are plans for Germany’s stadium to be lit in the colors “which I think is a great idea.”

The England team says every player and member of the coaching staff was negative in the latest round of coronavirus testing.

The PCR tests took place on Sunday. That was two days after the team played Scotland at Wembley Stadium. Scotland says midfielder Billy Gilmour has tested positive for COVID-19.

England says officials remain in contact with Public Health England and that the squad trained on the eve of the final Group D match against the Czech Republic on Tuesday.

France forward Ousmane Dembele has been ruled out of the European Championship because of a knee injury sustained during the team’s 1-1 draw with Hungary on Saturday.

The French soccer federation says Dembele had X-rays at a hospital in Budapest on Sunday and the recovery time “is incompatible with keeping him in the squad.”

Teams cannot replace injured players during the tournament so France will have only 25 for the rest of Euro 2020.

Dembele came on as a second-half substitute and was later replaced.

Scotland midfielder Billy Gilmour has tested positive for the coronavirus and will have to isolate for 10 days.

Gilmour will miss his team's final Group D match against Croatia on Tuesday and a potential round of 16 match.

Gilmour played on Friday in a 0-0 draw against England at Wembley Stadium.

Denmark has one more chance to qualify for the round of 16 at the European Championship.

The Danes have lost both of their matches so far at Euro 2020 and have played most of the time without Christian Eriksen after he collapsed on the field against Finland in the opener. He suffered cardiac arrest late in the first half of that game and had to be resuscitated with a defibrillator.

But Denmark can still get enough points to advance from Group B if the team beats Russia in Copenhagen and Belgium tops Finland in St. Petersburg.

Ukraine and Austria will face each other in Bucharest knowing a draw is likely to be enough for both to advance. The Netherlands has already won Group B and North Macedonia has already been eliminated.

The Dutch will take on North Macedonia at the same time in Amsterdam.