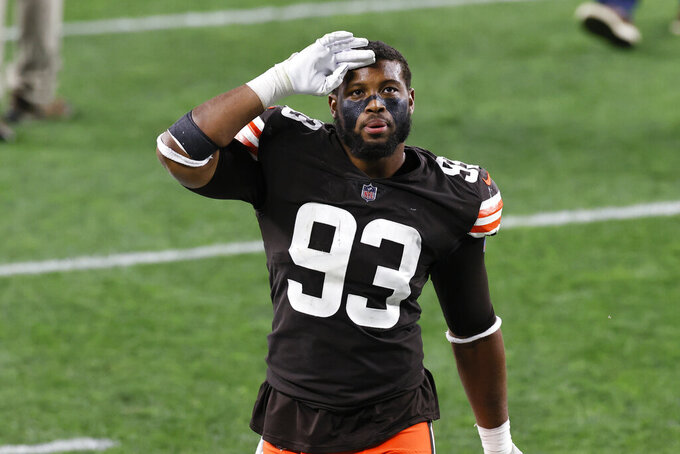 FILE - In this Oct. 11, 2020, file photo, Cleveland Browns middle linebacker B.J. Goodson (93) celebrates after the Browns defeated the Indianapolis Colts 32-23 during an NFL football game, in Cleveland. The Browns will try to earn a playoff spot without starting linebacker B.J. Goodson, who will miss the game on Sunday, Dec. 27, against the New York Jets after testing positive for COVID-19. (AP Photo/Ron Schwane, File)

COVID-19 issues in Arizona State’s men’s basketball program have led to the postponement of Thursday’s game at Washington State.

The schools will work with the Pac-12 Conference to reschedule the game.

No announcement about Arizona State’s game at Washington on Saturday has been made. The Sun Devils also had their Dec. 22 game against Utah postponed due to a positive coronavirus case in the Utes program.

The additions mean the Browns have eight players currently out as they prepare for their season finale with Pittsburgh while trying to make the playoffs.

It’s not yet known if Sendejo and Bryant tested positive or were in close contact with an infected person. The team is not required to make that distinction.

If they are positive, the players would miss 10 days and would sit out Sunday’s game.

Wide receivers Jarvis Landry, Rashard Higgins, rookie Donovan Peoples-Jones, KhaDarel Hodge and linebackers B.J. Goodson and Jacob Phillips are on the list. Goodson is the only one who has tested positive.

The others are high-risk contacts and are eligible to return to practice Thursday as long as they test negative.

Kupp tops the Rams with 92 catches for 974 yards. He also has three touchdowns in 15 games.

Los Angeles (9-6) could be without its leading passer, rusher and receiver when it faces Arizona on Sunday. Quarterback Jared Goff won’t play after having surgery on his right thumb Monday, and running back Darrell Henderson is out with a high ankle sprain.

The Rams need a win or a loss by the Chicago Bears to clinch a playoff spot.

The Tennessee Lady Vols have paused team activities and postponed their next two games because of a positive COVID-19 test, contact tracing and the quarantining of players.

The Lady Vols (6-1) had been scheduled to play at No. 9 Texas A&M on Thursday and host No. 13 Kentucky on Sunday. Both games now have been postponed under the Southeastern Conference’s COVID-19 management requirements.

Tennessee wrapped up its non-conference schedule Monday night with a 77-52 win over Lipscomb, and all of the Lady Vols’ Tier 1 personnel had negative PCR and rapid antigen tests within 36 hours of that game. The positive test was administered Monday with the result coming back Tuesday morning.

The Tennessee Titans could be without both their kicker and punter in their regular season finale.

The Reserve/COVID-19 list is for any player who has tested positive for COVID-19 or has quarantined after being in close contact with someone infected with the novel coronavirus.

Tennessee (10-5) visits Houston on Sunday needing a win or an Indianapolis loss to clinch its first AFC South title since 2008. The Titans have kicker Sam Sloman and punter Trevor Daniel on the practice squad if neither Gostkowski nor Kern is cleared from the list before Sunday.

The Texas Bowl has been canceled because of an increase of positive COVID-19 tests within TCU’s program, becoming the 19th bowl canceled this season.

The Horned Frogs were supposed to play Arkansas on New Year’s Eve in Houston.

TCU Athletic Director Jeremiah Donati says a combination of COVID-19-related issues, injuries and other circumstances in the past 24 hours pushed the team below the established Big 12 Conference threshold for student-athlete availability that’s been in effect all season. He says that’s too much to overcome on such short notice.

It was the third game canceled since the bowl lineup was set earlier this month, with all of those involving SEC teams. The Gasparilla Bowl matching South Carolina against UAB was previously canceled, as was Missouri-Iowa in the Music City Bowl. Tennessee had to pull out of the Liberty Bowl, but Army replaced the Volunteers to face West Virginia.

The Cleveland Cavaliers will be allowed roughly 2,000 fans at home games after being granted a state variance.

The NBA team had been permitted only 300 fans inside Rocket Mortgage FieldHouse due to COVID-19 restrictions. The team made a formal request last month to the Ohio Department of Health, which approved 10% of capacity in the 19,000-seat downtown arena.

Only some season-ticket holders and players’ family members and guests had been at Cleveland’s first two games.

The Cavs are 3-0 for the first time since 2016. After hosting New York on Tuesday night, they’ll play six consecutive road games before returning to Cleveland to host the Memphis Grizzlies on Jan. 11, when the new fan limit will take effect.

The SMU women’s basketball team has decided not to play the remainder of its 2020-21 season, with players opting out because of health and safety concerns surrounding COVID-19.

The school said in a statement that while the players agreed that all possible steps and precautions had been taken to keep them healthy and safe, they decided “that the totality of the circumstances was resulting in an in-season experience that they did not wish to prolong.”

Athletic director Rick Hart said it was a difficult decision for the players to make, and that the school supported them.

Other SMU programs will continue to compete as scheduled.

The results bring the totals since the beginning of August to 222 players and 396 other personnel who were confirmed positive cases out of approximately 881,510 tests administered.