The Latest: Australia leader to go slow on Pfizer vaccine 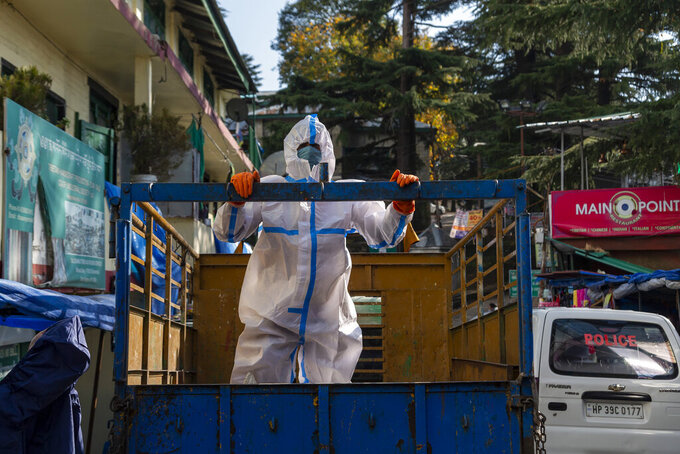 A government health worker in protective suit waits to sanitise a street shut down to prevent the spread of the coronavirus in Dharmsala, India, Thursday, Dec. 10, 2020. (AP Photo/Ashwini Bhatia)

CANBERRA, Australia — Australia’s prime minister says his government will not rush approval of Pfizer’s coronavirus vaccine because he wants Australians to have confidence in the product.

Prime Minister Scott Morrison said Friday that Australia is in a different position to Britain, which has given emergency approval to the roll out, and to the United States, which is near final approval for the vaccine’s use.

Morrison says he wants Australians to have “absolute full confidence that when it gets the tick, they can get the jab.”

The government expects the Australian regulator to approve the vaccine produced jointly by Pfizer and BioNTech by late January. The Australian roll out is expected to be underway by March.

U.S. experts are convening to decide whether to approve the Pfizer vaccine. Food and Drug Administration advisers are scrutinizing the company’s data for any red flags or oversights. If approved, shots could begin within days for health care workers and people in nursing homes.

U. S. lawmakers are trying to hammer out a COVID-19 relief bill. That comes as US jobless claims jumped to 853,000 amid a resurgence of the virus. More than 19 million people rely on some type of unemployment benefit, and unless Congress acts soon, nearly half will lose that aid in just over two weeks.

WASHINGTON — A U.S. government advisory panel has endorsed Pfizer’s coronavirus vaccine, in a major step toward an epic vaccination campaign that could finally conquer the outbreak.

The Food and Drug Administration is expected to follow the recommendation issued Thursday by its expert advisers.

The group concluded that the shot appears safe and effective against the coronavirus in people 16 and older.

A final FDA decision is expected within days. Shots would then begin for health care workers and nursing home residents. Widespread access to the general public is not expected until the spring.

SANTA FE, N.M. — New Mexico health officials have issued orders that could limit nonessential surgeries and prepare for rationing of other medial services as the coronavirus pandemic strains resources and personnel at hospitals and intensive care centers.

One of the orders from the state Department of Health allows hospitals and acute-care facilities to limit surgeries. The second changes liability standards for emergency medical providers as the state prepares for possible triage procedures that might limit care to some individuals.

Gov. Michelle Lujan Grisham said the orders go into Friday and will last until at least Jan. 4.

CANBERRA, Australia — Australian researchers say they have abandoned development of a potential coronavirus vaccine because it produced false positive results on HIV tests.

A statement said Friday that the University of Queensland vaccine that was to be manufactured at Australian biopharmaceutical company CSL’s Melbourne headquarters proved safe and produced a “robust response” to the virus during initial trials.

But it said the researchers and the government agreed not to proceed further because of the false positive result of some HIV tests due to a protein contained in the potential vaccine.

It was one of five potential vaccines on which the Australian government had signed contracts with developers.

OKLAHOMA CITY -- Some Oklahomans who lost wages due to the coronavirus pandemic will receive $400 from the state starting next week.

Oklahoma Employment Security Commission Director Shelley Zumwalt said Thursday the one-time payments will be going to to over 120,000 Oklahomans.

Zumwalt says the agency received permission from the Federal Emergency Management Agency to distribute Lost Wage Assistance funds to anyone who received $100 in benefits from any claim type and certify their employment was affected by the coronavirus pandemic during the week of Sept. 6-12.

TOPEKA, Kan. — Kansas does not plan to send personal information to the federal government about residents who receive coronavirus vaccines, though it has signed a data-use agreement with the CDC.

A spokeswoman for the Kansas Department of Health and Environment said Thursday in a text to The Associated Press that it signed a data-use agreement with the CDC “a while ago” but it “won’t be providing any identifying information.”

The CDC’s standard agreement calls for collection of data about vaccine recipients, including a person’s name, address and birthday. The CDC says the information will help determine how vaccines are distributed, monitor their safety and effectiveness, and identify places that are under-vaccinated.

The chief of the state health department said earlier this week that Kansas officials worry that sending personal information could discourage people from getting vaccinated.

CAIRO — Egypt has received its first shipment of a Chinese coronavirus vaccine, which was tested in the United Arab Emirates and is said to be 86% effective.

The shipment by Chinese state-owned pharmaceutical giant Sinopharm landed at Cairo’s international airport from the UAE on Thursday.

A health ministry statement says the government will first vaccinate health care workers, particularly those who deal with COVID-19 cases.

HARRISBURG, Pa. — Pennsylvania is halting school sports and other extracurricular activities, ordering gyms, theaters and casinos to close and banning indoor dining at restaurants in response to the worsening pandemic.

A day after telling Pennsylvanians of his own COVID-19 diagnosis, Gov. Tom Wolf announced the widely expected clampdown Thursday. He said it aims to slow the accelerating spread of the coronavirus and prevent hospitals from becoming overrun.

“We all hoped it would not come to this,” Wolf said at a virtual news conference, but “we need to slow the spread to save lives.”

TORONTO — Canada’s most populous province will begin administering COVID-19 vaccinations at hospitals in Toronto and Ottawa on Tuesday.

Ontario Premier Doug Ford says a small number of doses are expected to arrive in the province in the coming days.

Ford says health care workers in long-term care homes and other high-risk settings will be the first to receive the vaccines.

GREENVILLE, S.C. — Vice President Mike Pence has traveled to South Carolina to talk about coronavirus vaccines, as cases are rising in the state.

Pence participated in a roundtable discussion with Gov. Henry McMaster and local leaders about two vaccines, both likely to receive FDA approval for use in the next week.

Pence says the government’s virus task force has “cut no corners in the development of this vaccine. We have cut red tape.”

State health officials plan to give vaccines first to health care workers and nursing home patients. Federal officials hope to have the vaccine available to the general public by the end of June.

South Carolina is averaging nearly 2,500 new cases a day, about 600 more than at the summer peak.

The airport board has approved the testing inside an airport terminal beginning Jan. 4 for people who are flying or have flown in the previous three days.

Costs will range from $70 for a rapid antigen test to $185 for a full respiratory test.

The State Department of Health reported 2,460 new cases of the virus and 35 more deaths on Thursday.

MISSION, Kan. — The U.S. has set records for deaths and hospitalizations.

The U.S. recorded 3,124 confirmed deaths on Wednesday, the highest one-day total yet, according to Johns Hopkins University. That’s more than the toll of 2,977 killed on Sept. 11, 2001.

More than 106,000 Americans are hospitalized.

Until last week, the peak was 2,603 deaths on April 15, when New York City was the epicenter of the nation’s outbreak.

The pandemic has killed more than 290,000 people in the U.S., with more than 15 million confirmed infections.

Health Secretary Matt Hancock says the mass testing will cover parts of London and the neighboring areas of Essex and Kent counties. Children ages 11 to 18 will be tested whether or not they have symptoms.

Hancock says the testing will be done so schools could stay open, “because that is both right for education and for public health.”

Hancock says infections are starting to rise in some areas after falling during a four-week national lockdown in England that ended Dec. 2. The virus is spreading fastest among older children, health officials say.

Britain has confirmed more than 63,000 coronavirus-related deaths, the highest in Europe.

The 71-year-old Hinch, who was sworn in as leader of the newly Republican-led Legislature only a week ago, died Wednesday.

He was starting his seventh two-year term in the state House. He previously served as majority leader for the 2016-17 session and as minority leader when Democrats were in control the last two years.

LOS ANGELES — Ellen DeGeneres says she has tested positive for the coronavirus but is “feeling fine right now.”

Production on her daytime talk show has been paused until January, producer Telepictures said in a statement that followed DeGeneres’ Thursday announcement.

The Supreme Judicial Court on Thursday rejected a challenge brought on behalf of a group including salon owners, pastors and a private school. They accused the Republican of exercising “legislative police power” by declaring a state of emergency.

Baker announced this week that Massachusetts would tighten some restrictions as cases rise. The court rejected the lawsuit’s argument that the governor’s actions infringe on due process and free assembly.

South Africa recorded 6,700 new cases on Wednesday, the most since August.

Mkhize warned that hospital capacities could be overwhelmed in some regions.

South Africa’s surge highlights that a new wave of the disease is sweeping across the continent, according to the head of the Africa Centers for Disease Control and Prevention.

The Honolulu Star-Advertiser reports the state Department of Health made its initial trial order with Pfizer for 4,875 doses. The December order will be used to provide the priority group with the first of two doses, which require a minimum 28 days in between injections. The vaccine will be free.

Meanwhile, Hawaii’s biggest surfing competition has started amid concerns about the spread of the coronavirus among fans.