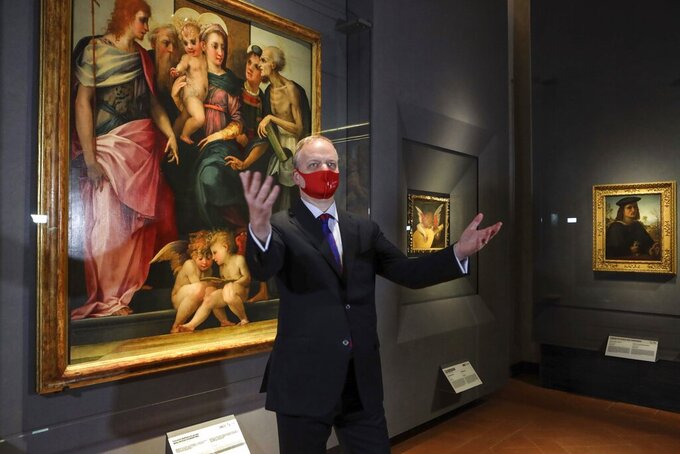 Uffizi director Eike Schmidt poses on the occasion of the Uffizi Gallery museum reopening to the public, in Florence, Italy, Tuesday, May 4, 2021. The Uffizi Gallery reopened to visitors after a shutdown following COVID-19 containment measures. (Giuseppe Cabras/LaPresse via AP)

Prime Minister Scott Morrison said Wednesday that the pause of flights that began last week will continue until May 15.

Lawyers are planning a legal challenge to the government’s ability to prevent around 9,000 citizens and permanent residents from returning home from India.

— FDA expected to OK Pfizer vaccine for teens within week

LANSING, Mich. — Michigan is lifting a pandemic mandate requiring masks to be worn outdoors, except for gatherings of at least 100 people and organized contact sports.

Under an order that takes effect Thursday, the state also is easing caps on the size of outdoor events and says vaccinated people are not required to be masked at indoor residential gatherings.

DETROIT — Teams of canvassers from Detroit’s health department have been fanning out across city neighborhoods to educate residents on where to get free COVID-19 vaccines.

Detroit’s door-to-door campaign is the latest in its efforts to connect residents to vaccination sites across a city with predominantly Black residents.

Various campaigns also are happening in Black and other communities of color across the U.S. to persuade people that COVID-19 vaccines are safe and effective.

Detroit has been urging people to get vaccinated against the virus, which has already killed more than 2,000 of its residents. Only about 31% of Detroit adults have received at least one dose.

OLYMPIA, Wash. — Washington Gov. Jay Inslee says all counties will remain in their current phase of the state’s economic reopening plan, avoiding more restrictions because coronavirus cases are leveling off.

Inslee says there will be a two-week pause as the state continues to evaluate coronavirus activity in the state. The surprise announcement comes as several more counties were expected to roll back to Phase 2 of the plan, which includes reduced capacity for indoor dining and gyms, based on case counts and hospitalizations.

But Inslee says the most recent weekend data from the Department of Health shows coronavirus activity reaching a plateau in the state. Inslee’s move is at odds with neighboring Oregon, where Gov. Kate Brown last week imposed more severe restrictions due to a new coronavirus wave.

Washington and Oregon were among the first states to implement sweeping restrictions in the early days of the pandemic.

Only 39% of people in Oklahoma have received at least one shot, which ranks 38th in the nation, according to the CDC. About 28% are fully vaccinated.

The emergency declaration eased some licensing restrictions for medical professionals and gave state agencies more flexibility to shift funding and employees to respond to the pandemic.

The ending of the emergency will require governmental bodies to begin meeting in person within 30 days.

WASHINGTON — The White House says President Joe Biden is setting a new vaccination goal to deliver at least one dose to 70% of adult Americans by July 4.

This comes as the administration pushes to make it easier for people to get shots and to bring the country closer to normalcy. The new goal includes fully vaccinating 160 million adults by Independence Day.

That comes as demand for vaccines has dropped off markedly nationwide, with some states leaving more than half their vaccine doses unordered. Biden will call for states to make vaccines available on a walk-in basis and will direct many pharmacies to do the same.

So far, more than 56% of American adults have received at least one dose of a COVID-19 vaccine and nearly 105 million are fully vaccinated.

The U.S. is currently administering first doses at a rate of about 965,000 per day — half the rate of three weeks ago, but nearly twice as fast as needed to meet Biden’s target.

ROME — Italian Premier Mario Draghi says Italians will have a national green pass, allowing them to travel across regions, later this month.

Draghi was addressing the opening of a Group of 20 meeting on tourism, saying “Italy is again ready to host the world.”

Draghi didn’t offer details of the national pass, but he says it will be ready a full month before the EU’s plans to roll out a certificate making it easier for citizens to travel between countries during the summer.

The EU certificate will allow tourists to travel without quarantine if they have recovered from COVID-19, been vaccinated or present a negative test.

Italians currently can travel freely between regions under the lowest level of restrictions, which currently covers most of the country excluding tiny Aosta on the French border, and the southern regions of Puglia, Basilicata, Calabria, Sicily and Sardinia.

BAGHDAD — Iraq’s health minister has resigned over a week after a deadly fire ripped through a Baghdad hospital for coronavirus patients and killed dozens.

A statement from Iraq’s prime minister says Health Minister Hasan al-Tamimi’s resignation request was approved Tuesday. The resignation came hours after the Cabinet voted on recommendations of an investigative committee that probed the catastrophic fire at Ibn al-Khatib hospital.

It is unclear what impact al-Tamimi’s departure will have on the Health Ministry’s pandemic response policies as Iraq grapples with a severe wave of the coronavirus.

BOSTON — Massachusetts restaurants that have struggled to stay open during the coronavirus pandemic are being offered a lifeline of up to $10 million through a federal relief program.

U.S. Rep. Ayanna Pressley says the money is available through the $28.6 billion Restaurant Revitalization Fund, part of the $1.9 trillion American Rescue Plan passed last month. The fund will provide restaurants and other eligible businesses with funding equal to their pandemic-related revenue loss up to $10 million per business.

The relief doesn’t have to be repaid, provided the funds are put toward eligible uses.

WASHINGTON — The Biden administration will begin shifting how it allocates COVID-19 shots to states, moving doses from states with lower demand to those with stronger interest in vaccines, an administration official said.

The change away from a strict by-population allocation comes as demand for the coronavirus vaccines have dropped nationwide. It’s dropped precipitously in some areas, with some states turning down all or part of their weekly dose allotments.

The federal government will now shift some of those doses to areas with higher demand to improve vaccination numbers in those areas.

Governors were informed of the change by the White House on Tuesday. The official spoke on the condition of anonymity before the expected public announcement. The Washington Post first reported the new allocation.

BERLIN — The German government says people who are fully immunized or have recovered from a coronavirus infection will be exempt from contact restrictions and curfews.

Justice Minister Christine Lambrecht says the two groups will be treated the same as people who have tested negative. This means they can go to places, such as the hairdresser, without taking a test.

Cabinet approved the rule changes amid growing pressure to ease pandemic restrictions as more people get vaccinated. Several German states are planning to open tourism in areas with infection rates below 100 weekly cases per 100,000 inhabitants.

The government says full immunization kicks in two weeks after people receive their second dose of vaccine, and people who have recovered from the coronavirus need to provide proof of a positive PCR test no more recent than between 28 days and six months ago.

THE HAGUE, Netherlands — The Dutch government says it is too soon to further ease its coronavirus lockdown because coronavirus admissions to hospitals and intensive care units are still too high.

The government says it will decide in a week whether to take the second step in its roadmap for reopening society. The step may involve reopening outdoor public venues, such as zoos and theme parks, as well as some indoor cultural events.

In its weekly update, the country’s public health institute says positive coronavirus tests fell by 6% compared with the previous week while hospital admissions declined 8%. Admissions to ICUs were nearly unchanged at 377.

Last week, the government allowed bars and restaurants to reopen their outdoor terraces for the first time in six months and eased restrictions on non-essentials shops.

The ban applies to doctors, nurses and other health workers in the public sector and is meant to ensure “the efficiency of the health system” in its fight against COVID-19, local media reported, citing an order from the Health Ministry.

Infections have skyrocketed in recent weeks, prompting authorities to impose a one-week nightly curfew that forbids people from venturing outside their homes from 7 p.m. to 4 a.m. starting May 8.

The government also has restricted all business activity during the day next week, except for grocery stores and pharmacies. Those restrictions cover one of Islam’s biggest holidays, the three-day Eid al-Fitr that marks the end of the fasting month of Ramadan. Traditionally, it’s a time of shopping, feasting and mass gatherings.

Daily cases are now edging toward 1,000. Oman has registered more than 197,800 infections and 2,062 confirmed deaths from the coronavirus.

BRUSSELS — The president of the European Union’s executive arm says a quarter of all EU residents have now received a first dose of coronavirus vaccine.

After a slow start to its vaccination campaign, the European Union has sped up the pace of immunization as vaccine supplies in the 27-nation region increased in recent weeks.

“Vaccination is gaining speed across the EU: we have just passed 150 million vaccinations,” Ursula von der Leyen said in a message posted on Twitter. “A quarter of all Europeans have had their first dose. We’ll have enough doses for vaccinating 70% of EU adults in July.”

The infections and deaths are mounting with alarming speed. A top U.S. health expert warns the coming weeks in the country will be “horrible.”

Dr. Ashish Jha, dean of Brown University’s School of Public Health, says he is concerned Indian policymakers believe things will improve in the next few days.

“I’ve been ... trying to say to them, `If everything goes very well, things will be horrible for the next several weeks. And it may be much longer,’” he said.

India’s official count of coronavirus cases surpassed 20 million Tuesday, nearly doubling in the past three months. The confirmed deaths passed 220,000 in a country of 1.4 billion people, but it is considered an undercount.