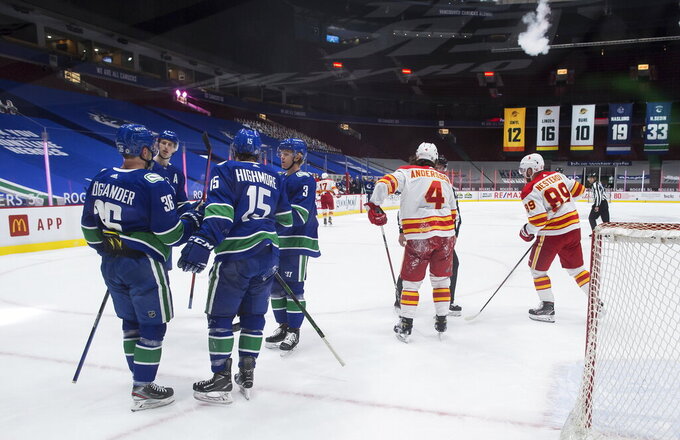 Vancouver Canucks' Nils Hoglander (36), of Sweden, celebrates his goal with Matthew Highmore (15), Jack Rathbone (3) and Tyler Myers (57) as Calgary Flames' Rasmus Andersson (4), of Sweden, and Nikita Nesterov (89), of Russia, skate to the bench during first period of an NHL hockey game in Vancouver, British Columbia, on Tuesday, May 18, 2021. (Darryl Dyck/The Canadian Press via AP)

Baylor is now allowing 100% capacity to all outdoor athletic events on the campus in Waco, Texas, in time for the final home baseball games of the season when the Bears host Big 12 rival Oklahoma for a three-game series that begins Friday night.

The policy will also apply to football games next fall at McLane Stadium, where tailgating will be allowed again, including the boats along the Brazos River. It will also apply at soccer, equestrian, cross country, softball and outdoor tennis. While strongly encouraged, mask wearing is optional.

Dr. Howard Njoo says allowing fans into games is not under “serious consideration” at this point in the COVID-19 pandemic.

Njoo says the risk tolerance is much lower because hockey is played indoors.

The NHL has had all Canadian teams play exclusively in the country this year with no fans at any games. The Edmonton Oilers open the North Division playoffs against the Winnipeg Jets on Wednesday, while the Toronto Maple Leafs start their series against the Montreal Canadiens on Thursday.

The winners square off in the second round before the Canadian survivor faces an American team in the third round.

Njoo says discussions are ongoing to determine if there can be cross-border travel in the third round and/or the Stanley Cup Final.

The Cleveland Indians announced that Progressive Field is returning to full capacity on June 2 and masks will be optional.

There had been a cap of 40% at the downtown ballpark, which holds 35,000 fans. The move to open all the seats comes after Ohio Gov. Mike DeWine ended the state’s COVID-19 health orders.

Cleveland hosts the Chicago White Sox on June 2, the finale of a three-game series.

Also, the team said masks will no longer be a requirement to enter the ballpark.