The Latest: Black police chiefs in Calif. call for reform 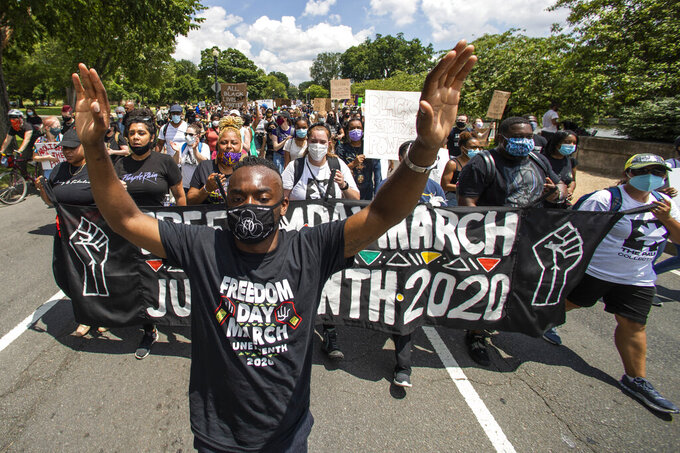 Malik Harris, left, leads protesters as they march towards the Martin Luther King Jr. Memorial in Washington on Friday, June 19, 2020, to mark Juneteenth, the holiday celebrating the day in 1865 that enslaved black people in Galveston, Texas, learned they had been freed from bondage, more than two years after the Emancipation Proclamation. (AP Photo/Manuel Balce Ceneta)

— Cleveland police monitor to examine complaints about handling of protests.

— Tulsa mayor lifts curfew he had imposed for area around Trump's planned rally.

SACRAMENTO, Calif. — Black police chiefs representing departments from across California on Friday called for changing state law so they can immediately fire officers for egregious behavior, with due-process appeals only after the fact.

California has some of the nation’s toughest police disciplinary rules and until last year it had the nation’s most secretive police privacy law.

Coupled with collective bargaining agreements, the chiefs said that prevents the rapid dismissal of officers, in contrast with recent cases in Atlanta and Minneapolis where officers were fired even before criminal charges were brought for the deaths of Black men.

Representatives for police unions and rank-and-file officers did not immediately respond to requests for comment.

CLEVELAND — The team monitoring Cleveland police reforms under a court order will review the actions of officers and supervisors during recent protests over racial injustice.

Arlington, Virginia-based monitor Hassan Aden filed documents Thursday in U.S. District Court in Cleveland requesting information from the city that documents planning for the protests, officer use of force and mass arrest policies.

The court filing says the review comes “amid reports alleging excessive/unnecessary force, lack of preparation, command and control, appropriate personal protection equipment for officers as well as other concerns."

Hassan did not respond to messages seeking comment on Friday. Cleveland did not provide a comment or any officials to respond.

A consent decree was put in place in June 2015 after an investigation and scathing report from the Justice Department that found a “pattern and practice of officers using excessive force and violating people’s civil rights.” It required numerous policy changes, including how and when force is used and how officers are trained and equipped.

Use-of-force incidents and officer injuries have fallen since new policies were implemented.

ST. LOUIS — A march commemorating Juneteenth in St. Louis began at the most appropriate of places — the Old Courthouse where Dred Scott’s lawsuit played out, a pivotal case that led to freeing the slaves.

Marchers walked through stifling heat to St. Louis City Hall, where they issued a list of demands that included defunding police and closing a notoriously overcrowded and unsanitary jail. A small African American boy, marching with his mom, held a sign that read, “Am I next?”

TULSA, Okla. — Tulsa Mayor G.T. Bynum on Friday lifted a curfew that was issued a day earlier for the area where President Donald Trump plans a campaign rally.

A statement on the city’s website says the U.S. Secret Service had asked for the curfew near the BOK Center where Trump is to hold the rally Saturday night, then on Friday asked that the curfew be lifted.

Bynum issued the curfew prohibiting people in the area starting at 10 p.m. Thursday and Friday and ending at 6 a.m. Friday and Saturday, and from the end of the rally on Saturday until 6 a.m. Sunday, including those who had camped there.

“I enacted a curfew at the request of Tulsa Police Chief Wendell Franklin, following consultation with the United States Secret Service based on intelligence they had received,” Bynum said in the statement. “Today, we were told the curfew is no longer necessary so I am rescinding it.”

Trump tweeted earlier Friday that he had spoken to Bynum who told him there would be no curfew, after all.

Tulsa Police Capt. Richard Meulenberg said campers were removed from the curfew zone Thursday night with no trouble and no arrests.

NEW ORLEANS — Community and environmental groups held a Juneteenth ceremony at a Louisiana site archaeologists have described as probably a cemetery for enslaved Africans Americans when the land was a plantation.

“I felt like the ancestors were shouting for joy in heaven. We let them know they were not forgotten,” said organizer Sharon Lavigne of the St. James Parish community group Rise St. James. She said it was her first Juneteenth celebration.

It was held on a small part of the site where FG LA LLC, a local member of Taiwan-based Formosa Plastics Group, has begun construction on a $9.4 billion chemical complex.

BATON ROUGE, La. — Louisiana State University has stripped the name of a segregationist former president from the campus’ main library.

Friday’s action came within hours after the LSU Board of Supervisors unanimously voted for its removal.

A worker used a crowbar and hammer to strike Troy H. Middleton’s name from the building on the Baton Rouge campus. A university spokesman says a plaque and bust honoring Middleton also were removed from the site.

Middleton was LSU president from 1951 until 1962. Middleton, in news reports and letters from his time as president, said he didn’t want Black students on campus.

LSU interim President Tom Galligan recommended the name removal after meetings with Black student leaders, who raised concerns about inequality and the lack of diversity on campus. Galligan also committed to increase hiring of African American faculty and staff, recruitment of students of color and funding for minority programs.

MINNEAPOLIS — Former NFL star and civil rights activist Colin Kaepernick is helping to fund the cost of legal representation for some protesters who were arrested during demonstrations in the days after George Floyd’s death.

The Star Tribune reported Friday that Kaepernick’s Know Your Rights Foundation has donated what’s described as a “substantial” sum to attorneys nationwide.

Kaepernick is the former San Francisco 49ers quarterback who took a knee in 2016 during the national anthem to protest police brutality. He started his Know Your Rights Camp Legal Defense Initiative amid widespread protests following Floyd’s death.

A message on the fund’s website says: “When there is an injustice within our community, it is our legal right to address it, by any means necessary.”

The fund won’t say how much money has been raised. Ben Meiselas, a Los Angeles civil rights lawyer and general counsel for the initiative, called the effort “a significant undertaking with some of the top legal professionals.”

Floyd, a Black man who was handcuffed, died May 25 after a white Minneapolis police officer pressed a knee into Floyd’s neck, ignoring his cries that he couldn’t breathe. That officer has been charged with multiple counts, including second-degree murder. Three other officers also face charges.

WASHINGTON — Multiple Juneteenth marches and protests are working their way through the nation’s capital, with most planning to converge later in the evening on the recently renamed Black Lives Matter Plaza across from the White House.

“It’s still a protest, not a party,” organizer Ron Moten said. “We’re talking to people as we go and giving out information along with the music.”

“They can kill our leaders! Lord knows they have. But they cannot kill a movement,” activist Joella Roberts said over a bullhorn. “Don’t be scared. That’s what they thrive on — fear and ignorance.”

CHICAGO — Hundreds of people participated in upbeat and celebratory marches through downtown Chicago on Friday, part of events citywide to mark Juneteenth, which commemorates the emancipation of enslaved African Americans.

People gathering before one morning march danced to music played by a small marching band before hundreds marched into the city’s downtown Loop. Participants kept up the festive atmosphere, chanting and singing along the route that wrapped up near City Hall.

Juneteenth events across the U.S. this year are infused with activism, driven by nationwide protests demanding changes in policing following the deaths of Black men and women during encounters with law enforcement officers.

“The march was so fun. We all danced and celebrated our holiday that people often forget about,” 24-year-old Denise Richards told the Chicago Sun-Times. “But we are also here to demand justice for our people who have been brutalized by police.”

Illinois Gov. J.B. Pritzker, Lt. Gov. Juliana Stratton and U.S. Sen. Tammy Duckworth — all Democrats — were among the participants of another march. They traveled alongside demonstrators carrying two large banners bearing George Floyd’s name and photo as the group wound through Grant Park.

NEW YORK — New York City Mayor Bill de Blasio announced on Friday that Juneteenth will be an official holiday for city workers and schoolchildren next year, and that the city will form a new commission to examine its history of racial discrimination.

Even without an official holiday, New Yorkers were outside marking the moment. Jacqueline Forbes, a Jamaican immigrant from Queens, said she wants Juneteenth to carry a meaning akin to July 4th.

“Black people came here against their will and made America what it is today,” she said on the Brooklyn Bridge. “This is something we need to celebrate.”

The River Parishes Tourist Commission, representing an area just up the Mississippi River from New Orleans, had already planned to drop the plantation reference by the end of this year — a decision made in 2018. More recent plans had called for the plantation slogan to be retired in July, commission executive director Buddy Boe said Friday.

Boe said the new “Louisiana River Parishes” promotion will stress the region’s “whole story.” That includes architecture, cuisine, music, outdoor sports and diverse cultures — as well as the cruel history of slavery on the region’s plantations.

PHILADELPHIA — Although Philadelphia’s biggest Juneteenth parade and festival was canceled this year due to the coronavirus outbreak, several other celebrations popped up throughout the city on Friday as groups commemorated the date that enslaved African Americans were emancipated.

Several marches were held to mark the day and protest racial discrimination. Among them was a gathering in Philadelphia of roughly 200 people, mostly Black men dressed in black T-shirts, who marched peacefully down several city streets before concluding the event at a nearby park.

Meanwhile, many community and student-led groups held picnics or hosted other events — such as food drives — to promote freedom and community unity.

Philadelphia this week joined other cities that have designated Juneteenth as an official holiday. Many other cities nationwide and some states are also considering similar action.

President Abraham Lincoln first issued the Emancipation Proclamation declaring all slaves free in Confederate territory on Sept. 22, 1862, but the news took time to travel. June 19, 1865, is the date when word of the proclamation reached African Americans in Texas.

More news about the death of George Floyd at https://apnews.com/GeorgeFloyd