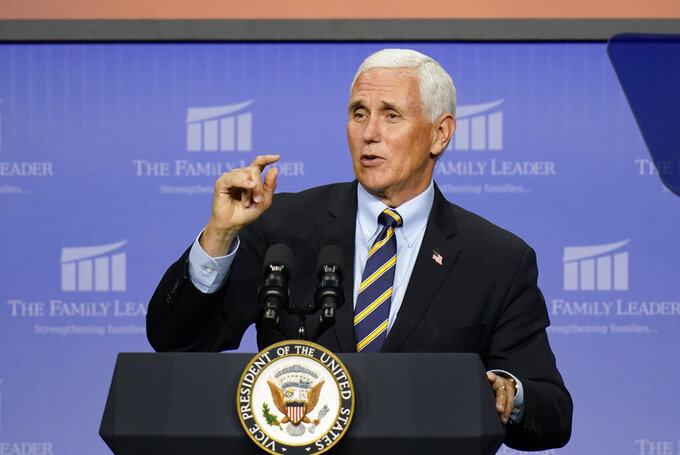 WASHINGTON (AP) — The Latest on coronavirus infections hitting President Donald Trump and others (all times EDT):

The results come five days after Biden spent more than 90 minutes on the debate stage with President Donald Trump. The president was diagnosed with COVID-19 days after the debate, and he remains hospitalized.

Biden had two negative tests on Friday, as well.

Biden is scheduled to travel Monday to Florida. His campaign said it will continue to observe public health guidelines on masks, social distancing and crowd sizes.

Attorney General William Barr will self-quarantine out of caution after President Donald Trump and several other lawmakers and aides tested positive for the coronavirus.

Justice Department spokesperson Kerri Kupec said Sunday that Barr has had four COVID-19 tests since Friday, and all have come back negative. She says he will self-quarantine for several days out of an abundance of caution.

Barr attended one meeting at Justice Department headquarters on Friday and stayed home during the weekend, except to be tested. He plans to remain home for several days.

Barr attended the White House event for Supreme Court nominee Amy Coney Barrett last weekend and was seen on video having a conversation with former Trump aide Kellyanne Conway, who has tested positive for coronavirus. Neither was wearing a mask.

President Donald Trump is itching to get back out onto the campaign trail — and even attend the second presidential debate — if his doctors clear him to travel.

White House press secretary Kayleigh McEnany said on Fox News that Trump is “very hopeful about getting out there in short order when the doctors deem it appropriate.”

Trump tested positive for the coronavirus late Thursday, two days after debating Democratic nominee Joe Biden in Cleveland and two weeks to the day before their next scheduled face-off in Miami.

He has been hospitalized at Walter Reed National Military Medical Center since Friday afternoon. He briefly left the hospital Sunday, riding in a vehicle to greet supporters gathered outside.

President Donald Trump briefly left the military hospital where he is being treated for COVID-19, riding in a vehicle to greet supporters gathered outside.

Trump departed the hospital in an armored SUV and remained in the vehicle as he drove past a flag-waving and cheering crowd outside Walter Reed National Military Medical Center.

Trump teased his surprise departure in a brief video posted to his Twitter page.

“I also think we’re going to pay a little surprise to some of the great patriots that we have out on the street,” he said, after thanking the doctors at the facility.

Trump did not alert the pool of reporters who are supposed to travel with him before leaving the hospital.

More than seven months into the coronavirus pandemic, in which he has faced bipartisan criticism for playing down the disease, Trump said in the video that he had “learned a lot” about the virus getting it himself.

“I learned it by really going to school,” he said. “This is the real school, this isn’t the ‘let’s read the books’ school. And I get it and I understand it. And it’s a very interesting thing.”

State and county officials in New Jersey are contacting more than 200 people who were at President Donald Trump's Bedminster golf club for Thursday’s campaign fundraiser and asking them to monitor for possible coronavirus symptoms.

If they were in close contact with the president or his staff, they are being asked to quarantine for 14 days. Officials recommend waiting five to seven days from the event to get a COVID-19 test to prevent false negatives.

Trump announced early Friday that he and his wife had tested positive for the novel coronavirus. According to a statement issued Sunday, the White House sent the New Jersey officials a list of 206 attendees.

Meanwhile, Somerset County officials are contacting employees who worked the event, most of whom live in the county.

White House spokesman Judd Deere said in a statement that a full contact tracing, consistent with guidelines from the Centers for Disease Control and Prevention, was completed for the president's Bedminster trip. Trump did not have any interactions with Bedminster staff or guests that would be considered to be “close” based on the guidelines, Deere said.

All White House staff considered to be in close contact during the trip have been identified, contacted and recommended to quarantine, Deere said.

Pelosi said Sunday on CBS' “Face the Nation”: “We need to have trust that what they’re telling us about the President’s condition is real.”

Her interview aired before the president’s medical team held a news conference at Walter Reed National Military Medical Center, where he is receiving treatment.

Pressed about the conflicting information he and the White House released the day before, Navy Cmdr. Dr. Sean Conley acknowledged Sunday that he had tried to present a rosy description of the president’s condition. The doctor also said Trump’s blood oxygen level dropped suddenly twice in recent days, but he “has continued to improve” since then.

Pelosi says she's worried that the information the doctors are relaying to the public “has to be approved by the president. That’s not very scientific.”

Vice President Mike Pence and his wife, Karen, have tested negative again for the coronavirus days after President Donald Trump and first lady Melania Trump were diagnosed with COVID-19.

Despite the president’s hospitalization, Pence is expected to resume regular campaigning this week with no changes to protocols meant to keep him from getting infected.

President Donald Trump’s physician says he was trying to “reflect the upbeat attitude” of the president and his medical team when he declined to share Saturday that Trump was placed on oxygen the day before.

Navy Cmdr. Dr. Sean Conley was pressed Sunday on why his rosy picture of the president’s health was contradicted moments later by White House chief of staff Mark Meadows, who expressed that the medical team was very concerned with the president’s health Friday morning when he experienced a drop in his blood oxygen levels and had a high fever.

Said Conley: “I was trying to reflect the upbeat attitude of the team, that the president, that his course of illness has had.”

He added that he “didn’t want to give any information that might steer the course of illness in another direction. And in doing so, came off like we’re trying to hide something, which wasn’t necessarily true.”

President Donald Trump’s team of doctors says he is doing well after his COVID-19 diagnosis and could be discharged as early as Monday to continue his treatment.

Dr. Brian Garibaldi, a specialist in pulmonary critical care, said Trump received a second dose of the experimental drug remdesivir along with a first dose of dexamethasone Saturday and isn’t showing any side effects “that we can tell.”

He said Sunday that Trump is “up and well” and the plan was to have him “out of bed” Sunday as much as possible.

Garibaldi and Trump’s doctor, Dr. Sean Conley, said if things continue to go well, Trump will be able to return to the White House on Monday to continue his five-day course of remdesivir treatment and other appropriate therapy.

The president’s physician says President Donald Trump was treated with a steroid after a drop in oxygen levels on Saturday.

Dr. Sean Conley said at a news conference on Sunday that he was given the steroid dexamethasone while he was hospitalized at Walter Reed National Military Medical Center.

Conley said the president’s oxygen level had dropped down to 93% on Saturday. He says the president did not feel short of breath.

He says the president’s medical team is hoping Trump will be up and about, out of bed and eating and drinking throughout the day.

President Donald Trump’s doctors are set to brief the public on his condition late Sunday morning after he spent a second night hospitalized with COVID-19.

Navy Cmdr. Dr. Sean Conley, the president’s physician, and the rest of his medical team are expected to provide an update on Trump’s treatment at Walter Reed National Military Medical Center. The briefing is expected to begin at 11:30 am.

Saturday’s briefing featured mixed messages, as Conley painted a rosy picture of the president’s health, only to see White House chief of staff Mark Meadows later say officials were very concerned with the president’s condition before he was hospitalized.

A small group of Trump supporters gathered outside the hospital on Sunday, some waving large blue Trump flags and others holding smaller American flags and Trump-Pence reelection signs. The song “God Bless the U.S.A.” played in the background, occasionally interrupted by the supportive honking of a car horn, as the group waved the flags and paced back-and-forth outside the entrance to the military installation. A much larger group had gathered Saturday night cheering for the president.