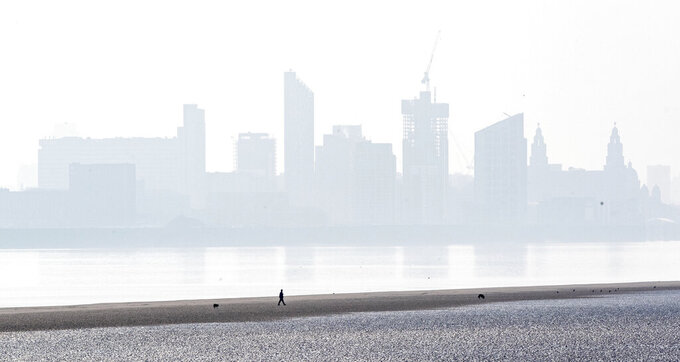 A man walks his dogs along the River Mersey on New Brighton Beach in Liverpool, England, as the UK continues in lockdown to help curb the spread of the coronavirus, Saturday April 11, 2020. The highly contagious COVID-19 coronavirus has impacted on nations around the globe, many imposing self isolation and exercising social distancing when people move from their homes. ( / PA via AP)

Bill Beaumont is facing a late challenge to his bid for re-election as World Rugby chairman from his current vice chairman.

Former Argentina and Bristol captain Agustin Pichot tweeted he was running against Beaumont for the role at rugby union's governing body.

The 45-year-old Pichot said the crisis caused by the coronavirus outbreak was an opportunity for “global realignment” of rugby.

Pichot, who also had a spell with Richmond in the late 1990s, wrote: “It is a critical time and a critical election. The current crisis is an opportunity for the global realignment of our game. We cannot miss it."

The election is due to be held in May.

The 69-year-old former Celtic, Scotland and Liverpool forward was hospitalized on Wednesday for treatment on gallstones and subsequently tested positive for COVID-19 despite not showing symptoms.

Dalglish won eight league championships and three European Cups across spells as player and manager for Liverpool, while also guiding Blackburn to the Premier League title in 1994-95.

In a statement on Liverpool’s official website, Dalglish said: “Thank you for all of your well wishes over the last few days. I’m delighted to be back home with the family after receiving brilliant care from the NHS, which we appreciate now more than ever.”

Dalglish has gone into self-isolation at home and urged the public to do everything possible to slow the spread of the virus.

Real Sociedad plans to have its players resume training individually this week. It would make it the first Spanish club to resume activities during the coronavirus pandemic.

The club says players will have the option to start practicing at the team’s training center after the Spanish government decided to ease some of its lockdown measures.

Non-essential workers will be allowed to return to their positions this week while observing social-distancing guidelines and other restrictions. Group activities will remain prohibited as Spain enters its fifth week of confinement because of the pandemic.

It was not yet clear whether the government will allow Real Sociedad to open its training center, though, as most sports facilities are still supposed to remain closed.

Real Sociedad says players have been training at home for the last month. The club prepared individual training routines for players and sent them stationary bicycles and treadmills.

Spain has reported its lowest daily growth in confirmed coronavirus infections in three weeks, with the total at about 166,000.