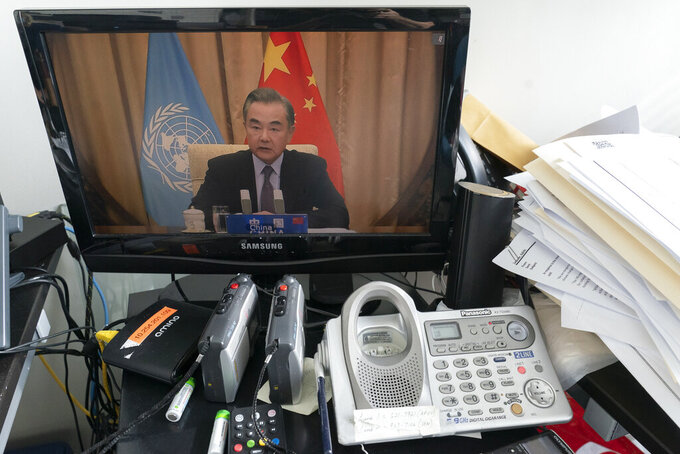 Chinese Foreign Minister Wang Yi is seen on a computer monitor at United Nations headquarters as he speaks during a virtual high-level meeting of the United Nations Security Council meeting on safeguarding international peace and security and global governance in the post-COVID-19 era happening during the 75th session of the United Nations General Assembly, Thursday, Sept. 24, 2020. (AP Photo/Mary Altaffer)

China, the United States and Russia have traded allegations at the United Nations about who mishandled and politicized the coronavirus pandemic.

It was one of the few real-time exchanges among top officials at the virtual U.N. General Assembly gathering. The remarks Thursday at the Security Council’s ministerial meeting on the assembly’s sidelines reflected deep divisions among the three veto-wielding council members that have escalated since the virus emerged in China.

Chinese Foreign Minister Wang Yi stressed the importance of U.N.-centered multilateralism and alluded to countries — including the U.S. — opting out of making a COVID-19 vaccine a global public good available to people everywhere.

Russian Foreign Minister Sergey Lavrov said the pandemic and its “common misfortune did not iron out interstate differences, but to the contrary, deepened them.”

Libyan Prime Minister Fayez Sarraj is calling for U.N. support in holding presidential and parliamentary elections as the war-torn country remains split between rival administrations in the east and west, each backed by armed groups and foreign governments.

Sarraj said elections next year could lead to democracy and end Libya’s “legitimacy crisis." While he called for political dialogue with all factions and regions of Libya, he said the exception would be those who’ve ”spilled Libyan blood."

Sarraj delivered his prerecorded remarks to the world body’s first-ever virtual General Assembly from Tripoli, where his U.N.-backed government is based. He is aided by Turkey and Qatar. His rival, Khalifa Hifter, controls the east and is backed by neighboring Egypt, the United Arab Emirates, France and Russian mercenaries.

Sarraj slammed Hifter’s attempted offensive on Tripoli last year, calling it a “tyrannical attack” that attempted to return the country to dictatorship.

Another COVID-19 problem that the U.N. is trying to solve: how to help more than 300,000 merchant mariners trapped at sea because of virus restrictions.

Saying many seafarers are at a “breaking point” after as much as a year away from home, Captain Hedi Marzougui pleaded their case Thursday at a U.N.-organized meeting with shipping executives and government transport officials.

He described his own experience stuck aboard his ship as the pandemic washed over the world and made shipping crews unwelcome in many ports.

But they lamented a lack of international coordination, calling for more cooperation and new rules to protect countries from the virus while respecting the rights of stranded merchant mariners.

The king of the small island-nation of Bahrain used his appearance before world leaders to defend his nation’s decision to formalize ties with Israel.

In a prerecorded address for the virtual U.N. General Assembly, King Hamad bin Isa Al-Khalifa also expressed support for an independent Palestinian state, with east Jerusalem as its capital. It's a position that Palestinians say is undermined by formalizing ties with Israel before concessions are made in peace talks.

Bahrain agreed to normalize relations with Israel two weeks ago following a similar move by the United Arab Emirates in August. Palestinians have slammed the agreements brokered by the Trump administration as acts of betrayal.

The king said a two-state solution is the way forward, saying “this would usher in a new era of cooperation."

Gulf Arab states have been building ties with Israel, in part over shared concerns about rival Iran.

The Sunni-ruled government of Bahrain accuses Iran of arming militants from among majority Shiites in the country and of plotting attacks on the island-nation.

President Abed Rabbo Mansour Hadi made the plea in a prerecorded speech to the U.N. General Assembly’s virtual summit. He spoke from Saudi Arabia, where he's been living during a more than five-year war that's ravaged the Arab world’s poorest nation on the western tip of the Arabian Peninsula.

Hadi represents the internationally recognized government of Yemen that was pushed out of the capital in late 2014 by the Houthis. A Saudi-led coalition backing Hadi has been at war in Yemen ever since, sparking the world’s worst humanitarian disaster. Millions have been displaced, pushed into poverty and live on the brink of famine.

Hadi blamed Iran for meddling in his nation and said he's “trying to save our country and establish a just and lasting peace."

The Yemen Data Project says more than 17,500 civilians have been killed and injured since 2015.

Multiple attempts by the U.N. to broker a peace deal have failed.

African nations have come out swinging on the third day of the United Nations annual gathering of world leaders, calling for dramatic fiscal measures to help the continent’s economies survive the coronavirus pandemic.

They seek debt cancellation to free up more resources to tackle the virus and its effects, including the fight against other deadly diseases.

The president of Ivory Coast, one of the world’s fastest-growing economies before the pandemic, called for the extension of a debt moratorium and the issue of special drawing rights at the International Monetary Fund.

Alassane Ouattara called “Africa’s partners to take bolder measures.” He noted that the fight against COVID-19 and its economic effects has represented 5% of the country’s GDP.

African nations estimate they need $100 billion in support annually for the next three years, saying it’s a fraction of the trillions of dollars some richer countries are using to revive their economies.

The United Nations chief says the world failed to cooperate in tackling the COVID-19 pandemic, and if its response to the climate crisis is equally poor, “I fear the worst.”

Secretary-General Antonio Guterres told the U.N. Security Council that the “tiny microscopic virus is now the number one threat in our world.” He blamed a lack of global preparedness, cooperation, unity and solidarity for the international community's failure.

The council met Thursday on the sidelines of the General Assembly’s virtual gathering of world leaders.

Guterres pointed to the nearly 1 million deaths and 30 million infections worldwide and warned that the coronavirus remains out of control.

He called for global cooperation, saying the idea of global governance must be broadened “to take in businesses, civil society, cities and regions, academia and young people.”

Guterres said COVID-19 is a warning “that must spur us to action.”