The Latest: Coronavirus vaccine provided to US Supreme Court 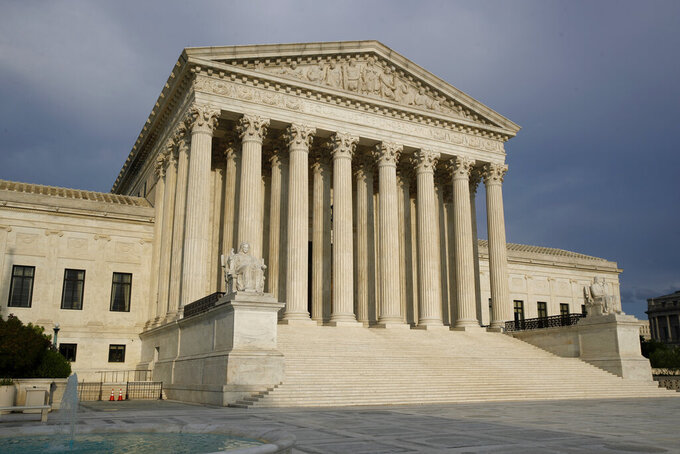 FILE - In this May 3, 2020, file photo, the setting sun shines on the Supreme Court building in Washington. As coronavirus cases surge again nationwide, the Supreme Court late Wednesday, Nov. 25, temporarily barred New York from enforcing certain attendance limits at houses of worship in areas designated as hard hit by the virus. The court’s action won’t have any immediate impact since the two groups that sued as a result of the restrictions, the Catholic church and Orthodox Jewish synagogues, are no longer subject to them. (AP Photo/Patrick Semansky, File)

WASHINGTON — The justices on the U.S. Supreme Court are being provided with doses of the coronavirus vaccine.

That is according to a letter by Capitol Physician Brian Monahan, which says the court, along with Congress and executive branch agencies are being given a limited supply of doses “for continuity of government operations.”

The doses are being provided under a directive by President Donald Trump that established continuity of government as a reason for vaccine prioritization. The Supreme Court and the other branches of government are supposed to be treated “in parallel.”

Health experts are convening to discuss the Moderna vaccine data. The panel of physicians and medical researchers is expected to endorse it, followed by the FDA's OK soon after. A Pfizer vaccine got the go-ahead last week.

French president Macron tests positive for the coronavirus and is self-isolating. Macron recently met with numerous European leaders. The French and Spanish prime ministers are among many top officials in quarantine.

SEOUL, South Korea — South Korea has reported 1,062 new cases of coronavirus infections, its third straight day above 1,000 as the virus continues to slam the greater capital area where hospital beds are in short supply.

The cases reported Friday brought the national caseload to 47,515. There have been 645 deaths from COVID-19.

More than 760 of the new cases were in the densely populated Seoul metropolitan area, where health workers are struggling to stem transmissions.

Health officials have raised alarm about a looming shortage in hospital beds and intensive care units.

The viral resurgence has put pressure on the government to raise social distancing restrictions to maximum levels, something policymakers have resisted for weeks out of economic concerns.

The tally for Thursday eclipsed the previous 24-hour high of 21 deaths reported Nov. 24.

A total of 1,126 people have died in Utah from COVID-19 since the pandemic began.

State health officials say most of the new deaths were people 65 and over.

SYDNEY — Australian officials say the number of coronavirus infections from a cluster in Sydney’s northern coastal suburbs is continuing to grow.

The chief health officer for New South Wales state says testing on Thursday and early Friday found 28 new infections. Several had been at the Avalon Beach R.S.L. Club on Dec. 11 and a nearby lawn bowling club called Avalon Bowlo on Dec. 13.

More than 250,0000 residents of Sydney’s Northern Beaches Local Government Area were advised Thursday to work from home and remain at home as much as possible for three days. Others were advised to avoid traveling to the area.

However, the court also says Brazilians may not be vaccinated against their will. A court statement says Thursday’s ruling does pave the way for state and municipal governments to approve laws imposing fines or restrictive measures for anyone refusing to take a vaccine.

President Jair Bolsonaro has repeatedly said he will not take any vaccine and opposes mandatory immunization. He has also sown skepticism about potential side effects.

Opinion polls have indicated a growing resistance to vaccination, with about one-fifth of Brazilians surveyed by pollster Datafolha this month saying they don’t intend to get a shot. That is more than double the percentage four months earlier.

Brazil’s health regulator Anvisa has yet to approve any shot for mass immunization.

ATLANTA — Georgia Gov. Brian Kemp says the state will keep paying for extra nurses to assist hospitals, nursing homes and other health care facilities that have struggled to find staff and keep up with demand because of the coronavirus pandemic.

Kemp said Thursday Georgia will commit as much as $70 million to pay staffing agencies that are providing extra nurses through March. Georgia is on track to spend $250 million on the program this year.

The state has spent federal coronavirus aid on the program so far. Kemp hopes the federal government will free up more money to cover the costs, but spokesperson Cody Hall says Georgia will use state money if no federal money is available.

Hospitals and nursing homes have struggled with staffing as some employees are infected or quarantined.

Kentucky’s previous one-day record of 38 deaths was Dec. 2. The state has reported more than 3,300 confirmed or probable coronavirus deaths since the pandemic began.

The state public health commissioner is urging people to limit social gatherings during the holiday season in order to slow the spread of the virus. Residents are recommended to limit travel and limit the size of gatherings to two households and no more than eight people.

SAN DIEGO — A California judge says all restaurants in San Diego County can resume on-site dining with safety protocols, marking a setback to the governor’s stay-at-home order to slow the spread of the coronavirus.

San Diego Superior Court Judge Joel Wohlfeil made that clear Thursday in explaining his ruling a day earlier protecting two strip clubs from pandemic restrictions. He says that decision also covers the thousands of restaurants in the county of 3 million people.

County officials suspended enforcement of restrictions barring indoor and outdoor dining and live entertainment after the Wednesday ruling. But they requested Thursday’s hearing to get clarification from the judge about the scope of his decision.

WASHINGTON — Senate Majority Leader Mitch McConnell says he is going to get vaccinated against the coronavirus in the next few days.

The Kentucky Republican says the Capitol physician informed him that he is eligible to be among the first vaccinated “because of government continuity requirements.”

Unlike Speaker of the House Nancy Pelosi, McConnell is not in the line of succession for the presidency but as majority leader he is in charge of running the Senate.

McConnell says that as a polio survivor, he is especially aware of the “extraordinary promise of hope” that vaccines offer. He says he will continue to wear a mask and follow other health guidelines after being vaccinated.

BATON ROUGE, La. — The number of people in Louisiana hospitalized with COVID-19 has reached heights exceeding the state’s summer surge of the disease that can be caused by the coronavirus.

Dr. Catherine O’Neal is an infectious disease expert at Our Lady of the Lake Regional Medical Center. She says the Baton Rouge hospital admitted the most COVID-19 patients over the previous 24 hours than it has seen in a similar period since July.

O’Neal says: “Our hospital’s full. Every hospital in the state is full.”

LITTLE ROCK, Ark. — Arkansas’ coronavirus infections in the latest 24 hours rose above 3,000 for the first time in the pandemic.

Gov. Asa Hutchinson says the new high in cases is “a milestone we did not want to reach.”

Space in Arkansas’ intensive care units continued to shrink, with only 46 of its 1,154 ICU beds unused. About a quarter of the state’s 9,037 hospital beds were available.

ATHENS, Greece — NBA basketball star Giannis Antetokounmpo has appeared in a commercial in his native Greece, released ahead of Christmas to urge people to observe public safety measures during the pandemic.

“All victories start with defense,” the Milwaukee Bucks star said, speaking in Greek in the minute-long spot edited in black and white.

The ad features photographs of Antetokounmpo growing up in an Athens neighborhood, the son of struggling Nigerian immigrants, and scenes from his participation in the games with the Greek national basketball team.

“I have learned in life to look my opponent in the eye. But for the first time in my life, I’m playing against an invisible opponent,” the player said in the commercial. “I can’t see it but it’s there. That’s how I see the virus, Covid. Now we have to play defense.”

The ad was launched in a tweet from Greek Prime Minister Kyriakos Mitsotakis.

Greece launched a nationwide lockdown on Nov. 7 that will remain in effect for two months. Public health officials have issued daily appeals for people to remain cautious over the Christmas holidays, as hospitals in high-infection areas remain close to capacity.

HARTFORD, Conn. -- Labor unions are accusing Connecticut court officials of refusing to address concerns about the coronavirus and putting workers at risk of contracting COVID-19. A coalition of unions representing nearly 4,000 court system employees said Thursday that they’re calling for an immediate meeting with Chief Justice Richard Robinson and Judge Patrick Carroll III, the chief court administrator. Union officials say the Judicial Branch has not curtailed work activity in its buildings, despite rising virus cases. Carroll says judicial officials have been meeting regularly with union officials to address their concerns, and the Judicial Branch has been following coronavirus guidance from state health officials to keep people safe.

AUSTIN, Texas — More than 1 million Texans are expected to be vaccinated for COVID-19 by the end of the month as part of the largest vaccination campaign in U.S. history, Gov. Greg Abbott said Thursday.

Texas had received about 95,000 doses of Pfizer’s vaccine through Wednesday with another 129,000 doses to be delivered Thursday, Abbott said. That number is expected to grow if the Food and Drug Administration quickly approves a second vaccine from the drugmaker Moderna, Abbott said.

At a press conference Thursday, Abbott said he had not yet been vaccinated but planned to do so after front-line health care workers are inoculated.

The vaccine is arriving as cases of COVID-19 and virus-related hospitalizations are on the rise. Texas reported 9,528 people hospitalized with COVID-19 and 252 more fatalities from the disease caused by the virus Wednesday. Intensive care units in some regions were at or near full capacity, according to the Texas Department of State Health Services.

There were 728.5 new cases per 100,000 people in Texas over the past two weeks, according to researchers at Johns Hopkins University. One in every 268 people in Texas tested positive for the virus in the past week.

Many of the state’s hospitals are now running out of capacity to treat the severest cases.

California’s pandemic death toll now stands at 21,860. The state has also seen the most cases in the nation with more than 1.7 million confirmed.

In Los Angeles County, the nation’s most populous, authorities reported Wednesday that two people are dying every hour as hospitals struggle to keep up with the surge of coronavirus patients.

BIRMINGHAM, Ala. — Rep. Mike Rogers said Thursday he had tested positive for COVID-19 and was experiencing mild symptoms, becoming the second Republican member of Alabama’s congressional delegation to announce he had contracted the illness caused by the new coronavirus.

Rogers, 62, said he was self-isolating after consulting with the House physician.

“I am experiencing mild symptoms but otherwise I am in good spirits and looking forward to getting back to work soon,” he said in a tweet.

Rep. Robert Aderholt of Haleyville announced last month he had tested positive for COVID-19 but wasn’t experiencing symptoms. Aderholt spoke Monday at the Alabama Capitol during a ceremony that coincided with the meeting of the Electoral College