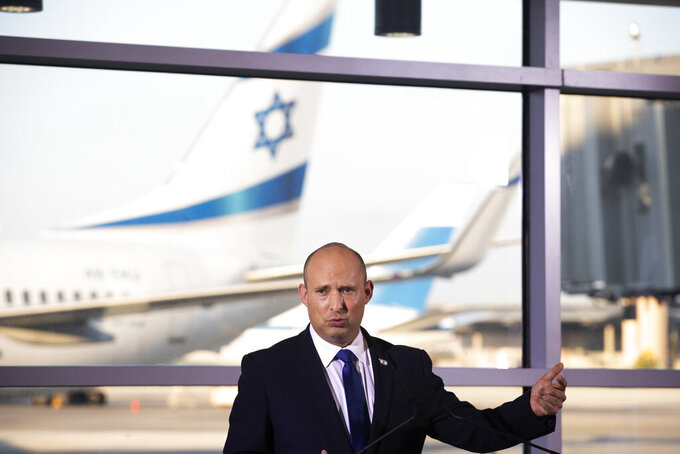 SYDNEY, Australia — A state government minister has been infected with COVID-19 and another minister is in isolation as a cluster in the Australian city of Sydney worsens.

New South Wales Agriculture Minister Adam Marshall said he was told on Thursday that he had tested positive after dining with three government colleagues on Monday at a Sydney restaurant after an infected diner.

All four lawmakers had been attending Parliament as recently as Tuesday.

Health Minister Brad Hazard said he was self-isolating after being exposed to a potential case at Parliament House.

Hazzard said while standing next to Premier Gladys Berejiklian at daily pandemic media briefings, that he thought she was “fairly safe.”

Pandemic restrictions tightened in Sydney on Thursday as a cluster of the Delta variant increased and states banned travel from either parts of Sydney or from anywhere in New South Wales.

The cluster began last week when a Sydney airport limousine driver tested positive. He was not vaccinated and is suspected to have been infected while transporting a foreign air crew. The cluster had grown to 31 cases by Wednesday.

— Italy is banking on a huge windfall of EU pandemic recovery funds to revamp its lagging economy. The future of the eurozone may depend on how well it does.

— Due to the pandemic, Tokyo is shaping up to be the ‘no-fun’ Olympics

JERUSALEM — Israel’s government has postponed the planned reopening of the country to vaccinated tourists over concerns about the spread of the infectious delta variant of the coronavirus.

Israel was set to reopen its borders to vaccinated visitors on July 1, after having largely closed the country during the pandemic. It had already started allowing groups of vaccinated tourists to enter in May. All visitors will need to be tested before boarding flights to Israel and show proof of vaccination.

But after a rise in infections in the past week, the government said Wednesday that it would be pushing that date until Aug. 1. Israel’s Health Ministry recorded 110 new cases of coronavirus in the past day.

Israel has suffered a major economic blow due to the coronavirus pandemic, but even as the country has gradually recovered after a speedy vaccination campaign, the tourism industry has remained blighted.

“Fighting COVID & vaccinating New Yorkers are still top priorities, but the emergency chapter of this fight is over,” Cuomo tweeted.

It’s the governor’s latest announcement about lifting COVID-19 restrictions at a time when rates of new positives are dipping to record lows as more New Yorkers get vaccinated. And it follows months of pushback from Republicans and business groups who have called for Cuomo’s executive power to be reined in.

BERLIN — Germany’s disease control center says the delta variant accounted for more than 15% of coronavirus infections in the country by mid-June, with its share roughly doubling in a week.

The Robert Koch Institute said in a weekly report Wednesday that the more contagious delta variant’s share in sequenced samples rose to 15.1% in the week ending June 13. That compares with 7.9% a week earlier.

The alpha variant, first detected in Britain, remained dominant in Germany, though its share declined to 74.1% from 83.5%.

Overall cases in Germany have declined to their lowest level in months. On Wednesday, the disease control center said that 1,016 new cases were reported over the previous day — a rate of 7.2 new cases per 100,000 residents over seven days.

Authorities have relaxed many restrictions but are pointing to surges in Britain, Portugal and Russia driven by the delta variant, first detected in India, as illustrating the need to remain vigilant.

MADRID — Spain is scrapping its requirement to wear face masks outdoors, as long as people can remain at least 1.5 meters (5 feet) apart, from next Saturday.

Health Minister Carolina Darias said masks will still be needed at large gatherings, such as concerts, when people are on their feet instead of sitting on distanced chairs.

She said Wednesday that face coverings have been “tremendously efficient and useful” in helping curb the spread of COVID-19.

She noted that 32% of Spaniards have had two vaccine doses and 50% have had a single doses so far, allowing a relaxation of mask rules.

BERLIN — A spokesman for Angela Merkel says the German Chancellor received two different vaccines in a conscious effort to encourage people not to be afraid if they are advised to get a mix of shots.

Merkel’s office confirmed Tuesday that the 66-year-old received a first shot of the AstraZeneca vaccine on April 16. For the second shot, she received the Moderna vaccine.

Her spokesman, Steffen Seibert, said Merkel intentionally opted for the initial AstraZeneca shot at a time when there were concerns about possible serious side effects.

“And so she can now perhaps take away the fears of people...who were or are worried about this so-called cross-vaccination,” he said.

BOISE, Idaho — Just over half of Idaho adults have now received at least one dose of a coronavirus vaccine — about two months after the 50% mark was reached nationwide.

Idaho Public Health Administrator Elke Shaw-Tulloch said during a press conference Tuesday that the state is unlikely to meet the national goal of at least 70% of adults with at least one vaccine dose by July 4.

Still, she said the state continues to make slow gains in vaccination rates. The U.S. Centers for Disease Control and Prevention says Idaho has the eighth lowest adult partial COVID-19 vaccination rate in the U.S.

ANKARA, Turkey — Turkey’s health minister says anyone 18 years old and older will be eligible to receive COVID-19 vaccines as of Friday, as the country ramps up its vaccination campaign.

Speaking after a meeting of the country’s scientific advisory council on Wednesday, Fahrettin Koca said the government aims to administer at least one dose to around 70% of the 55 million people that are eligible to be vaccinated, by mid-July.

Meanwhile, Koca said 40,800 people would be involved in the late-stage trial of Turkey’s first local COVID-19 jab, which had been named TURCOVAC. The vaccine that uses the “inactivated virus” technology, was developed by Turkey’s Erciyes University.

Some volunteers would be administered the vaccine developed by China’s Sinovac pharmaceutical instead of a placebo, allowing researchers to compare the two inactivated vaccines’ safety and efficacy, the minister said. Volunteers in Hungary, Azerbaijan and Kyrgyzstan would also be involved in the trials.

MOSCOW — Buryatia, a republic in Siberia, became the first Russian region on Wednesday to announce a lockdown because of a surge in coronavirus infections.

The lockdown will take affect on Sunday and last for two weeks, during which only essential services such as grocery shops, pharmacies, utility companies, public transport and media organizations will be allowed to operate.

Coronavirus infections in Russia have surged in recent weeks, with the daily tally of new cases growing from approximately 9,000 in early June to over 17,000 last Friday.

Buryatia is the only Russian region so far that imposed several lockdowns since the beginning of the pandemic. Last November, the region’s governor also closed all non-essential businesses for two weeks in an effort to cope with a resurgence of the outbreak.

Russia had only one, six-week nationwide lockdown last spring, and most coronavirus restrictions in the country were lifted over the summer. Kremlin spokesman Dmitry Peskov told reporters Wednesday no plans to reimpose another nationwide lockdown were being discussed by authorities.

LISBON, Portugal — The Lisbon region’s recent surge in COVID-19 cases is powering ahead, with new infections pushing Portugal’s number of daily cases to a four-month high.

Portugal on Wednesday reported almost 1,500 new cases, with two thirds of them in the region of the capital where some 2.8 million people live.

The pressure on hospitals remains manageable, with just 437 virus patients admitted and 100 in intensive care.

The Portuguese government has already banned travel into and out of the Lisbon region at weekends. Experts blame the Delta variant for the virus spread there.

It is widely expected to announce new restrictions for Lisbon after a Cabinet meeting on Thursday.

GENEVA — Swiss authorities are vastly easing measures aimed to combat COVID-19 and relaxing some key requirements facing incoming travelers, as case counts and deaths from the pandemic have plunged in Switzerland in recent weeks.

Among the new steps effective Saturday, the Federal Council said work-from-home rules and the requirement to wear masks outdoors will be lifted. Restaurants will also no longer have to limit the number of patrons that can dine together.

The Swiss government said people from the European Schengen area — a vast zone that allows visa-free travel between countries — will no longer be required to quarantine upon entry to Switzerland.

Rules limiting entries of people from abroad will focus on countries with worrying levels of coronavirus variants in circulation.

The council — Switzerland’s executive branch — is also extending the estimated duration of vaccine effectiveness for mRNA vaccines like those from Pfizer-BioNTech and Moderna to 12 months, from six months.

Swiss health authorities said Wednesday that 154 new cases and 2 new deaths were recorded from Tuesday to Wednesday in the country of about 8.5 million. Overall, Switzerland has tallied over 700,000 cases and 10,000 deaths linked to COVID-19.

PARIS — France is adding Russia to its “red list” of countries from which travels are banned unless imperious motives because they are struggling with virus surges and worrisome variants.

French government spokesperson Gabriel Attal said Wednesday that Russia, Namibia and Seychelles are being added to the list of now 21 countries.

The “red list” notably includes India, South Africa and Brazil and implies that vaccinated travelers arriving in France must justify their trip, show a negative test and self-isolate for a week. Those not vaccinated must go on a quarantine for 10 days, risking a 1000-euro fine, equivalent to $1,194.

The delta variant is estimated to represent 9 to 10% overall in France, he said. But authorities are closely monitoring the situation in a region of southwestern France, the Landes, where 70% of confirmed infections are due to the delta variant, he added.

The epidemic situation in France has rapidly improved in recent weeks, with about 2,300 new daily infections reported each day, down from 35,000 in the March-April peak.

BRUSSELS — Teenagers in Belgium aged from 12 to 15 with underlying conditions will be able to get vaccinated with the Pfizer-BioNTech vaccine.

The move was adopted Wednesday following a meeting of the country’s health ministers.

They said COVID-19 shots will be offered to youngsters affected by pathologies such as leukemia, Down syndrome or liver and kidney diseases because the risk they face to develop a severe form of coronavirus requiring a stay in hospital higher than the general population.

A decision has yet been taken on the vaccination of others in that age group.

THE HAGUE, Netherlands — A telephone line set up to allow people in the Netherlands to book a Johnson & Johnson COVID-19 vaccination has been overwhelmed with callers.

Health Minister Hugo de Jonge tweeted Wednesday that more than 130,000 people had attempted to call the line a total of more than 2 million times on the first morning that the government allowed anybody over the age of 18 to make an appointment for a J&J vaccination.

The J&J single-dose shot has largely been removed from the Dutch COVID-19 vaccination program because of the tiny risk of an extremely rare blood clotting disorder.

However, the government has about 200,000 J&J shots available over the next two weeks and is making them available to the public on a first-come-first-served basis.