The Latest: Disney plans to restart fireworks shows at parks 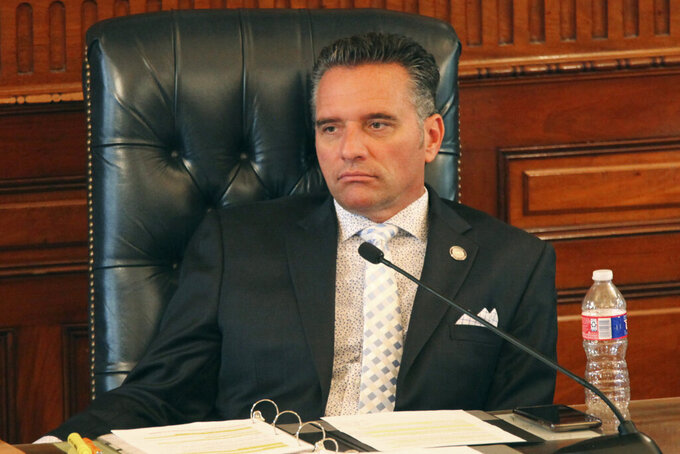 Senate President Ty Masterson, R-Andover, presides over a session of the Senate at the Statehouse on May 5, 2021, in Topeka, Kan. Top Republicans on Tuesday, June 15 ended Kansas' state of emergency for the coronavirus pandemic, refusing to consider Democratic Gov. Laura Kelly's arguments that it is still necessary for vaccinations and some testing for COVID-19. Masterson announced the cancellation of a meeting of eight legislative leaders set for Tuesday afternoon. (AP Photo/John Hanna)

ORLANDO, Fla. — Disney plans to restart fireworks shows at its theme parks in Florida and California in the latest move by the company to ease up on pandemic restrictions implemented last year.

The company said Tuesday that firework shows would resume at the beginning of July at Walt Disney World in Florida and on the Fourth of July at Disneyland in California. The fireworks shows had been put on hold in order to discourage people from gathering together after the parks reopened following virus-related closures last year.

The decision was the latest move by Disney to lift restrictions implemented last summer to stop the spread of the new coronavirus.

Starting Tuesday, face masks were made optional for visitors to Disney World in Florida, provided they are vaccinated, though Disney workers weren’t requiring proof of vaccination.

— More evidence suggests COVID-19 was in US by Christmas 2019

LOS ANGELES — Gov. Gavin Newsom has doled out $1.5 million each to 10 vaccinated winners at Universal Studios to mark the end of the state’s coronavirus restrictions.

The $15 million awarded Tuesday was the final part of Newsom’s $116.5 million so-called “Vax for the Win” program. The effort encourages residents to get vaccinated and speed up California’s recovery amid the COVID-19 pandemic that has killed 3.8 million globally and 600,000 nationwide.

Tuesday was hailed as California’s reopening and meant the end of many coronavirus-related restrictions, including masks, social distancing and capacity limits in most settings.

More than 3.6 million people tested positive for the virus in California and over 62,000 died.

ALBUQUERQUE, N.M. — Vaccine supplies have eclipsed demand in New Mexico even as the state makes a hard push toward meeting a key vaccination goal Thursday.

Health officials have confirmed to The Associated Press that New Mexico’s inventory includes nearly 493,000 doses that are being stored in freezers around the state. Expiration dates range from this week through September. The state also has donated 372,600 doses of its undelivered allocation back to the federal government.

Health Department spokesman David Morgan has said that New Mexico is adapting to shrinking demand for the vaccine in several ways. That includes ordering only a minimal number of doses as requested by providers.

New Mexico is just shy of meeting its goal of having 60% of residents 16 and older fully vaccinated. Democratic Gov. Michelle Lujan Grisham wants to hit that mark this week so she can follow through with plans to fully reopen the state by July 1.

The latest data from the state puts the vaccination rate at 58.5%.

The state is offering cash incentives for people who get either their second shot or the one-time Johnson & Johnson shot by Thursday. Those who are vaccinated also can participate in a sweepstakes that includes a grand prize of $5 million.

NEW YORK — Gov. Andrew Cuomo says 70% of adults in New York have received at least one dose of a coronavirus vaccine.

He says the state will celebrate by easing many of its remaining social distancing rules and by shooting off fireworks to honor essential workers. Effective immediately, the state is lifting rules that had limited the size of gatherings. Businesses will no longer have to follow social distancing rules, or limit how many people they can allow inside based on keeping people 6 feet apart.

In the past week, New York has been averaging around 450 new coronavirus cases a day, the lowest level since the start of the pandemic.

New York has registered 2.1 million confirmed cases and 53,558 confirmed deaths from the coronavirus. It’s considered an undercount because many had the virus before testing was widely available.

BRUSSELS — The European Commission proposed the 27-nation bloc appoint a European chief epidemiologist by the end of the year to better respond to future health crises.

The EU’s executive arm presented a list of 10 lessons learned from the coronavirus pandemic, focusing on improvements for next time.

The Commission also proposed creating a global surveillance system to ensure faster detection, allowing the activation of an “EU pandemic state of emergency.” The proposals will be discussed by EU leaders during a summit next week in Brussels.

Meanwhile, the European Commission says it has raised $24.2 billion through a 10-year bond to finance the 27-nation bloc’s recovery from the coronavirus crisis.

EU Commission president Ursula von der Leyen says the inaugural transaction of the NextGeneration EU program is the largest institutional bond issuance in Europe. The money will help finance the national recovery plans devised by member states to get their economies back on track.

The governor made the announcement at a news conference one year, three months and 10 days after Maryland confirmed its first cases of the coronavirus.

“Masks or face coverings will not be required in any settings anywhere, including schools, camps and childcare facilities,” Hogan said. “Businesses and other workplaces are obviously still able to set their own policies, and we’ll support their ability to do so. But there will not be any legal mandate from the state for wearing masks at any location anywhere in the state.”

Hogan, a Republican, also says July 1 will be the start of a 45-day grace period through Aug. 15, “where certain regulations will continue to be relaxed to help people complete the transition out of the pandemic.”

The governor says Maryland is granting an extension of the state’s moratorium on evictions related to COVID-19 through Aug. 15. Health officials will have a 45-day period to transition from emergency operations.

NEW YORK — The U.S. death toll from COVID-19 has topped 600,000 as the vaccination drive has decreased daily cases and deaths.

That’s according to a tally by Johns Hopkins University. The number of lives lost is greater than the population of Baltimore or Milwaukee. It is about equal to the number of Americans who died of cancer in 2019.

With the advent of the vaccines, COVID-19 deaths per day in the U.S. have plummeted to an average of 340 from a high of more than 3,400 in mid-January. Cases are running at 14,000 a day on average, down from a quarter-million per day during the winter.

Worldwide, the COVID-19 confirmed death toll stands at 3.8 million. The actual totals in the U.S. and around the globe are thought to be significantly higher, with many cases overlooked or possibly concealed by some countries.

SAN FRANCISCO — California was the first state in America to put in place a coronavirus lockdown, but it is turning a page on the pandemic.

At midnight, California lifted most of its COVID-19 restrictions and ushered what’s being called a “Grand Reopening.” There will be no more state rules on social distancing and no more limits on capacity at restaurants, bars, supermarkets, gyms and stadiums. Masks have been one of the most symbolic and fraught symbols of the pandemic. Now they will no longer be mandated by the state in many situations.

More people tested positive for the virus in California (3.8 million and counting) and more people died (63,000 plus) than anywhere else in the country, although the nation’s most populous state had a lower per capita death rate than most others.

California now has one of the lowest rates of infection below 1%. That dramatic drop combined with an increasing number of vaccinated residents — over 70% of adults have had at least one dose — led Newsom to announce in April that most COVID-19 restrictions would be lifted June 15.

People who got the expired doses of the Pfizer vaccine at the former NFL Experience building between June 5 and June 10 were being urged by city health officials to get another dose.

ATC Vaccination Services, the company that administered the shots, apologized for the error. Officials said there is no danger from getting the expired doses or from getting a replacement shot.

SAO PAULO — Brazil’s government says it has documented 41 cases of COVID-19 related to the Copa America.

It says the cases include 31 football players or staffers with teams and 10 workers who were hired for the event. Brazil’s health ministry also says all workers who tested positive are in Brasilia. That’s where Brazil kicked off the tournament on Sunday with a 3-0 win over Venezuela.

Brazil stepped in late as an emergency host for the tournament despite the country having the second-highest number of recorded deaths from the coronavirus in the world. Brazil’s health ministry says 2,927 COVID-19 tests related to Copa America have been conducted so far.

NEW YORK — A new analysis of blood samples from 24,000 Americans taken in early 2020 is the latest and largest study to suggest the coronavirus arrived in the U.S. in December 2019.

That’s weeks before cases were first recognized by health officials. The analysis is not definitive, and some experts remain skeptical. But federal health officials are increasingly accepting a timeline in which small numbers of COVID-19 infections may have occurred in the U.S. before the world became aware of a dangerous new virus erupting in China.

The study was published Tuesday online by the journal Clinical Infectious Diseases.

“The studies are pretty consistent,” said Natalie Thornburg of the Centers for Disease Control and Prevention. “There was probably very rare and sporadic cases here earlier than we were aware of. But it was not widespread and didn’t become widespread until late February.”

A CDC-led study published in December 2020 analyzed 7,000 samples from American Red Cross blood donations and suggested the virus infected some Americans as early as the middle of December 2019.

The latest study is by a team that includes researchers at the National Institutes of Health. They analyzed blood samples from more than 24,000 people across the country, collected in the first three months of 2020, as part of a long-term study.

The coronavirus emerged in late 2019 in Wuhan, China. Officially, the first U.S. infection identified was a traveler — a Washington state man who returned from Wuhan on Jan. 15 and sought medical help on Jan. 19.

HELSINKI — Estonia will ease COVID-19 restrictions on June 28 by raising the limit on participants in indoor and outdoor events.

“Easing of restrictions doesn’t however mean that there wouldn’t be a need for caution. The virus is still spreading from person to person, and it has not disappeared from among us,” said Prime Minister Kaja Kallas.

She added the Indian strain of the coronavirus has started to spread in Estonia, a nation of 1.3 million.

Estonia has recorded 130,599 confirmed infections and 1,266 confirmed deaths since the start of the pandemic.

TOPEKA, Kan. — Top Republicans are ending the Kansas state of emergency for the coronavirus pandemic.

They refused Tuesday to consider Democratic Gov. Laura Kelly’s arguments for an extension. Kelly chief of staff Will Lawrence says the Kansas National Guard won’t be able to help distribute vaccines and the state will lose an extra $14.5 million a month in federal food aid for 63,000 households.

Kansas Senate President Ty Masterson says it is time for Kansas to return to normal.

The U.S. shipment will be used to vaccinate anyone over 18 in four cities along the U.S. border: Tijuana, Mexicali, Ciudad Juárez and Reynosa. Mexico has said the goal is to boost vaccination rates there to levels similar to the U.S. cities they adjoin.

Foreign Relations Secretary Marcelo Ebrard, who was meeting with U.S. Homeland Security Secretary Alejandro Mayorkas in Mexico City, says after the vaccinations “there will be no public health arguments for keeping the border closed.”

The U.S. and Mexico have restricted border crossings to essential travel since early in the pandemic.

Assistant Health Secretary Hugo López-Gatell says the expanded vaccinations in border cities could begin Wednesday. Mexico is seeking to acquire more of the vaccine to inoculate all border residents.