The Latest: Djokovic, if fit, and Serena highlight schedule 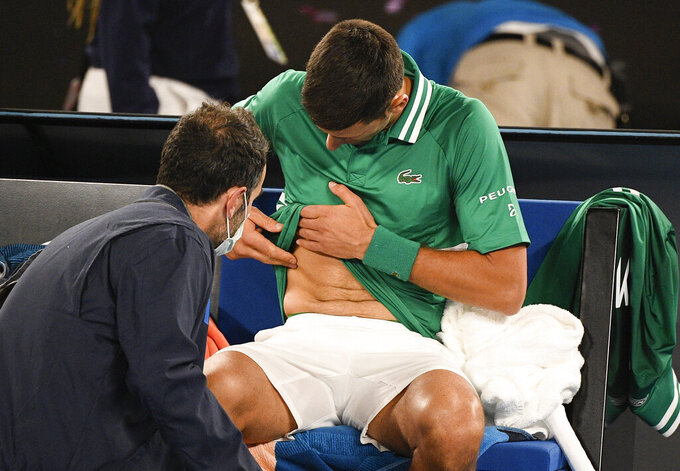 Novak Djokovic — if he is healthy enough to play — and Serena Williams headline Day 7 as the fourth round of the Australian Open gets started.

There will not be any spectators in the stands because of a five-day lockdown imposed by the government in reaction to new COVID-19 cases in the area.

The first quarterfinal berths will be at stake with four women's matches and four men's matches on the singles schedule Sunday (Saturday EST).

Williams continues her quest for a record-tying 24th Grand Slam singles title when she plays No. 7 seed Aryna Sabalenka in the second match at Rod Laver Arena.

Their match is to be followed by eight-time Australian Open champion Djokovic against 2016 Wimbledon finalist Milos Raonic — assuming Djokovic decides he can play.

The No. 1-ranked Serb hurt a stomach muscle when he fell during his fourth-round victory over Taylor Fritz and skipped practice on Saturday.

Other men in action include reigning U.S. Open champion Dominic Thiem and the man he beat in that final, Alexander Zverev.