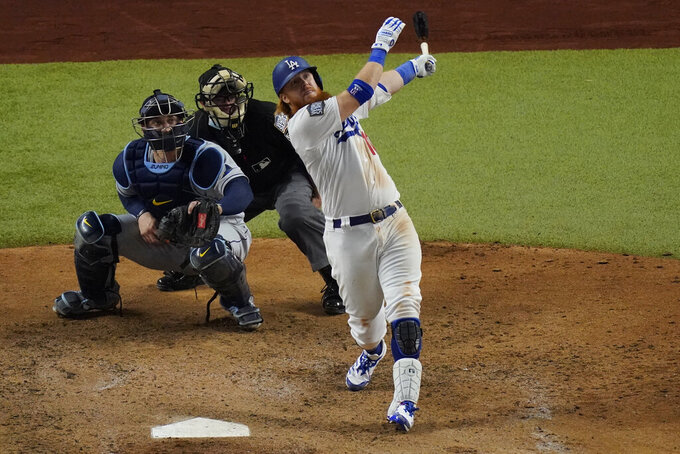 ARLINGTON, Texas (AP) — The Latest on Game 6 of the World Series between the Los Angeles Dodgers and Tampa Bay Rays (all times local):

Justin Turner was removed from the Dodgers’ World Series-clinching victory after testing positive for the coronavirus.

The red-headed third baseman was replaced on defense in the eighth inning and was not on the field as Los Angeles celebrated its first championship since 1988. Dodgers players and coaches wore face masks during the celebration. There was no dogpile on the infield that’s typical of such celebrations, although there were still hugs and high fives.

“We learned during the game Justin tested positive and he was immediately isolated to prevent spread,” Commissioner Rob Manfred said after presenting Los Angeles with the championship trophy.

Mookie Betts streaked home with a go-ahead run and later homered for good measure as the Los Angeles Dodgers won their first World Series championship since 1988, taking advantage of a hotly debated Tampa Bay move to beat the Rays 3-1 in Game 6.

The Dodgers posted the best record in the majors during this pandemic-shortened season, then rallied in the final game to claim a most elusive crown.

Tampa Bay starter Blake Snell struck out nine and seemed to be in complete control with a 1-0 lead when manager Kevin Cash pulled him with one out and a runner on first in the sixth inning. The Dodgers pounced quickly, and Betts soon dashed home from third base on Corey Seager’s infield grounder for a 2-1 edge.

Betts added a solo home run in the eighth.

Manager Dave Roberts and the Dodgers lost the World Series in 2017 and ’18 before winning this title at a neutral site, Globe Life Field in Arlington, Texas.

Mookie Betts hit a solo homer to provide a valuable insurance run for Los Angeles, and the Dodgers had a 3-1 lead against the Tampa Bay Rays heading into the ninth inning of Game 6 of the World Series.

The Dodgers are going for their first championship since 1988 and No. 7 overall.

After Julio Urías retired Tampa Bay in order in the top half of the eighth, Betts led off the bottom half with a drive to center for his second homer of the Series.

With postseason star Julio Urías on the mound, the Los Angeles Dodgers are clinging to a 2-1 lead over the Tampa Bay Rays heading into the eighth inning.

Brusdar Graterol got the first two outs of the seventh for the Dodgers before giving up a single to Mike Zunino, his first hit in 16 at-bats during this Fall Classic. Urías, the seventh Dodgers pitcher, entered and threw a called third strike past pinch-hitter Yandy Díaz.

Rays reliever Pete Fairbanks worked around Will Smith’s leadoff double in the bottom of the seventh to keep it a one-run game. Smith’s drive went off the wall in the left-field corner by the 329-foot sign.

The Los Angeles Dodgers pushed across two runs after Tampa Bay manager Kevin Cash pulled a dominant Blake Snell in the sixth inning, taking a 2-1 lead over the Rays in Game 6 of the World Series.

Cash came out to get Snell after No. 9 hitter Austin Barnes singled with one out for the Dodgers’ second hit. Snell had thrown just 73 pitches, and the 2018 AL Cy Young Award winner looked as if he disagreed with the quick hook.

The pitching change likely will be questioned for years to come should the Rays lose, ending their title hopes. Betts had a .531 OPS against lefties this season, compared to 1.061 versus right-handers.

Blake Snell is sailing along and dominating the Los Angeles Dodgers as the Tampa Bay Rays hold a 1-0 lead through five innings on Randy Arozarena’s homer in the first.

Snell, the 2018 AL Cy Young Award winner, has struck out nine and set down nine straight batters. The only baserunner he’s allowed came on Chris Taylor’s leadoff single in the third.

The left-hander has thrown 69 pitches, 45 for strikes. Snell hasn’t pitched six innings in a game since July 2019.

Snell joined Hall of Famer Sandy Koufax as the only pitchers to pile up nine strikeouts through the first four innings of a World Series game. Koufax did it for the Dodgers in the 1963 opener against the New York Yankees.

The only inning without a strikeout for Snell was the fifth, when he retired Will Smith on a fly to right, Cody Bellinger on a grounder to first and Taylor on a check-swing bouncer back to the mound.

Los Angeles has used five pitchers already, after rookie starter Tony Gonsolin was pulled in the second. Dylan Floro, Alex Wood and Pedro Báez had combined for perfect relief until Arozarena singled off Báez with two outs in the fifth, making the rookie slugger 8 for 21 (.381) with three homers in the Series.

Left-hander Víctor González entered and retired Austin Meadows on a grounder with his first pitch.

Rays catcher Mike Zunino struck out against Báez in the fifth and is 0 for 15 in the Series.

Snell and the Rays are trying to force a deciding Game 7. A win by the Dodgers would give them their first World Series championship in 32 years.

Rays starter Blake Snell is cruising through the Dodgers lineup for a second time, helping Tampa Bay maintain a 1-0 lead through four innings.

Snell overwhelmed the Dodgers’ 2-3-4 hitters in the fourth, striking out Corey Seager, Justin Turner and Max Muncy. Snell has nine strikeouts and only allowed one hit on 55 pitches. The left-hander hasn’t completed five innings since Game 1 of the AL Championship Series but seems primed to go deep in this one.

The 2018 AL Cy Young Award winner isn’t always so reliable in the middle innings. Snell limited batters to a .140 average the first time through the order in the regular season but allowed a .307 mark the second time around.

Dodgers starter-turned-reliever Alex Wood completed two perfect innings by striking out a pair in the fourth. The left-hander with a funky delivery has punched out five over four scoreless innings during the World Series.

Blake Snell is through three innings and his Rays still lead 1-0. Chris Taylor hit a leadoff single to become the Dodgers’ first runner, but was stranded at second base when Snell struck out Mookie Betts for the second time in the game.

Snell has fanned six in three innings. Tampa Bay keeps helping itself with its gloves, too.

Third baseman Joey Wendle and first baseman Ji-Man Choi teamed up for one out and catcher Mike Zunino neatly blocked a breaking ball by Snell to prevent Taylor from advancing.

Alex Wood became the Dodgers’ third pitcher of the game when he took over to begin the third, and he breezed through a perfect inning.

The Los Angeles starter was replaced by Dylan Floro after walking Ji-Man Choi to put two on with two outs and Tampa Bay leading 1-0. Manager Dave Roberts made the same move in the Rays’ 6-4 victory in Game 2, when Gonsolin and Snell both started.

Floro got an inning-ending strikeout of Randy Arozarena, the rookie who extended his record with his 10th homer of the postseason in the first.

The LA-tilted crowd among the pandemic-reduced total of about 11,000 is trying to get its club going with frequent chants of “Let’s go Dodgers” in the neutral-site Series in Texas. Snell is snuffing it out so far.

The Tampa Bay ace had another perfect inning, striking out two after fanning the side in the first. The left-hander didn’t allow a hit until the fifth inning in Game 2.

Randy Arozarena extended his postseason record with his 10th home run and Blake Snell struck out the side as the Tampa Bay Rays took a 1-0 lead after the first inning in Game 6 of the World Series, when a win by the Los Angeles Dodgers would give them their first title since 1988.

It was Arozarena’s third homer in the World Series, the first time a rookie has hit three in the Series since Charlie Keller did it for the New York Yankees in 1939. Arozarena became the first rookie to drive in a run in four consecutive Series games.

Arozarena went the opposite way in the top of the first, homering to right off rookie right-hander Tony Gonsolin with one out. Austin Meadows then hit a hard single and Brandon Lowe, who homered off Gonsolin in Game 2, walked before Manuel Margot had a flyout and Joey Wendle struck out.

Snell, the 2018 AL Cy Young Award winner, struck out Mookie Betts, Corey Seager and Justin Turner. The lefty struck out nine in 4 2/3 innings as the Rays won Game 2, when he didn’t allow a hit in that game until the fifth.

The Dodgers went in with hopes of getting five or six innings out of Gonsolin. He was in an opener role and pitched only 1 1/3 innings in Game 2.

Gonsolin needed 25 pitches to get through the first inning, and the Dodgers had Alex Wood warming up briefly in the bullpen only five batters into the game.

It was also the fifth consecutive game in this World Series when a run was scored in the top of the first inning. That had never happened before.

The Los Angeles Dodgers took a 3-2 World Series lead into Game 6 against the Tampa Bay Rays on Tuesday night, one win from their first title since 1988.

While Tony Gonsolin started Game 6 on Tuesday night, ace Walker Buehler was lined up to start a Game 7, with Clayton Kershaw available in the bullpen after throwing 85 pitches Sunday in Game 5 for his second win of the Series.

Blake Snell started Game 6 for the Rays. Charlie Morton was set to start Game 7 after allowing five runs over 4 1/3 innings in a Game 3 loss last Wednesday. Morton said he would be available in relief in Game 6 if needed. Morton, who turns 37 on Nov. 12, hopes to pitch next season but is not sure whether the Rays or any other team will want him.

The Tampa Bay Rays received some encouraging words from former President Barack Obama ahead of Game 6.

Obama spoke at a rally in Orlando, Florida, on Tuesday in support of Democratic presidential candidate Joe Biden and referenced the Rays’ five-game loss to the Philadelphia Phillies 12 years ago.

“I don’t know if we’ve got any Tampa Bay Rays fans here in Orlando,” Obama said. “Big game tonight. It’s do-or-die time. The last time the Rays were in the World Series in 2008, Florida sent me to the White House. The Rays fell just a bit short then, but, here in Florida, Democrats fell a little bit short in 2016 also. Over the next couple of weeks, Florida, you’ve got the chance to fix two mistakes. You’ve got the chance to set two things right. You can bring a World Series championship to the Sunshine State, and you can send Joe Biden and Kamala Harris to the White House.”

The Tampa Bay Rays are going with the same nine players in the batting order for Game 6 against Tony Gonsolin, but shuffled the top four for their second game in this World Series against the Los Angeles Dodgers rookie right-hander.

The Globe Life Field roof will be closed for Game 6 of the World Series between the Los Angeles Dodgers and Tampa Bay Rays.

The forecast called for a game-time temperature of 42 degrees Fahrenheit (5.5 degrees Celsius) Tuesday night and a chance of rain.

Los Angeles held a three games to two lead in the Series.

“We hope the roof is closed because it’s freezing,” Kiké Hernández of the Dodgers said shortly before the announcement.