The Latest: England coach to decide on isolating players 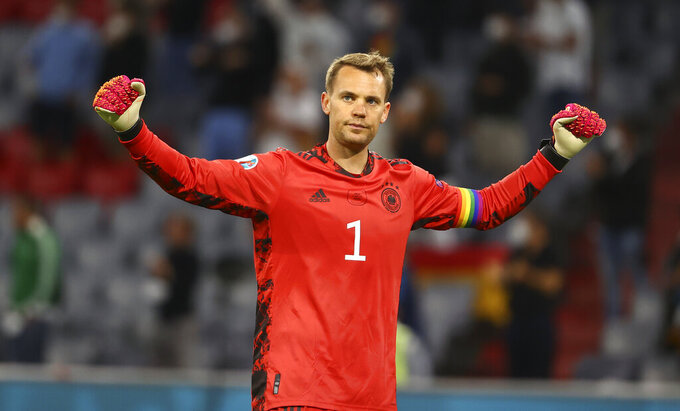 England coach Gareth Southgate is deciding whether to include Mason Mount and Ben Chilwell in the squad to face Germany at the European Championship after a week in self-isolation.

The players had to split from the rest of the England squad after being deemed close contacts following a conversation with Chelsea teammate Billy Gilmour after the match against Scotland. Gilmour later tested positive for the coronavirus.

Mount and Chilwell were able to do fitness work away from the rest of the England squad on a training field.

England hosts Germany at Wembley Stadium on Tuesday in the round of 16.

Southgate says “it’s really complicated because there’s the physical periodization you want for a game like this.”

Alvaro Morata and Mikel Oyarzabal scored in extra time to give Spain a 5-3 win over Croatia and a place in the European Championship quarterfinals.

Spain gifted Croatia a bizarre own-goal in the first half and then threw away a 3-1 lead but Morata made it 4-3 when he controlled a cross with one deft touch in the 100th minute and sent a shot past goalkeeper Dominik Livakovic.

Mislav Orsic had pulled one back for Croatia in the 85th and Mario Pasalic equalized in injury time.

Spain goalkeeper Unai Simon’s massive blunder gave Croatia a 1-0 lead in the 20th minute when he failed to control a long back pass.

Ukraine coach Andriy Shevchenko says he’s concerned about Sweden’s threat at set pieces in their match in the round of 16 at the European Championship.

Ukraine’s two losses at Euro 2020 came with a header from the Netherlands after a cross and from Austria scoring on a corner kick.

Shevchenko says “definitely we have to be really careful at set pieces. Sweden is a team that uses set pieces really well.”

Sweden has not yet scored from a free kick or a corner and coach Janne Andersson has noted the absence.

Andersson says Sweden has a bit of a height advantage “so we are hoping that we are able to take advantage of that” against Ukraine in Glasgow.

Croatia and Spain will play extra time in the round of 16 at the European Championship.

Mario Pasalic scored for Croatia in injury team to make the score 3-3 in Copenhagen.

The captains of Germany and England will wear rainbow armbands in the round of 16 at the European Championship.

The England team says the move by Germany goalkeeper Manuel Neuer and England striker Harry Kane is “to mark the end of Pride month.”

UEFA had looked into whether Neuer breached regulations by not wearing the official armband in the opening two games of Euro 2020. But Germany later said UEFA accepted its argument that the rainbow armband is a symbol of diversity and can therefore be categorized as a “good cause.”

Spain scored a bizarre first-half own-goal against Croatia in the round of 16 of the European Championship after a massive blunder by goalkeeper Unai Simon.

Simon failed to control a back pass in the 20th minute and the ball trickled slowly into the net.

Spain had dominated play until then but the goal gave Croatia a 1-0 lead.

Unbeaten and underestimated Sweden has quietly progressed into the round of 16 at the European Championship with a coach who says he no longer yells at players because it doesn’t make them better.

The Swedes will next face Ukraine in the round of 16 on Tuesday in Glasgow.

Sweden coach Janne Andersson says “to yell at people is rarely something that helps them so I don’t believe in that way of working.”

He says he prefers to “explain to them where they are doing things wrong and how they can improve.”

Andersson did have a confrontation with the Poland coaching staff during Sweden’s 3-2 win last week. Andersson says to yell at opponents is “a different thing.”

Belgium coach Roberto Martinez says Kevin De Bruyne’s injury is not serious and he will remain with the squad at the European Championship.

De Bruyne was replaced early in the second half of Belgium’s 1-0 victory over Portugal on Sunday in the round of 16. De Bruyne hurt his left ankle after being tackled from behind by Portugal midfielder João Palhinha.

Martinez says it’s too early to know if De Bruyne will be available for Friday’s quarterfinal match against Italy at Euro 2020.

The Belgium coach says Eden Hazard also doesn’t have a serious injury. The playmaker was replaced late in the match because of a muscle problem.

A health official in Finland says he hopes soccer fans in the country won’t travel to neighboring St. Petersburg for Friday’s European Championship quarterfinal match in the Russian city.

The Finns saw a spike in coronavirus cases that has been traced to soccer fans returning from Russia. Finland played two of its group matches in St. Petersburg but the team has been eliminated from the tournament.

Helsinki University Hospital doctor Markku Makijarvi says “I hope that it is now clear to everyone that the rest will be watched from Finland.”

More than 200 cases of the virus have been reported among people who have arrived from neighboring Russia in recent days and nearly 500 people have been quarantined. Health officials say these cases either were soccer fans or people who took part in the traditional mid-summer celebrations.

At least 2,000 Finns are estimated to have traveled to St. Petersburg for the earlier games.

Denmark coach Kasper Hjulmand says he expects captain Simon Kjaer to be able to play in the team’s quarterfinal match against the Czech Republic at the European Championship.

Kjaer had to exit Saturday’s game against Wales in the round of 16 after getting his right thigh wrapped in the second half. Hjulmand says Kjaer is still undergoing treatment but that the center back should recover in time for Saturday’s game in Baku, Azerbaijan.

Hulmand says ”they’re working on Simon and we all think he’ll be ready.”

Hjulmand says he has ”no reason to believe” that he won’t have all his players available.

World Cup champion France will play Switzerland for a spot in the quarterfinals at the European Championship.

The French team lost in the Euro 2016 final before winning the World Cup three years ago. They finished first in their group at Euro 2020 but won only one match.

The game against the Swiss will be played in Bucharest.

Spain will take on Croatia in Copenhagen in the early match.