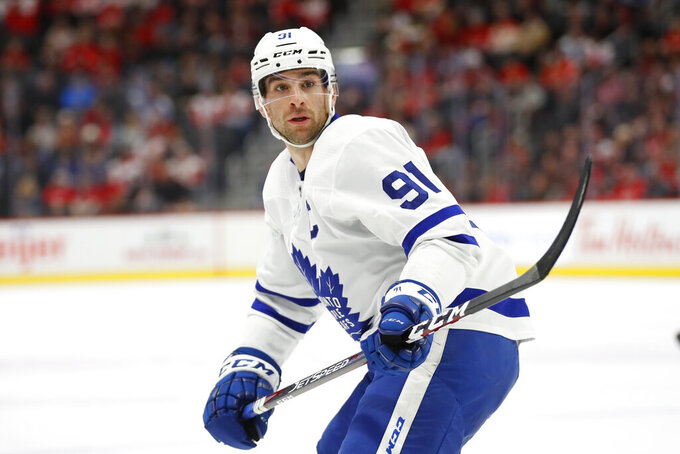 FILE - In this Nov. 27, 2019, file photo, Toronto Maple Leafs center John Tavares skates during the team's NHL hockey game against the Detroit Red Wings in Detroit. Tavares took his sticks home from the rink in Toronto to tape them up so he wouldn’t waste his limited time there. NHL players could start participating in voluntary small-group workouts, and teams began opening their training facilities Monday, June 8. Players learned Thursday training camps can open July 10, pending an agreement on returning to play later this summer, and they're now expected to trickle back in preparation of the resumption of the season. (AP Photo/Paul Sancya, File)

A Norwich player is one of two people at two English Premier League clubs to test positive for the new coronavirus ahead of the restart of competition.

Players and club staff are being tested twice a week. On Thursday and Friday, 1,200 people were tested at the 20 clubs.

The league does not identify who tests positive for COVID-19. Norwich confirmed the positive case but did not name the player.

An Arizona Coyotes staff member has tested positive for COVID-19 and is isolated at home in the Phoenix area.

The staffer is asymptomatic and feeling well, the team said.

All other staff members or players involved in phase 2 of the NHL’s testing protocol have tested negative as teams prepare to start voluntary small-group workouts on Monday.

With curling suspended in its Canada stronghold, Hall of Famer Warren Hansen says alternate plans need to be made to at least get top competitions on television.

A few lower-tier curling tour stops have been canceled but the first top-flight event of the campaign, the Masters in Ontario, remains a go for Oct. 20-25.

But with nothing on since March, Hansen, who spent more than two decades running event operations for the national federation until 2015 and has done consulting work since, says that’s too long for curling to go without a presence. Especially with other sports coming back such as soccer, golf, and auto racing.

“Find an arena that’s close to the airport, make a deal with some hotels and try and stage the things for at least your television audience,” Hansen said from Vancouver.

With the potential for air travel skittishness or restrictions hampering transport, Hansen thinks holding events in major cities such as Winnipeg or Calgary would be a solid alternative. That way, Hansen said, most of the top curlers could probably drive to the competition in a small rink to keep costs down.

“I think you’re going to have a (TV) audience that’s so starved for any sport and starved for curling,” Hansen said. “The audiences ... I think will be good regardless of what you do or how you do it.

The trials for the Beijing Winter Olympics are less than 18 months away, and Hansen, "We’ve got to make sure that we do everything we possibly can to keep something forging ahead in some way, shape or form.”

“I’ve been feeling unwell since Thursday; my body had been aching badly. I’ve been tested and unfortunately I’m covid positive. Need prayers for a speedy recovery, InshaAllah,” Afridi tweeted Saturday.

Afridi quit international cricket in 2017 and has since played in Twenty20 leagues around the world.

Former test opener Taufeeq Umar contracted the virus in May and has made a full recovery.