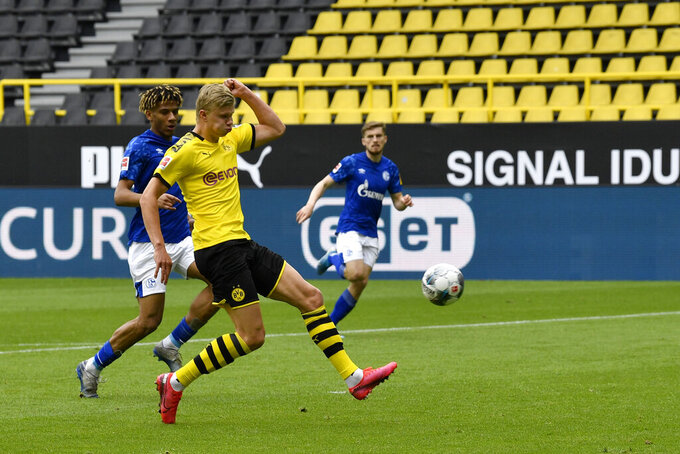 Dortmund's Erling Haaland scores the opening goal during the German Bundesliga soccer match between Borussia Dortmund and Schalke 04 in Dortmund, Germany, Saturday, May 16, 2020. The German Bundesliga becomes the world's first major soccer league to resume after a two-month suspension because of the coronavirus pandemic. (AP Photo/Martin Meissner, Pool)

With virtual graduations the norm, one of the engineers of the Miracle on Ice has done his part to congratulate students.

“Congratulations to you all on this amazing achievement in this difficult time,” Eruzione said. “Getting your Master’s Degree is quite an achievement, and although we are in a difficult period, you have accomplished something very special.”

Eruzione shared how the 1980 team was facing seemingly insurmountable odds to win, but the players believed in themselves and coach Herb Brooks, and won the gold medal by defeating Finland after taking down the mighty Soviets. He likened it to what people are going through now with the coronavirus pandemic, sacrificing against the odds.

“Eruzione is quite an inspiring speaker and he gave us all a terrific memory,” said Manhattville associated dean Laura Persky. “It was more powerful than I had imagined it would be to have him join our virtual celebration.”

South Carolina coach Will Muschamp has moonlighted as a wedding planner during the coronavirus.

Muschamp and his wife, Carol, hosted the wedding of Gamecocks equipment manager Larry Waters and his wife, Sara, at the Muschamps’ island home outside of Columbia on Friday night.

Muschamp posted a picture of the newly married couple on Twitter.

Muschamp, Waters and the rest of the Gamecocks staff have waited out the pandemic, which ended spring practice in mid-March. Waters and his wife had scheduled the wedding near downtown before the shutdown.

New York will allow horse racing tracks and Watkins Glen International car track to reopen with the easing of the coronavirus outbreak.

But Gov. Andrew Cuomo on Saturday was quick to add a caveat: “No crowds. No fans.”

At his daily briefing, the Democrat says he could envision a return of Major League Baseball in New York, also without fans. “If it works economically, that would be great,” he says.

Reigning Olympic champion Katerina Stefanidi of Greece outpaced two other pole vaulters to win the second edition of the Ultimate Garden Clash staged at their own training facilities.

On a hot day in Athens, Stefanidi cleared a height of 4 meters (13 feet, 1 ½ inches) a total of 34 times over 30 minutes in a rare track and field competition held during the coronavirus pandemic.

Combined, they had 85 successful jumps. Their male counterparts had 98 in their backyard competition May 3. Mondo Duplantis and Renaud Lavillenie shared the victory that day with 36 clearances over a bar set at 5 meters (16-4 3/4), while Sam Kendricks had 26 in an event from their backyards.

The women were connected by video link from their local training facilities. Stefanidi competed from Athens, Greece, Nageotte in Marietta, Georgia, and Newman from Bolton, Ontario.

Game day in the Bundesliga is a lot quieter than it used to be.

Instead of thousands of fans chatting and drinking beer outside the stadium, there were only a few locals out for a weekend bike ride as Borussia Dortmund hosted Schalke in a normally fierce local rivalry.

The German soccer league resumed Saturday after a two-month break due to the coronavirus, but with no fans in the stadiums.

The song “You’ll Never Walk Alone,” a favorite of Dortmund fans as well as Liverpool supporters, echoed around the stadium ahead of kickoff and the starting whistle could be heard outside. The arena has an 81,000 capacity but league rules permit just 213 people, including players, to be inside for the game, none of them supporters.

The Ruhr derby between Borussia Dortmund and Schalke kicked off in an empty stadium as all games began amid strict hygiene measures. Calls and shouts from coaching staff and players, and the thud of the ball being kicked, reverberated around the mainly deserted stands.

Team staff, and players who didn’t start, wore masks. Substitutes took their positions in the stands, rather than beside the fields as customary, while balls and seats were disinfected.

“It’s quite surreal,” Dortmund chief executive Hans Joachim Watzke told Sky TV. “I’ve received messages from all over the world in the last couple of hours that everybody is watching and then you go through the city and there’s nothing going on.”

The head of the World Health Organization said Saturday it will not be easy to make next year’s Tokyo Olympics a safe global gathering after the pandemic.

Speaking at a joint news conference with the IOC, the WHO’s director general Tedros Adhanom Ghebreyesus called for “national unity and global solidarity” to fight the coronavirus outbreak ahead of the Olympics. The Games, postponed this year, should bring athletes from more than 200 countries to Japan.

The Summer Games opening ceremony is now due on July 23, 2021, after the International Olympic Committee and organizers in Japan used WHO advice in March before agreeing a one-year delay.

“We hope Tokyo will be a place where humanity will gather with triumph against COVID,” Tedros said at WHO headquarters.

“It is in our hands, but it is not easy. If we do our best, especially with national unity and global solidarity, I think it’s possible,” he said.