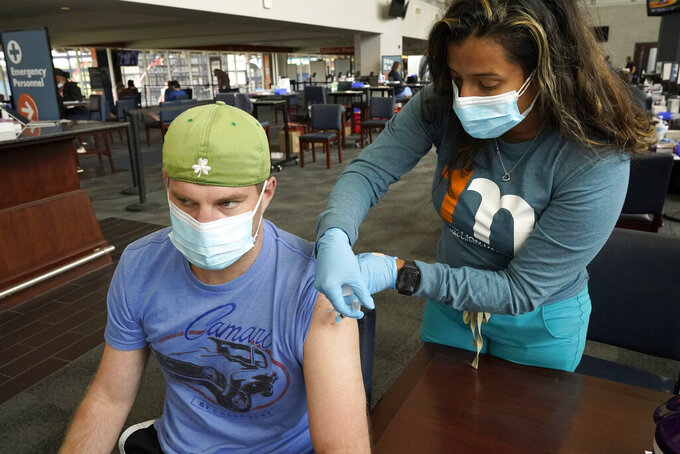 Kevin Fisher, of Quincy, Mass., left, receives his second shot of Moderna COVID-19 vaccine from RN Katherine Francisco, of Avon, Mass., right, at a mass vaccination clinic, Wednesday, May 19, 2021, at Gillette Stadium, in Foxborough, Mass. A month after every adult in the U.S. became eligible for the vaccine, a distinct geographic pattern has emerged: The highest vaccination rates are concentrated in the Northeast, while the lowest ones are mostly in the South. (AP Photo/Steven Senne)

KATHMANDU, Nepal — A repatriation flight is rescuing dozens of Spanish nationals who have been stranded in Nepal since a lockdown was imposed in the Himalayan nation to curb the spiking COVID-19 cases.

The charted flight arranged by the Spanish government was taking back 96 Spanish mountaineers, trekkers and tourists who arrived in Nepal to climb the mountain peaks or hike the trails before the country went on lockdown on April 29.

The plane arrived in Nepal on Thursday bringing in health aid materials given by the Spanish government. The shipment included respirators, 10 concentrators, face masks and antigen test kits.

Nepal has been recording its highest daily new cases and daily deaths this month, while struggling with shortages of hospital beds, medication and oxygen. The country so far has recorded 488,645 COVID-19 confirmed cases while 5,847 people have died.

— Big gaps in US vaccine rates among Northeast, Southern states

— Teen baker sweetens lives making desserts for those in need

CARSON CITY, Nev. -- Two Republican lawmakers in the Nevada statehouse were punished on Thursday for not complying with restrictions in place to prevent the spread of coronavirus.

Assemblywomen Annie Black and Jill Dickman went mask-less on the Assembly floor but refused to make known whether or not they had received vaccines.

Dickman was escorted out of the Assembly floor after staff told her that she would have to prove that she had been vaccinated. She refused.

In a party-line vote, Black was stripped of her right to vote on measures and address the chamber until she apologized. She remained on the Assembly floor.

HONOLULU — Hawaii’s governor says the state will once again require people receiving unemployment insurance benefits to search for work as a coronavirus testing program for travelers and growing vaccinations fuel a recovery of the tourism industry.

Anyone filing for unemployment will need to report at least three steps they took to look for work from May 30 through June 5 when they submit their weekly claim on June 6.

These steps can include filling out job applications, interviewing for jobs and registering at the jobs website HireNetHawaii.com.

The governor says Hawaii will maintain other pandemic-era unemployment insurance benefits, including a weekly $300 supplement to weekly benefits.

HOUSTON -- About 60% of the COVID-19 vaccine doses that have spoiled since Texas’ vaccination program began in December were wasted in the past two weeks, according to an analysis of state data.

According to a Houston Chronicle analysis of the roughly 60,000 vaccine doses spoiled since December, about 36,000 were lost in the past two weeks, indicating plummeting demand for the vaccine in Texas.

The number of wasted doses through spoilage of the highly perishable vaccine was still a minute fraction of the state’s vaccine allotment. The state is currently administering an average of about 144,000 vaccinations daily. Even so, that was less than half of the 290,000-vaccination-a-day peak last month.

Just one in three Texans were fully vaccinated against COVID-19 as of Thursday, mostly with the two-dose Pfizer and Moderna vaccines, while 42% have received at least one dose.

More than 51,000 people have died of COVID-19 in Texas during the 15-month pandemic out of the more than 3.2 million positive test results reported to the U.S. Department of Health and Human Services.

RENO, Nev. -- Nevada health officials admit the state’s goal of vaccinating 75% of the eligible population may not be realistic.

But they say progress toward that goal is continuing to pay dividends with the average number of new cases being reported statewide dropping to its lowest level since June 2020.

Of all Nevadans age 12 and older, 46% have had their first shot and 37% are now fully vaccinated.

BATON ROUGE, La. — Louisiana’s state epidemiologist and her 12-year-old daughter were among those stressing the need for COVID-19 vaccinations Thursday at the state Capitol.

Elise spoke about being part of a clinical trial for the Moderna vaccine. She said she’s grateful to be part of the effort to get more people vaccinated. State officials are now promoting vaccinations for children as young as 12.

Edwards, meanwhile, says the state’s vaccination rate remains too low. A little over 35% of the state’s eligible population have had a first shot; 30% have completed their vaccination dosages. “That’s not where we want it to be, quite frankly,” Edwards said. “I’m very disappointed in those numbers. We have to do better.”

Edwards said he is looking at possible incentive programs to encourage people to get vaccinated. He would not give details.

King County Health Officer Dr. Jeff Duchin issued a directive strongly recommending that residents age 5 and up wear face coverings whether or not they are vaccinated until 70% or more of the county’s residents 16 and older are fully inoculated. The agency projects the county will reach the threshold in late June.

Some 57% of those residents in King County — home to Seattle — were fully vaccinated on Thursday, according to the directive. The county is home to about 2.26 million people.

The directive applies to public indoor spaces including grocery and retail stores, government buildings and anywhere else members of the public can enter freely — unless a state-approved method of checking vaccination status is implemented. It does not apply to outdoor places.

Last week, the federal Centers for Disease Control and Prevention said fully vaccinated people can stop wearing masks outdoors in crowds and in most indoor settings and give up social distancing.

Those in the age group who received all required doses of the vaccine can register at governor.wv.gov to get their prize of a $100 U.S. Treasury bond or a gift card of the same value. Gov. Jim Justice announced plans for the incentive program last month, and it will apply retroactively to people who already received the vaccine.

The state is aiming to boost its sluggish vaccination campaign with the prize and has also expanded clinics at schools and businesses. Justice has a goal of vaccinating at least 65% of residents aged 12 and over by June 20, when his statewide mask mandate will be fully lifted. A month out, 55% of those residents have received at least one dose.

NEW YORK — People who get vaccinated at select state-run vaccination sites in New York next week will receive a lottery scratch ticket as the state tries to boost slowing vaccination rates.

Gov. Andrew Cuomo says the pilot program at 10 state-run sites will offer prizes from $20 up to $5 million and run from Monday to May 28.

The governor says there’s a one in nine chance of winning a scratch ticket prize in New York, which is joining states like Ohio that have similar lottery incentives. About 43% of New York state residents are fully vaccinated.

The administration of Gov. Tom Wolf says it will lift an order requiring unvaccinated people to wear masks in public once 70% of Pennsylvanians aged 18 and older are fully vaccinated, meaning at least two weeks beyond the last required dose.

The pace of vaccinations has been slowing for weeks, with most people eager to get the shot already having done so. Health Department data indicates Pennsylvania ordered only about a quarter of the vaccine doses it was entitled to last week.

TULSA, Okla. — The Tulsa Health Department is contacting 1,150 people who received improperly stored doses of the Pfizer coronavirus vaccine so they can get another shot.

The vaccine was kept in cold storage for up to two weeks longer than the recommended maximum of 14 days, Tulsa Health Department Director Bruce Dart said Wednesday.

The improper storage doesn’t present a health risk, according to Dr. Gitanjali Pai, Chief Medical Officer at the Oklahoma State Department of Health.

“However, past this 14-day mark, the vaccine may not be as effective at protecting you from COVID-19,” Pai said. “For this reason, we are asking these individuals to receive another dose of the vaccine.”

The doses were administered May 3-17 at four health centers in Tulsa County, the local health department says.

Sahin participated in a meeting of Turkey’s health advisory council via teleconference from Germany. Ozlem Tureci, BioNTech co-founder and Sahin’s wife, also joined the meeting. Both Sahin and Tureci were born to Turkish immigrant parents.

Pfizer-BioNTech agreed in December to provide 30 million doses of its mRNA-based vaccines to Turkey. Under a new agreement that was finalized on Thursday, Turkey will buy 60 million more doses, with an option for an additional 30 million doses.

The Health Ministry posted 9,385 new cases and 207 deaths in the past 24 hours on Thursday. Turkey has registered more than 5.1 million cases and 45,626, confirmed deaths since the start of the pandemic.

FOXBOROUGH, Mass. — A distinct geographic pattern has emerged in the U.S. drive to vanquish the coronavirus - the highest vaccination rates are concentrated in the Northeast, while the lowest are mostly in the South.

Experts say the gap reflects a multitude of factors, including political leanings, religious beliefs, and education and income levels. Close to 160 million Americans — 48% of the population — have received at least one dose of a COVID-19 vaccine, and 125 million are fully vaccinated against the virus.

Vermont is No. 1, with nearly 64% of its population receiving at least one dose. Mississippi is last at 32%.

Eight Southern states are in the bottom 10, all under 40%. Mississippi was followed by Louisiana, Alabama, Wyoming, Idaho, Tennessee, Arkansas, Georgia, West Virginia and South Carolina.

“Low vaccination rates will leave room for the virus to circulate, re-emerge and possibly form new variants,” said Tara Kirk Sell, a senior scholar at the Johns Hopkins Center for Health Security. “High vaccination rates are critical to keeping the disease under control, especially when we get back to the fall and winter.”

Closing the state gaps is vital to controlling the virus that has killed 588,000 Americans, health experts say.

TOKYO — A Japanese health ministry drug safety panel has given preliminary approval to coronavirus vaccines developed by Moderna and AstraZeneca.

That comes ahead of an expansion next week of the country’s slow-paced immunization program before the Tokyo Olympics.

The only COVID-19 vaccine currently approved for emergency use in Japan is developed by Pfizer. Formal approval of the two additional vaccines is expected Friday by a broader vaccine policy panel.

As the government pushes to host the Olympics in about two months, accelerating vaccinations is key to warding off mounting public concern about the safety of the event. Recent polls indicate more than 80% of Japanese oppose hosting the Olympics this summer.

BRUSSELS — The head of the World Trade Organization says it’s paramount to diversify vaccine manufacturing and develop production in Africa and Latin America to contain the coronavirus pandemic.

On the eve of a global health summit in Rome, WTO Director-General Ngozi Okonjo-Iweala told European Union legislators on Thursday that normal market forces for exports and imports can’t apply when it comes to the life-or-death issue of COVID-19 vaccines. Many of the world’s wealthiest nations were hoarding the shots for their own population.

She says the world has the capacity to manufacture 5 billion vaccine doses overall but as the virus has spread “we require twice and three times that. So the capacity was not there.”

A main challenge is diversifying vaccine production, which is now 80% concentrated in 10 European, North American and South Asian nations. She says “Africa, with 1.3 billion people, has 0.17 % of the manufacturing capacity of the world,” and Latin America has about 2% of global production capacity. “This has to change.”