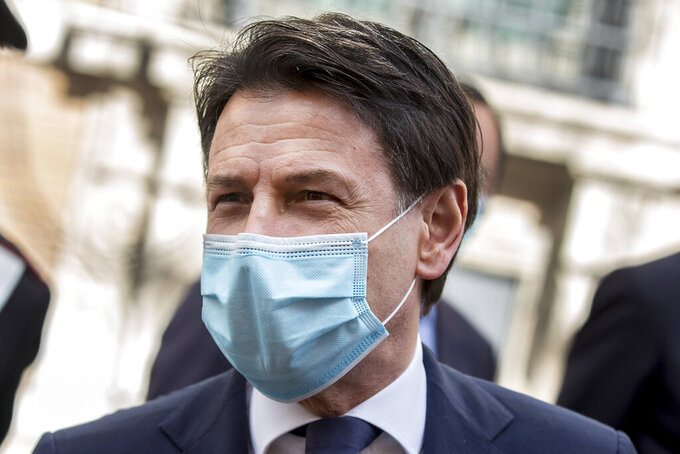 Italian Premier Giuseppe Conte leaves after addressing the Senate, in Rome, Thursday, April 30, 2020. Italy is in its eighth week of national lockdown to cope with COVID-19 emergency with some partial easing of restrictions on everyday life slated to take effect on Monday, with lifting of yet more limits set for later in coming weeks, on condition the rate of contagion doesn’t sharply start rising again. (Roberto Monaldo/LaPresse via AP)

The Latest on the effects of the new coronavirus outbreak on sports around the world:

A couple of weeks ago, former Montreal Canadiens tough guy Georges Laraque was running five or six days a week as he trained for a marathon.

Now, the former NHL enforcer’s biggest challenge is trying to breathe clearly as he fights COVID-19 from a hospital in Montreal.

“Now I can’t even get up without losing my breath. It’s insane,” he said.

In a series of videos from his hospital bed, the 43-year-old said he began feeling symptoms a week ago Sunday when he was helping to deliver groceries to vulnerable people in his community.

Over the next days, his condition deteriorated.

“I have pneumonia in both my lungs, they’re affected by the COVID because I have asthma, I have to have oxygen blowing through my nose,” said Laraque, who wore a hospital gown and could be seen coughing at times during the videos.

“The nights are the worst,” he said. “At night, I have fevers a couple times a night. I have to get up and take pills.”

Laraque thanked the staff at Charles-Le Moyne hospital who have been taking care of him, and told people not to feel sorry for him because, “I’m not the only one fighting this.”

Laraque played parts of 12 seasons in the NHL from 1997 to 2010, including eight with Edmonton. He capped his career with two seasons in Montreal.

The NHL could face another hurdle if the league decides to continue the 2019-20 season in the near future — getting non-Canadian resident players across the border to join their teams.

Prime Minister Justin Trudeau said Sunday that players would — at a minimum — need to follow quarantine protocols if they were to arrive in Canada while the border remains closed due to the pandemic.

“I think it’s a question we’ll have to look into,” Trudeau said. "Certainly at a strict minimum, anyone who arrives from another country will have to follow all the rules of quarantine in an extremely strict manner, but we’re not there yet in our discussions with the NHL.”

“We recognize that it’s a possibility, but it depends on an enormous amount of things, and I don’t want to speculate on this until there’s more discussion," he said.

The Associated Press reported earlier this week that Edmonton and Toronto were being looked at as possible “hockey pod” cities that could host the remainder of the NHL season during the summer months. Games would be played in air-conditioned arenas without fans.

Mondo Duplantis of Sweden and Renaud Lavillenie of France tied for the gold medal Sunday during a men’s pole vault competition held in their own backyards. It was a rare sporting event held during the coronavirus pandemic.

Duplantis and Lavillenie each cleared a height of 5 meters (16 feet) 36 times over a span of 30 minutes that was broadcast by World Athletics on its social media channels. Both had one miss. Sam Kendricks of the United States wound up third by clearing the bar 26 times.

They tried to figure out a tiebreaker before electing to award double gold. The 20-year-old Duplantis initially pushed for a three-minute playoffs, while the 33-year-old Lavillenie nixed the plan.

Lavillenie did clear his 36th bar seconds before Duplantis. The event was split into two 15-minute sessions with a short halftime.

The trio collaborated on the unique competition format since adjusting the bar wasn’t practical without officials in place.

Duplantis competed from his base in Lafayette, Louisiana. Kendricks was at his farm in Oxford, Mississippi, and Lavillenie took part from Clermont-Ferrand, France, as he pushed the family’s trampoline to the side in order to jump.

It was billed as the “Ultimate Garden Clash” and could be a model for future track events. The outbreak of COVID-19 has led to the Tokyo Olympics being moved to 2021, along with the track and field season being put on hold.

All Serie A clubs have been cleared to resume training this week on an individual basis following a clarification from the Italian government.

A week ago, the government had said that athletes in individual sports could resume training Monday and teams on May 18. That sparked confusion and frustration from Serie A clubs, which pointed out that their players would be allowed to train individually in public parks but not inside team training centers.

Then over the last couple of days, several regional governors said teams in their areas could resume training individually at club training centers.

Now the government says all athletes are allowed to take part in “individual sports activity, in public or private areas, while respecting the safe distance of at least two meters (yards) and respecting the ban on any form of gathering.”

The chairman of Crystal Palace says the Premier League could face years of legal challenges if this season is not completed due to the coronavirus pandemic.

Steve Parish offered public support for the league’s “Project Restart” plans after Brighton and West Ham expressed concerns about teams being forced to play their remaining games in neutral stadiums.

The league is working with the government to find a safe way of players resuming group training and playing games by June at the earliest.

Parish says “I want to complete the competition for reasons of sporting integrity. I want to crown Liverpool champions and give every other club a fair crack at the best league position they can achieve.”

Palace is 11th in the 20-team standings with nine games remaining.

Parish says “I certainly don’t want to have difficult conversations about curtailing, voiding and points per game. The ramifications of each are complex and could involve legal challenges that run on for months, if not years.”

Players from Spanish league clubs will be allowed to resume training on Monday as Spain eases some of the lockdown measures that had been in place because of the coronavirus pandemic.

The government is allowing players to train individually at the clubs’ facilities while observing a series of safety measures pre-established by the league and local authorities.

The league prepared a detailed four-phase training protocol that has already been distributed to clubs. Smaller group sessions and full squad sessions are likely to be allowed in the coming weeks.

All players were expected to be tested for COVID-19 before resuming their training sessions.

The Spanish league is expected to resume sometime in June.

Serie A soccer clubs are in limbo with several regions of Italy allowing players to begin practicing on an individual basis at training centers on Monday while the government has set a May 18 return to the practice field for teams.

Emilia-Romagna, Campania, Lazio and Sardinia have each given the go-ahead for teams in their regions to begin individual training. Those regions contain eight Serie A clubs: Bologna, Sassuolo, Spal, Parma, Napoli, Lazio, Roma and Cagliari.

The government announced a week ago that individual athletes can resume training on Monday May 4, while teams can restart May 18.