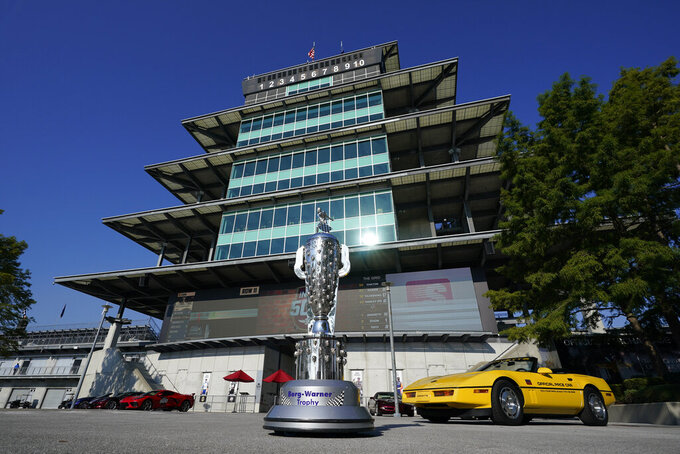 The Borg-Warner Trophy complete with a checkered flag mask, is displayed outside of the Pagoda before the Indianapolis 500 auto race at Indianapolis Motor Speedway, Sunday, Aug. 23, 2020, in Indianapolis.(AP Photo/Darron Cummings)

The Latest from the Indianapolis 500, which was delayed from Memorial Day weekend because of COVID-19:

Marco Andretti has led the field to the green flag for the 104th running of the Indianapolis 500, the familiar field of 33 roaring down the canyon-like front stretch of empty seats at Indianapolis Motor Speedway.

The warm-ups found Andretti following the IndyCar two-seater driven by his grandfather and 1969 winner Mario Andretti with his father and team owner Michael Andretti in the second seat. It was the first time that the three generations of the family were on the track at the Brickyard at the same time.

The call to start the engines was delivered by Roger Penske, whose family purchased the speedway along with the IndyCar Series. He promised that fans would be “back home again in Indiana” in 2021.

The countdown is on to the start of the Indy 500, which was delayed from its traditional date in May because of the coronavirus pandemic and will be run without fans for the first time in its 104 editions.

New track owner Roger Penske, whose team has four cars in the field, and IndyCar executives have tried to create an entertaining prerace show for broadcaster NBC. But the build up to “The Greatest Spectacle in Racing” is still somewhat eerie without the 250,000-plus fans who typically show up inside the Brickyard.

Driver introductions took place with the voice of the public address announcer echoing off the empty stands. There also will be no military parade or balloon release, two staples of race day. But there will be Jim Cornelison singing “Back Home Again in Indiana” and the Air Force's famed Thunderbirds performing a flyover.