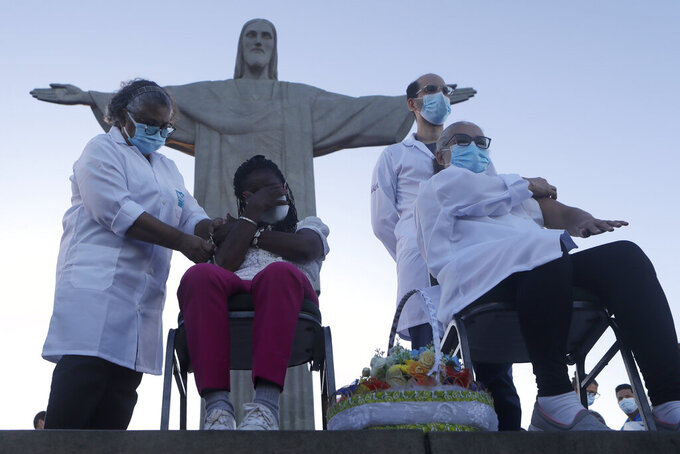 HONOLULU — Hawaii’s leaders say limited supply is the main thing constraining distribution of the coronavirus vaccine in the state.

Still, Lt. Gov. Josh Green says the state expects to be able to vaccinate everyone in the top priority category by the end of February. That category includes health care workers, long-term care facility residents, people over 75, and teachers and other front-line essential workers.

The federal government is distributing vaccine to each state in accordance with their share of the U.S. population.

— Hospital chaplains are on the front lines, helping patients unable to see families

BEIJING — China’s capital has recorded seven new coronavirus cases amid a lingering outbreak of infections in the country’s north, where a total of 81 additional cases were reported in three provinces Wednesday.

China has now recorded a total of 88,557 cases since the new coronavirus was first detected in the central Chinese city of Wuhan in late 2019. It has reported 4,635 deaths related to COVID-19.

China is hoping to vaccinate 50 million people against the virus by the middle of next month. It is also releasing schools early and telling citizens to stay put during the Lunar New Year travel rush that begins in coming days.

Meanwhile, World Health Organization experts are undergoing quarantine in Wuhan ahead of beginning field visits seeking to shed light on the origins of the virus, which is thought to have jumped to humans from animals, possibly bats.

SACRAMENTO, Calif. — Vaccine scarcity is continuing to plague California even as other indicators seem to show a slowing in the holiday-driven surge that led the state to be the first to top 3 million confirmed coronavirus infections.

San Francisco’s public health department is likely to run out of vaccine Thursday, in part because the state pulled back on administering a batch of Moderna vaccine.

Los Angeles County is starting to inoculate those 65 and older despite the scarcity.

But infection indicators are starting to show what the state’s top health official on Tuesday called “rays of hope.”

With 99.6% of first doses delivered already administered, officials are clamoring for the federal government to send more vaccine.

Noting that other states have doses unused, Gov. Jim Justice said Tuesday: “We’ve got them all in people’s arms and we’ve done exactly what we should have done. … I think performance ought to be rewarded.”

He says the state hasn’t received a promised 25,000 additional doses this week on top of its usual weekly allocation of about 23,000.

West Virginia officials say 7.4% of the state’s 1.78 million people have received at least one of two doses — the highest rate among the 50 states.

Scott's office said Tuesday night that the governor and the others were told that a contractor who provided services for coronavirus briefings on Jan. 15 had tested positive for the coronavirus.

The briefings are conducted with safety protocols, but officials decided to be cautious and self-isolate. The officials will be tested based on guidance from the Vermont Department of Health, and the governor will work remotely.

The statement didn’t say if the 62-year-old Scott or any of the other officials have exhibited symptoms.

MEMPHIS, Tenn. — U.S. Rep. David Kustoff of Tennessee is under self-quarantine after coming into close contact with someone who tested positive for the new coronavirus.

Kustoff said in a statement Tuesday that he tested negative for the virus a day earlier but was still advised to quarantine. He said he is working remotely.

His office did not identify the person he came into contact with.

Kustoff won a third term representing the 8th District in west Tennessee in November. His district includes suburban Memphis and parts of more than a dozen mostly rural counties.

OKLAHOMA CITY — Oklahoma on Tuesday surpassed 3,000 total deaths due to COVID-19 and the U.S. death toll topped 400,000 since the coronavirus pandemic began.

The Oklahoma State Department of Health reported that there was an increase of 43 deaths in Oklahoma for a total of 3,037 who have died due to the illness caused by the virus. The department reported 358,374 total cases, up from 2,994 deaths and 356,816 cases on Monday.

A tally by Johns Hopkins University reports that Oklahoma had the fourth highest number of new cases per capita in the nation with 1,269.19 per 100,000 residents during the past two weeks.

Deputy state health commissioner Keith Reed said Oklahoma has administered 243,807 vaccinations thus far, including 31,087 who have received both doses required of either the Pfizer or Moderna vaccines.

BOISE, Idaho — Idaho Gov. Brad Little says he will increase the number of Idaho National Guard soldiers helping with the state’s coronavirus response from 250 to 400 to increase vaccine distribution.

The Republican governor also announced Tuesday new grants for healthcare providers to more quickly administer the vaccine across the state.

Little says enrolled vaccine providers can use the grants to increase staffing, purchase needed equipment and supplies, and improve vaccine access for hard-to-reach and vulnerable populations. He says grant amounts will be based on the number of doses provided.

HOUSTON — Rapper Bow Wow apologized after Houston’s mayor called him out for attending a gathering during a weekend packed with concerts at nightclubs as Texas continues to grapple with the coronavirus.

Bow Wow also sounded off on Twitter to share his grievances, saying he wasn’t paid to appear and that he was there for a friend’s birthday party.

“Safe to say the mayor of houston hates my guts. I cant believe i get the blame for a whole weekend,” Bow Wow tweeted Monday. “I apologize if i did anything wrong. I love the city of houston.”

WASHINGTON — The U.S. death toll from the coronavirus has eclipsed 400,000 in the waning hours in office for President Donald Trump, whose handling of the crisis has been judged by public health experts to be a singular failure.

The running total of lives lost reported Tuesday by Johns Hopkins University is nearly equal to the number of Americans killed in World II. It is about the population of Tulsa, Oklahoma; Tampa, Florida; or New Orleans. It is equivalent to the sea of humanity that was at Woodstock in 1969.

It is just short of the estimated 409,000 Americans who died in 2019 of strokes, Alzheimer’s, diabetes, flu and pneumonia combined.

PORTLAND, Maine — Public health authorities in Maine said Tuesday that thousands of doses of coronavirus vaccine exceeded temperature requirements during their shipment to the state.

Maine Center for Disease Control and Prevention Director Dr. Nirav Shah said Tuesday the 4,400 doses of Moderna’s vaccine exceeded the required temperature during their journey to 35 sites in the state. He said the sites have set the vaccine doses aside and will receive replacement doses on Tuesday and Wednesday.

Shah said Operation Warp Speed and the U.S. Centers for Disease Control and Prevention are investigating how and why the error happened.

Maine has had more than 500 deaths from the virus since the start of the pandemic.

BOISE, Idaho — Lawmakers in the Idaho Senate have been told to monitor their health after a Senate staffer tested positive for COVID-19, but the Senate will continue operating.

Senate President Pro-Tem Chuck Winder said Tuesday that the staffer was infected by a family member outside the Statehouse and went to work Friday with no symptoms. She tested positive Saturday.

Winder says when he saw her, she was typically wearing a mask.

He says that the Senate would not be able to function without staffers if an outbreak occurred among them. Winder says senators who get sick can name substitutes.

He says most senators wear masks when around staffers.

TORONTO — Canadian officials say the country won’t be getting any Pfizer-BioNTech COVID-19 vaccine next week and 50% less than expected over the next month.

Maj. Gen. Dany Fortin says it is a major reduction but says things will return to normal after that. Fortin is leading Canada’s logistical rollout and distribution of vaccines.

He says the deliveries over the first two weeks of February have yet to be confirmed, but Pfizer is still expected to meet its contractual obligation to ship four million doses to Canada by the end of March.

U.S. pharmaceutical company Pfizer confirmed last week it would temporarily reduce deliveries to Europe and Canada of its COVID-19 vaccine while it upgrades production capacity.

MADRID — Several Spanish regions are tightening restrictions against the steep increase of coronavirus infections, awaiting for a government decision to allow regional curfews as early as 8 p.m.

A meeting on Wednesday is expected to decide on whether to tweak a nationwide emergency state to allow regional governments a stricter response to the country’s third resurgence of contagion. Roughly half of the regions have asked to bring forward the existing limit on a 10 p.m. curfew.

The health ministry recorded Tuesday 34,291 new COVID-19 cases in the past 24 hours and 404 new confirmed deaths, bringing the totals since the pandemic began to 2.37 million cases and at least 54,000 deaths.

Central Castilla La Mancha, eastern Valencia and northern Navarra are announcing new closures of bars and restaurants or restrictions to allow only food deliveries or outdoor dining. The western Extremadura region, currently with the country’s highest rate of infection, is further delaying the reopening of schools for 2021 until Jan. 25.

JERUSALEM — Israel’s Cabinet on Tuesday extended an existing nationwide lockdown through the end of January as the country contends with a runaway surge in coronavirus cases.

Most schools and nonessential businesses were closed earlier this month for two weeks, with outdoor gatherings restricted to 10 people. Those restrictions were extended until Feb. 1, and people landing in Israel must now present a negative coronavirus test result from at least 72 hours before their arrival.

Although Israel has administered the first dose of the coronavirus vaccine to more than 2 million people, the country of 9 million has seen an infection surge. Israel’s health ministry has reported more than 562,000 COVID-19 confirmed cases and at least 4,049 deaths. The ministry recorded a record-high number of daily infections on Monday, with more than 10,000 new cases out of around 100,000 people tested.

Israel’s health ministry also announced Tuesday that it is preparing to ramp up its vaccination efforts to 250,000 people per day, including people as young as 40.

LONDON — The U.K. has recorded more than 90,000 coronavirus-related deaths, just ten days after it passed the 80,000 threshold.

Government figures Tuesday show that another 1,610 people were reported to have died in the 28 days after testing positive for COVID-19, taking the total to 91,470. The daily increase is the highest daily figure reported since the pandemic took root in the U.K.

Figures released Tuesday have invariably been higher throughout the pandemic because of weekend reporting lag effects.

On Tuesday, the government recorded another 33,355 people were reported to have tested positive for the virus. That’s the lowest since Dec. 27.

The U.K., which is Europe’s worst-hit nation in terms of COVID-related deaths, recorded huge increases in cases around the turn of the year, with scientists blaming a new variant of the virus first identified around London and the southeast of England.