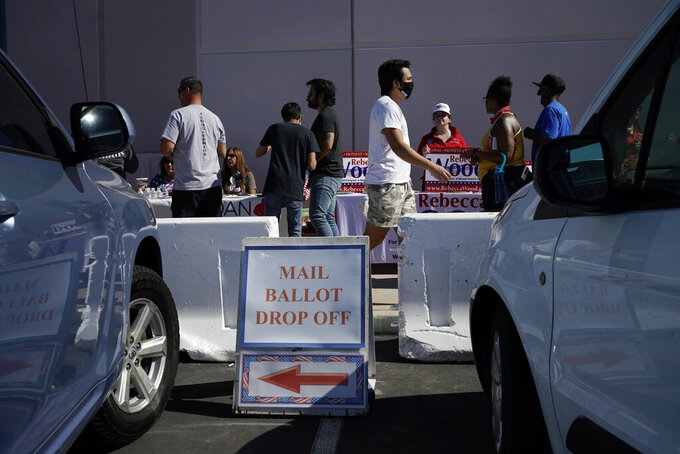 People wait in line at one of a few in person voting places during a nearly all-mail primary election Tuesday, June 9, 2020, in Las Vegas. (AP Photo/John Locher)

Steven Horsford has fended off five challengers in a Democratic primary for his southern Nevada U.S. House seat.

Results Wednesday morning show Horsford winning in Tuesday’s election. It came despite his recent admission that he had an extramarital affair. Several GOP candidates running for his seat called on him to resign from the 4th Congressional District seat.

The district, which extends north of Las Vegas through several rural counties, is a swing district that leans Democratic.

The former state senator and university professor is expected to handily win re-election in November.

Democrats make up 49% of voters in the district while Republicans make up about 21%.

Mark Amodei has easily defeated two challengers to win a Republican primary for a U.S. House seat in northern Nevada.

Amodei in 2018 handily defeated a more well-known tea party favorite, Sharron Angle in the Republican primary and went on to win re-election in the GOP-heavy 2nd Congressional District.

Democrats have been making gains among registered voters in the district, including in the Reno-area, but they’re not expected to overcome the Republican advantage among voters.

Susie Lee has defeated two Democratic challengers as she seeks re-election to her U.S. House seat.

The district includes southwest Las Vegas, Henderson and Boulder City and extends to the state lines with California and Arizona.

It’s expected to be the closest election battle in November. Lee won the swing district by 9% points in 2018 but President Donald Trump defeated Democrat Hillary Clinton there in 2016.

Nevada election officials have not released any results four hours after polls were supposed to close because voters are still in line waiting to cast ballots in southern Nevada.

Deputy Secretary of State for Elections Wayne Thorley said voters waiting long lines at all three polling places in Clark County could push any early results back to 11:30 p.m. or midnight.

Hundreds of people were still in line at polling places when polls were scheduled to close at 7 p.m. They who were in line are still allowed to cast ballots.

No results will be released statewide until all voters who were in line get to vote.

Polls are closing across Nevada and elections officials are cutting off any voters from joining existing long lines at polling places. Election officials said any voter in line before the 7 p.m. cutoff will get to cast a ballot.

The Secretary of State’s Office said no election results will be released in Nevada until every one of those voters has been able to vote.

Voters were waiting in lines for three hours and more at limited polling places in Las Vegas despite Nevada officials encouraging people to cast their primary election ballots by mail because of the coronavirus pandemic.

Nevada Deputy Secretary of State for Elections Wayne Thorley said his office had received a report of a three-hour wait at one Clark County polling place.

Voters waiting to cast ballots at the Clark County Election Department office told The Associated Press they had been waiting in line for four and five hours.

Voters at some Las Vegas-area polling places Tuesday were waiting in lines of three hours or more to cast ballots in a primary election to settle U.S. House races, legislative primaries and other state and local races.

Nevada Deputy Secretary of State for Elections Wayne Thorley said his office had received a report of a three-hour wait at one of only three polling places set up Tuesday in Clark County, though he didn't know which location.

Voters in line at one of polling place told the Associated Press they had been waiting for four and five hours to vote.

Clark County’s chief election official Joe Gloria said there were lines at all three Las Vegas-area polling places but he didn’t know some voters were waiting four or five hours. He said the county is doing everything it can to speed up lines but ballots have to be printed on demand as voters walk in the door because they must match the voter’s precinct and party affiliation.

The state reduced in-person voting sites because of the coronavirus and instead sent absentee ballots to voters that can be mailed back or dropped off. Gloria said most voters in line should have received a ballot in the mail.

Nevada voters who decided they didn't want to vote by mail are waiting in lines for up to an hour in Las Vegas and Reno to cast their primary election ballots in person but so far officials say things are running smoothly.

The secretary of state's office is reporting a typical primary turnout of between 20% and 25% statewide.

Washoe County voters have been waiting anywhere from a half hour to 90 minutes to vote in-person at the county's only polling place in Reno.

Lines up to an hour long were reported at three sites in and around Las Vegas where people could register to vote and have ballots printed to do so.

Nevada Deputy Secretary of State for Elections Wayne Thorley said no county had reported problems occurring at polling places to the secretary of state as of 2 p.m.

He says the lines of voters was expected because only three polls were open for in-person voting Tuesday in Clark County and just one in each of Nevada's other 16 counties.

Lines were reported Tuesday at three sites in and around Las Vegas where people could register to vote and have ballots printed to do so.

Clark County elections spokesman Dan Kulin acknowledged there were lines but declined to estimate wait times at the locations at community centers east and west of the Las Vegas Strip and at the county Elections Department office in North Las Vegas.

State election officials shifted the primary away from in-person voting and encouraged casting ballots by mail over concerns about the spread of the coronavirus.

Officials said early casting of mail-in ballots and the limited number of polling places opened were on track with past primary elections. Kulin said there were few delays at 27 locations set up in Clark County only for ballot drop-offs.

Long-time northern Nevada voters Ryan and Lana Caddel say they went to the Post Office Monday night to personally drop their absentee ballots in the mail box ahead of the state's first mail-in primary election.

The Sparks couple says they weren't worried about the coronavirus or the potential for voter fraud. They said they made the trip because they've had things stolen from their residential mail box before and didn't want to take any chances.

Both are regular voters. But Ryan says he doesn't always vote in primaries and might have skipped this one if not for the convenience of the mail-in ballot.

Some Nevada voters are embracing the state's first nearly all-mail primary election brought on by the coronavirus. Others are sitting this one out.

47-year-old Ryan Caddel of Sparks is a longtime voter in his native Nevada but he says he might have skipped this primary if not for the convenience of the mail-in ballot.

Jim Green of Reno says it's the first time he hasn't voted since he cast his first presidential ballot for independent John Anderson nearly 40 years ago. The 60-year-old medical technician says he didn't get an absentee ballot in the mail and didn't learn until it was too late Tuesday that he could have voted in person on Election Day.

Nevada election officials aren’t sure if they’ll have long lines — or any lines at all.

The state shifted the primary away from in-person voting over concerns of spreading the coronavirus, and instead encouraged voters to cast ballots by mail.

Early participation from mail-in ballots and a limited number of polling places so far is on track with past primary elections, but it’s anyone’s guess as to how many voters will turn up Tuesday, including those taking advantage for the first time of a new law allowing people to register to vote at the polls.