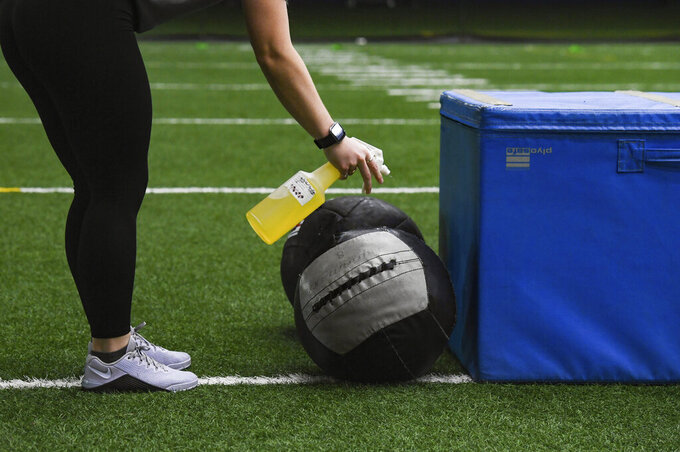 The Irish Rugby Football Union and Rugby Players Ireland agreed on the pay cut to run from July 1 to Dec. 31. They also agreed that 5% of the deferral will be subject to a retrospective salary reduction depending on the impact of the pandemic.

“The IRFU, the provinces and clubs remain in a highly precarious financial situation, making it critically important that an agreement was reached on this matter,” IRFU chief executive Philip Browne said.

Southeastern Conference athletic directors met in person Monday at league headquarters in Alabama to discuss the prospects for a football season with COVID-19 cases spiking throughout much of the South.

SEC Commissioner Greg Sankey said in a statement afterward that it's “clear that current circumstances related to COVID-19 must improve.”

The Big Ten and Pac-12 have said they would only play conference schedules this fall in football and other sports. Sankey said SEC leaders “believe that late July will provide the best clarity for making the important decisions ahead of us.”

The group met in the large Kramer-Moore Conference room to allow for social distancing. Other groups and individuals participated by videoconference.

Among topics discussed were possible scheduling options for holding athletic competition this fall, along with game management at events.

Kansas State had two student-athletes from unspecified sports still in quarantine as the football program resumed its summer access program Monday following a series of positive tests for the new coronavirus.

The men’s and women’s basketball teams along with soccer and volleyball teams continue their voluntary summer workouts.

Some of the FC Dallas traveling party returned to Texas on Monday, a week after the team was withdrawn from the MLS is Back Tournament because 10 players tested positive for coronavirus.

The team didn’t give any specific numbers but said the group that returned home included individuals who had tested positive for coronavirus after the team arrived in Florida last month. They have since tested negative in multiple follow-up tests.

Those who recently tested positive remain isolated in their hotel rooms at the Walt Disney World Dolphin Resort, where they will remain until cleared by medical officials to return to Texas.

FC Dallas previously revealed that all players and staff tested negative for the coronavirus before leaving Texas for the tournament on June 27. Two players tested positive upon arrival and subsequent tests found eight more infected with the virus that causes COVID-19.

The team plans to resume training at home later this week.

Nashville SC, which also withdrew from the tournament, said players who tested negative returned Monday. Team officials say those who tested positive remain in Orlando under supervision of medical and health authorities and will be returning later.

The National Junior College Athletic Association says it will not have a fall season and will instead attempt to play football and other sports in the spring.

Men’s and women’s soccer and volleyball will also be moved to the spring. Winter sports, such as basketball, will be slated to start in January, with a majority of championship events moved from March to April.

Major college football programs frequently recruit players from the top junior colleges, but without a fall season it will be more complicated for coaches at four-year colleges to evaluate those players.

If student-athletes have university housing and have tested positive, they are being isolated in a designated area on campus.

N.C. A&T student-athletes who are living on campus live in groups of 8-10 people and also are conducting workouts in groups of that size.

The school did not specify in a release which programs the positives came from. Those that tested positive were required to quarantine.

Forty-one student athletes and 21 staffers from those three programs participated in PCR testing. One student-athlete provided documentation of self-testing.

One person has tested positive in the latest round of checks for COVID-19 on players and club staff in the English Premier League.

The league says a total of 2,071 people were tested last week.

The person has not been identified.

The Chicago Marathon has been canceled because of the coronavirus pandemic.

The race was scheduled for Oct. 11. Organizers say registered participants are eligible for a refund or can defer their place and entry fee to the Chicago Marathon in 2021, 2022 or 2023.

“Hope drives us as runners and as humans,” Carey Pinkowski, the executive race director of the Chicago Marathon, said in a release. “My hope was to see everyone on the start line on Sunday, October 11, but our highest priority has always been the safety of our participants and our volunteers.”

Organizers say they are working on plans for a virtual experience “to recognize the dedication and commitment of everyone who would have taken part in the 43rd running” of the marathon.

The NHL says 43 players tested positive for the coronavirus from June 8 through the end of the league’s optional workouts.

The NHL opened Phase 3 Monday with the start of training camps for the 24-team playoffs, scheduled to open in two hub Canadian cities — Toronto and Edmonton, Alberta — on Aug. 1. Players had until Monday evening to elect to opt out of competition without penalty.

Los Angeles Angels left-hander Patrick Sandoval is back with the team after contracting coronavirus last month.

Sandoval disclosed his positive test Monday from the Angels’ summer camp, calling the virus “unlike anything I’d ever felt before.” He says he tested positive on June 22.

Sandoval thinks he caught it while golfing with a friend,because he had been careful about being out in public for several weeks beforehand. He said he endured three days of body aches, chills and fever before his symptoms lessened. He rejoined the Angels last week.

Sandoval went 5-3 with a 3.66 ERA last season as a rookie with the Angels, making three starts. He is among several candidates for a spot in the back end of the Halos’ rotation.

Chicago Cubs manager David Ross is skipping the team’s Monday morning workout because he is awaiting his completed result from his Saturday coronavirus test.

The team says five other Tier 1 individuals also missed the workout for the same reason. Tier 1, according to baseball’s 2020 operations manual, includes players and other on-field personnel.

“Out of an abundance of caution, we think it makes sense for the six of us to wait for clarity,” Ross said in a release. “Situations like this have not been a worrisome indicator of a positive test result to date.”

The Cubs say there should be “further clarity” later in the day.

The league says the event to preview each teams’ prospects heading into fall training camp is delayed until further notice. The three-day event was originally scheduled to be held beginning July 21.

The ACC says future decisions and announcements will take place “at the appropriate time.”

The Patriot League has joined the Ivy League in canceling fall sports, including football, because of the COVID-19 pandemic.

The Division I conference says it has still not determined whether winter and spring sports competition will be held and that it will consider holding fall sports in the second semester. The Ivy League made a similar announcement last week. The Patriot League is the first conference in the Football Championship Subdivision that competes in the Football Bowl Subdivision’s playoffs to suspend its season.

Athletes will be permitted to practice and train with coaches and in team facilities “provided health and safety conditions support such activities,” the conference said.

Swiss soccer club Zurich says it will field an under-21 team to try to save the season from being canceled because the first-team is isolating at home.

Zurich’s game on Saturday was postponed because multiple players and staff tested positive for the coronavirus.

The club says it will play Tuesday against third-place Basel by selecting young players from its backup roster.

Zurich also has to play title contender Young Boys and St. Gallen and says it wanted to avoid the league being annulled.

The 10 teams are already playing in midweek and on weekends to finish the season on Aug. 2 and meet a UEFA deadline for European competition entries. It is unclear when Zurich can play a re-scheduled game against Sion.

Zurich is in sixth place but in contention to earn a Europa League entry by finishing fourth.