The Latest: Italy experts warn of 2nd wave after reopening 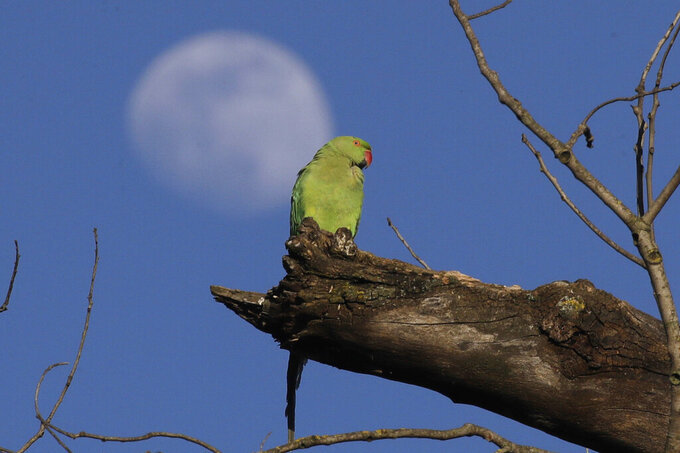 A parakeet sits on a branch as the moon rises in the background at Rome's Villa Pamphili park once it reopened after several weeks of closure, part of nationwide limited easing of some lockdown restrictions, on Monday, May 4, 2020. Italy began stirring again Monday after a two-month coronavirus shutdown, with 4.4 million Italians able to return to work and restrictions on movement eased in the first European country to lock down in a bid to stem COVID-19 infections. (AP Photo/Alessandra Tarantino)

The Latest on the coronavirus pandemic. The new coronavirus causes mild or moderate symptoms for most people. For some, especially older adults and people with existing health problems, it can cause more severe illness or death.

They are calling for intensified efforts to identify possible new victims, monitor their symptoms and trace their contacts

Dr. Silvio Brusaferro, president of the Superior Institute of Health, briefed a Senate committee on Tuesday about the next phase of Italy’s coronavirus pandemic. He joined experts a day after 4.4 million Italians went back to work and restrictions on personal movement were eased for the first time in two months.

Brusaferro says the key to keeping the outbreak under control lies in the early isolation of people with suspected infection, more tests and the quarantine of their close contacts. He says it will require “a huge investment” of resources for training medical personnel to monitor possible new cases. He adds any phone app that can help trace contacts, while useful, doesn’t substitute for the actions of people.

The head of the institute’s infectious disease department, Dr. Giovanni Rezza, told La Repubblica the coming weeks were essentially an “experiment” to see how the infection curve reacts to the easing of the lockdown and production shutdown.

“We are not out of the epidemic. We are still in it. I don’t want people to think there’s no more risk and we go back to normal,” Rezza told La Repubblica.

In Italy’s hard-hit northern Lombardy, tens of thousands of sick overwhelmed the health care system. Scientists say a second wave of infection would particularly hit the south, which didn’t have many infections.

Chancellor Angela Merkel’s spokesman, Steffen Seibert, says the German leader and several ministers held a telephone conference Tuesday with the chief executives of automakers in Germany and the head of the IG Metall industrial union.

Germany is home to automakers such as Volkswagen, Daimler and BMW, and the sector is a crucial employer in Europe’s biggest economy. The companies are restarting production in Europe after the coronavirus pandemic brought it to a near-standstill.

Seibert says participants agreed a working group should discuss economic stimulus measures “that constitute a contribution to modernization in the direction of innovative vehicle technologies.” He says they aim to discuss the results in early June.

LONDON — The British government’s chief scientific adviser has acknowledged that the country should have been testing more people for the new coronavirus early in the country’s outbreak.

Patrick Vallance told Parliament’s health committee that “if we’d managed to ramp up testing capacity quicker it would have been beneficial, and for all sorts of reasons that didn’t happen.”

Critics say Britain’s Conservative government responded too slowly when COVID-19 began to spread, and failed to contain the outbreak by widely testing people with symptoms, then tracing and isolating the contacts of infected people.

Countries that did that, including South Korea and Germany, have recorded lower death rates than those that did not.

The U.K. has recently expanded its testing capacity and is setting up a “test, track and trace” program as it looks to relax a nationwide lockdown.

Britain is one of the world’s hardest-hit countries in the pandemic, and looks likely to overtake Italy for the largest number of COVID-19 deaths in Europe.

BERLIN — Several German states are setting out plans to reopen restaurants and hotels in the coming weeks — the latest step in a gradual restart of public life.

Governor Markus Soeder of Bavaria, the state with Germany’s highest per capita coronavirus infection rate, on Tuesday set out what he said is a cautious plan to reopen the hospitality sector in his region.

Soeder says restaurants can serve outdoors starting May 18 and indoors a week later, with limited numbers of customers, limited opening times and strict hygiene precautions. Starting May 30, hotels can welcome tourists — though without opening saunas or swimming pools.

Chancellor Angela Merkel and state governors plan to consult Wednesday on Germany’s next steps in loosening coronavirus restrictions. But individual states, which are responsible for imposing and lifting lockdowns, increasingly are pressing ahead with announcing proposals of their own.

The northern state of Lower Saxony on Monday proposed opening restaurants on May 11 and hotels on May 25. The Baltic Sea region of Mecklenburg-Western Pomerania wants to open restaurants on Saturday, with hotels welcoming locals from May 18 and guests from other German regions a week later.

COPENHAGEN, Denmark — Churches in Norway can again carry out ceremonies as of May 10.

However, there can be a maximum of 50 people in churches, and there must be at least one meter (3.3 feet) between church goers.

Bishop Atle Sommerfeldt, the head of the Church of Norway, told The Associated Press that he is pleased more people will attend baptisms, weddings, funerals, and regular services.

Like elsewhere, priests in Norway, a predominantly Lutheran country, have carried out online services during the lockdown. Norwegian churches shut down March 12, the Norwegian news agency NTB wrote.

Tuesday’s report says the two discussed bilateral cooperation on fighting the coronavirus pandemic, and during the phone call, Rouhani thanked the Japanese government for its humanitarian assistance to Iran on combating the virus.

Rouhani was quoted as saying that with the “escalation of the United States’ cruel and inhumane sanctions against Iran,” the country faces “many problems today, even in the field of medical equipment and food supply.”

Iran, which has been the hardest-hit country in the Middle East in the pandemic, says its death toll rose to over 6,300 after 63 more people died on Monday. The Health Ministry’s spokesman, Kianoush Jahanpour, says Iran has so far confirmed nearly 100,000 cases.

STOCKHOLM — A Swedish newspaper says a technology institute in Sweden has found large concentrations of the coronavirus in Stockholm’s sewage system.

The analysis by the KTH Royal Institute of Technology was made in the purification plant in Bromma, west of the capital. The institute told Dagens Nyheter, one of Sweden’s largest newspapers, that the test that can predict a second virus wave.

Since the beginning of April samples have been taken from two treatment plants in Stockholm with the purpose of monitoring how the amount of virus residues develop over time, the newspaper reported.

Initial results showed the highest virus concentration at the Bromma waste water treatment plant, which handles wastewater from northern Stockholm suburbs. At another treatment plant, an increase in the content between the first and second samples was seen.

The institute told Dagens Nyheter that the survey had quickly grown into an international research project involving six countries. No one at the institute was immediately available for comments.

There are no known cases of infection spreading through wastewater or drinking water.

MADRID — Spain added 185 recorded deaths to its coronavirus tally, now counting a total of 25,613 diagnosed patients who succumbed to the COVID-19 disease.

The figures, which are in line with the overall slowdown of the pandemic in the country, don’t include thousands more who have died in nursing homes in March and April before they could be tested.

Despite the country’s limited ability to conduct tests until recently, health ministry data showed infections rose on Tuesday to 250,000, including some 30,000 identified by antibody tests after showing no symptoms or overcoming the disease.

Most new infections are happening among health workers, the data showed.

Top health official Fernando Simón says the easing trend is clear and the goal is avoiding any rebound of the outbreak. He says more than 123,000 people have recovered from the disease.

Spain this week started to roll back from a lockdown in place since mid-March, one of the world’s strictest.

LONDON — New figures show Britain has had more than 30,000 deaths among people with the coronavirus, possibly a third more than the official count.

The Office for National Statistics says there were 29,710 deaths involving COVID-19 in England and Wales through April 24 — 34% more than the government’s figure of 22,173 for the same period. Deaths in Scotland and Northern Ireland, collected separately, push the number over 30,000.

Britain’s official death toll, which includes cases where there was a positive test for the virus, stands at 28,734, just behind Italy’s 29,079 and the third-highest in the world.

The statistics office data, which is published with a 10-day lag, includes deaths where COVID-19 is suspected, even if there was no test.

Scientists say it will be hard to determine the total toll from the disease until there are complete statistics for excess mortality during the pandemic.

Britain’s statistics office says the number of total deaths registered in the week to April 24 was slightly lower than the previous week, but still more than double the five-year average.

NEW DELHI — Authorities in India’s capital are imposing a special tax of 70% on liquor purchases to dissuade huge gatherings a day after thirsty drinkers formed long queues at stores across the country.

The new tax on retail liquor purchases in New Delhi is called the “special corona fee.” It will be effective from Tuesday.

On Monday, after some lockdown restrictions were eased, thousands turned up at liquor stores without following social distancing guidelines. This led the authorities to shut many of the liquor shops. In some places, officers had to resort to baton-charge to disperse crowds.

The ban on liquor sales formed an important component of the ongoing six-week countrywide lockdown and was meant to rein the pandemic by limiting social gatherings. The ban, however, also deprived state governments in India of tax revenue.

India has recorded nearly 45,000 cases and more than 1,500 deaths. On Tuesday, the country reported almost 3,900 new infections for its highest single day rise.

The pace of infection is growing in India and experts say the virus still hasn’t reached its peak.

BERLIN — The head of Germany’s national disease control center says there will be a second wave of coronavirus infections, but his country is well-prepared to deal with it.

Lothar Wieler, the head of the Robert Koch Institute, was responding Tuesday to a question about whether a planned contact-tracing app is still relevant given that new infections have slowed significantly. Wieler put the current reproduction rate in Germany — the number of other people whom one person with the virus infects — at 0.71.

However, Wieler pointed to the nature of a pandemic and says “we know with great certainty that there will be a second wave — the majority of scientists is sure of that. And many also assume that there will be a third wave.” He says that means “this app is not coming too late.”

Wieler says Germany’s “preparation is definitely better” for a second wave. He added a lot has been done in recent months and doctors know more about how to deal with COVID-19 cases.

Germany is currently in the process of loosening restrictions imposed in March to slow the initial coronavirus outbreak.

WAGAH, India — Nearly 200 Pakistanis stranded in a nationwide coronavirus lockdown on the other side of the border in India are crossing back home.

Border security forces allowed masked passengers in private vehicles with luggage strapped to roofs to cross the Attari-Wagah border that separates the sprawling Punjab region split between Indian and Pakistan. The border opened Tuesday for the first time since the ongoing lockdown began on March 24.

India has recorded nearly 45,000 cases and more than 1,500 deaths. The lockdown was partially lifted on Monday to allow some employment for the millions of daily wage workers who have survived only on donated food. But the pace of infection is growing and experts say the virus still hasn’t reached its peak in India.