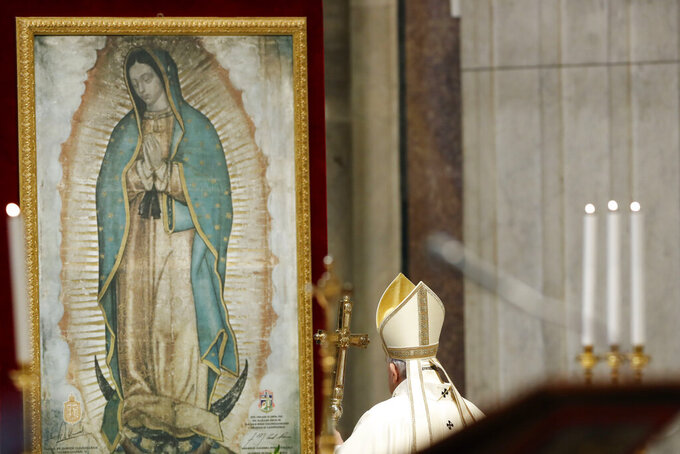 Pope Francis celebrates Mass on the occasion of the feast of Our Lady of Guadalupe, in St. Peter's Basilica at the Vatican, Saturday, Dec. 12, 2020. (Remo Casilli/Pool via AP)

TOKYO — Japan’s daily coronavirus cases have exceeded 3,000 for the first time while the government delays stricter measures for fear of hurting the economy ahead of the holiday season.

Experts say serious cases are on the rise around the country, putting burden on hospitals and affecting the daily medical treatment for other patients. They urged authorities to take measures such as suspending out-of-town trips and requesting stores to close early.

Recent media surveys show support ratings for the government of Prime Minister Yoshihide Suga have dropped about 20 points from around 70% during his first three months in office amid public discontent over his coronavirus handling.

Japan issued a non-binding state of emergency in the spring and has survived earlier infection peaks without a lockdown. Experts say the ongoing resurgence in the dry and cold season would be a bigger challenge.

SEOUL — South Korea has set another record for its daily coronavirus tally with 1,030, as authorities struggle to suppress the viral spread. The Korea Disease Control and Prevention Agency said Sunday the additional cases including two deaths raised the national caseload to 42,766 with 580 fatalities. About 80% of the new cases were found in the densely populated Seoul area, where authorities have shut nightclubs and other high-risk venues, banned late-night dining and taken other steps to slow the spread. But such measures have shown little effect. Prime Minister Chung Sye-kyun said Saturday his government may have to enforce its highest-level social distancing rules if the virus doesn’t slow down. Such restrictions would ban a gathering of more than 10 people, shut down schools, theaters and department stores and suspend professional sports leagues.

Meanwhile, President Donald Trump hasn’t publicly acknowledged this week’s record number of coronavirus deaths, hospitalizations and cases. He hailed the vaccine but made no mention of the toll the virus has taken.

BALTIMORE — The U.S. has recorded more than 16 million cases of COVID-19, by far the most of any country in the world, according to data kept by Johns Hopkins University.

Cases of the virus have been rising across much of the U.S., causing record death totals in recent days.

India and Brazil are the only two other countries that have reported more than 3 million cases of COVID-19. Globally, more than 71 million cases have been confirmed. The actual number of cases is believed to be far higher because many people haven’t been tested and some who get the disease don’t show symptoms.

The U.S. also leads the world in deaths related to the coronavirus at more than 297,600, including a record 3,309 recorded on Friday.

The increases come as millions of doses of the COVID-19 vaccine developed by Pfizer start rolling into U.S. hospitals on Monday. The first vaccines will go to hospital staff and other health care professionals.

The coronavirus has caused more than 1.6 million global deaths.

FRESNO, Calif. — California public health officials say the number of available intensive care unit beds in the vast San Joaquin Valley has dropped to zero for the first time Saturday. Just a day earlier, ICU capacity in region comprised of 12 counties was at 4.5%.

The news comes as ICU units fill up across California amid spiking COVID-19 cases. Last week, San Joaquin Valley and the enormous Southern California region were ordered to follow the strictest anti-COVID-19 rules under a new stay-at-home order.

Overflowing ICUs was a major factor in Gov. Gavin Newsom’s decision to implement the new order.

SPRINGFIELD, Ill. — The U.S. has reached a record 3,309 daily coronavirus deaths, according to data compiled by Johns Hopkins University.

The U.S. also reached a record daily confirmed infections at 231,775, according to a tally by Johns Hopkins University. That’s nearly 4,000 more than the previous high on Dec. 4.

The increases come as millions of doses of the COVID-19 vaccine developed by Pfizer start rolling into hospitals on Monday. The first vaccines will go to hospital staff and other health care professionals.

The U.S. leads the world in confirmed cases at 15.9 million and deaths at more than 296,000. The coronavirus has caused more than 1.6 million global deaths.

WASHINGTON — The Federal Aviation Administration says pilots may receive the COVID-19 vaccine but may not fly for 48 hours.

The FAA says it is requiring the observation period “to maintain the highest level of safety” in the airspace it regulates. The 48-hour observation also applies to air traffic controllers.

The U.S. Food and Drug Administration on Friday approved emergency use of a vaccine developed by Pfizer and shipments are expected in various states on Monday. The Pfizer vaccine requires two doses taken three weeks apart. The 48-hour period applies after both doses.

The FAA says it will monitor reaction to the vaccine. It requires similar waiting periods after aviation employees receive other vaccines, such tuberculosis and typhoid.

Italy could overtake Britain despite having 6 million people fewer than the U.K.’s 66 million, and trails only the much larger U.S., Brazil, India and Mexico, according to a tally by Johns Hopkins University.

Italy has the most deaths per 100,000 population among the most affected countries. Italy has added nearly 29,000 dead since Sept. 1.

More than 1.8 million Italians have contracted the virus since the start of the pandemic. Health experts say the numbers reflect an underfunded health care system with few ICU beds, government delays in imposing restrictions and an elderly population.

Global cases and death tolls are believed to greatly underestimated because of missed infections, limited testing and different counting criteria.

The Department of Health Services reported 77 more deaths on Saturday, increasing the state’s confirmed totals to 402,589 cases and 7,322 deaths.

The coronavirus hospitalizations on Friday reached 3,534, up 52 from Thursday and topping the summer surge high of 3,517 on July 13. There were 799 patients in intensive care units.

Army Gen. Gustave Perna says trucks will roll out Sunday morning as shipping companies UPS and FedEx begin delivering Pfizer’s vaccine to nearly 150 distribution centers across the states. An additional 450 sites will get the vaccine between Tuesday and Wednesday.

Perna is with Operation Warp Speed, the Trump administration’s vaccine development program. He says the vaccine was timed to arrive Monday morning so health workers would be available to receive the shots and begin giving them.

The Republican governor added the soldiers to the 100 he activated last month to help the state deal with surging infections and deaths. The 250 soldiers will help with mobile testing support, facility decontamination and coronavirus screenings. They are also helping at food banks.

State officials say nearly 120,000 Idaho residents have been infected. There have been 1,151 confirmed deaths.

The positivity rate is 20%, well above the 5% or less state officials recommend.

VATICAN CITY — Vatican citizens, employees and their families will begin to receive the coronavirus vaccine early next year, according to Vatican News.

The Vatican, a tiny city state of about 600 people in the center of Rome, has beefed up its coronavirus measures amid a resurgence of the outbreak in Italy, including requiring protective masks indoors.

In October, a resident of the Vatican hotel where Pope Francis lives and several Swiss Guards tested positive.

Italy has registered 1.8 million confirmed cases and more than 63,000 confirmed deaths, sixth highest in the world.

PARIS — The French government is allowing care home residents to spend time with their families and receive visits, even if residents are positive for coronavirus.

The deputy health minister in charge of elderly affairs says injecting the spirit of Christmas into care homes is “essential” to maintain family ties and fight loneliness. The relaxed rules will start Tuesday to Jan. 3.

Roughly one-third of France’s more than 57,500 virus deaths have occurred in care homes. Residents have been subjected to strict confinement measures, including being limited to their rooms, to curb infections.

Peru’s Health Ministry says “the adverse event is under investigation to determine if it is related to the vaccine or if there’s another explanation.”

Germán Málaga, professor of medicine at the Universidad Peruana Cayetano Heredia and coordinator of the trial, told RPP radio a 64-year-old volunteer showed a “decrease in strength in the legs” and the condition could be related to Guillain-Barré syndrome.

MINNEAPOLIS — New coronavirus patients say they socialized over Thanksgiving with people outside their households, despite emphatic public health warnings to stay home and keep their distance from others.

That’s what contact tracers and emergency room doctors are hearing repeatedly from patients across the country.

The virus was raging nationally even before Thanksgiving but was showing some signs of flattening out. It has picked up steam since, with new cases per day regularly climbing well over 200,000 by Friday.

That’s a 16% increase from the day before Thanksgiving, according to an Associated Press analysis. Deaths are averaging almost 2,260 per day over a seven-day period, about equal to the peak seen in mid-April when the New York City was under siege.

The dire outlook comes as the U.S. stands on the brink of a major vaccination campaign against COVID-19, with the Food and Drug Administration giving the final go-ahead Friday to use Pfizer’s shot.

The coronavirus has killed more than 295,000 Americans and infected 15.8 million.

SANTA ANA, Calif. — A California judge has ordered a 50 percent reduction of the population in Orange County jails to protect people from a coronavirus outbreak.

Superior Court Judge Peter Wilson’s decision comes in response to a lawsuit by the American Civil Liberties Union that says conditions at the jails violate the state’s constitution and disability discrimination law.

The county was ordered to file a plan with the court no later than Dec. 31. Orange County Sheriff Don Barnes says his department is “evaluating the order, its impacts and our options for appeal.”

If the order stands, it could result in the release of more than 1,800 inmates, Barnes says. He says the latest outbreak at Orange County jails had 74 confirmed cases, 75 tests pending and more inmates waiting to be tested.

BERLIN — Senior German officials are calling for tough new measures to curb the spread of coronavirus and record high cases.

The country’s disease control agency, the Robert Koch Institute, reported 28,438 confirmed cases in the past 24 hours and 496 deaths.

Germany, which had a much lower death rate than some of its large European neighbors in the spring, now has 1.3 million confirmed cases and 21,466 confirmed deaths since the start of the outbreak.

Finance Minister Olaf Scholz called for the swift closure of most stores and pledged financial support for affected businesses.

The governor of the southwestern state of Baden-Wuerttemberg, Winfried Kretschmann, says he expects a “hard lockdown” before Christmas.

Chancellor Angela Merkel is scheduled to meet the governors of Germany’s 16 states on Sunday to discuss the next steps in containing the pandemic.