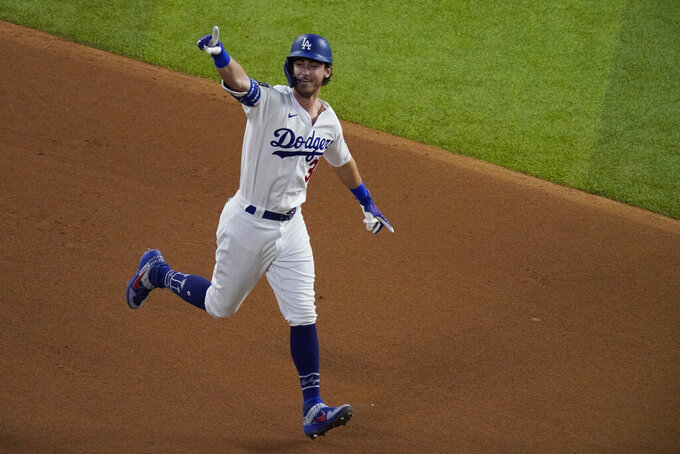 ARLINGTON, Texas (AP) — The Latest on Game 1 of the World Series (all times local):

A neutral-site crowd limited by the coronavirus to 11,388 at Globe Life Field, the new $1.2 billion home of the Texas Rangers, saw the Dodgers chase a wild Tyler Glasnow and break away. Game 2 is Wednesday night.

The Dodgers, who posted the best record in the majors during the shortened season, plan to throw a collection of relievers against Rays ace Blake Snell.

Kershaw, a regular season star with an erratic postseason history, allowed one run on two hits, struck out eight and left with an 8-1 lead.

Fresh off making three terrific catches in the NL Championship Series, Betts hit a solo home run and stole two bases. Bellinger launched a two-run shot in the fourth inning to break a scoreless tie -- his seventh-inning homer in Game 7 of the NLCS put Los Angeles ahead to stay against Atlanta.

The Dodgers are three outs from polishing off a Game 1 victory in this World Series. Los Angeles leads 8-3 entering the ninth inning.

Righty reliever Pedro Báez retired the top of Tampa Bay’s lineup in order in the eighth, including a routine flyout to center by Randy Arozarena. The Rays’ postseason breakout star is 0 for 3 in his first Series game.

Mookie Betts led off the bottom of the inning with a single. Betts walked and stole two bases in the fifth, the first player to do that in a World Series inning since Babe Ruth in 1921. Betts also homered in the sixth.

The Dodgers ended up with two on and two out, but right-hander John Curtiss came on and struck out Will Smith.

Joe Kelly was set to pitch the ninth for LA.

Behind the pitching of Clayton Kershaw and the speed and power of Mookie Betts, the Los Angeles Dodgers lead the Tampa Bay Rays 8-3 after seven innings.

Trying to mount a big comeback, Tampa Bay got RBI singles from pinch-hitter Mike Brosseau and Kevin Kiermaier in the seventh against reliever Víctor González. But the Rays were denied a chance to get closer when González snared Mike Zunino’s line drive and doubled Brosseau off second base to end the inning.

Mookie Betts hit a leadoff homer in the sixth inning, continuing a brilliant performance for the versatile star and helping the Los Angeles Dodgers open an 8-1 lead over the Tampa Bay Rays heading into the final part of Game 1 of the World Series.

Betts drove Josh Fleming’s first pitch of the inning over the wall in right for an opposite-field homer. Max Muncy tacked on an RBI double later in the frame.

Clayton Kershaw pitched six effective innings for the NL champions. The three-time Cy Young Award winner struck out eight and walked one. He is in line for his second Series victory in five starts.

Tampa Bay manager Kevin Cash tried to stick with his starter, and it didn’t work out for Tyler Glasnow. The Rays’ 6-foot-8 starter was pulled in the fifth inning after a career-high 112 pitches as the Dodgers stretched their lead to 6-1.

Glasnow walked Mookie Betts and Corey Seager leading off the fifth, and both came around to score before Cash finally lifted Glasnow -- an uncharacteristically slow hook for Tampa Bay’s bullpen-favoring manager.

Betts and Seager took advantage of Glasnow’s slow delivery to double steal while Justin Turner struck out, and Betts then scored on Max Muncy’s grounder to first, diving into the plate ahead of Yandy Diaz’s throw. Betts also stole second in the inning, and the Dodgers are the first Series team with three steals in an inning since the 1912 New York Giants.

Glasnow allowed an RBI single to Will Smith before Cash came to get him. Glasnow struck out eight, walked six and was charged with six runs.

The Rays got on the board in the top of the frame when Kevin Kiermaier smacked Clayton Kershaw’s hanging slider for a solo homer.

Kershaw had retired 13 straight. He’s punched out eight and raised his career postseason strikeout total to 201. Despite a checkered playoff resume, Kershaw is climbing the leaderboard for postseason dominance. He passed John Smoltz for second on the list with strikeout No. 200, and he could catch Justin Verlander at 205 before the end of the Series.

Kershaw has thrown 70 pitches through five innings and is in line for his second Series victory in five starts.

Cody Bellinger’s two-run homer has given Clayton Kershaw and the Los Angeles Dodgers a 2-0 lead over the Tampa Bay Rays after four innings.

The 2019 NL MVP connected on the first pitch he saw from Tyler Glasnow in the fourth, driving a 98 mph fastball over the right-center fence. Max Muncy was aboard after drawing a leadoff walk and advancing to second on Will Smith’s groundout to third.

It was the fastest pitch Bellinger has hit for a home run in his career, according to MLB.com.

After rounding the bases, Bellinger and his Dodgers teammates played it safe and celebrated with toe taps rather than emphatic high-fives. Bellinger knocked his right shoulder out of whack -- again -- when he and Kiké Hernández banged forearms on a leaping high-five after Bellinger’s tiebreaking homer in Game 7 of the NL Championship Series against Atlanta on Sunday night.

There was some question if Bellinger’s sore shoulder, which has popped out of place in the past, might affect his swing. Certainly didn’t look that way when Bellinger launched his fourth homer of this postseason.

Glasnow prevented further damage by getting two strikeouts with a runner on second.

Clayton Kershaw is now looking like the great Clayton Kershaw. His slider sharp, and showing pinpoint control, he struck out Brandon Lowe and Mike Zunino in a 10-pitch top of the third inning. The Dodgers lefty has retired eight in a row and has found his rhythm.

Rays starter Tyler Glasnow is getting it done with pure gas. He’s hitting 100 mph with his heater. He fanned Austin Barnes, Mookie Betts and Justin Turner in the bottom half, working around a walk.

It’s scoreless and pretty quiet so far. Even if there were a lot of fans inside the park, there wouldn’t be much to make noise about.

Clayton Kershaw is settling in as he makes his third start in four years in Game 1 of the World Series.

The Dodgers lefty, pitching just a few miles from his Dallas home, retired the side in order in the top of the second inning in the neutral-site series at the home of the Texas Rangers.

Kershaw’s second strikeout of the game was on Willy Adames, who is up to 18 strikeouts this postseason while hitting .128. Joey Wendle and Kevin Kiermaier both flew out to left. Kershaw retired five straight after two of the first three hitters of the game reached, on a single and a walk.

Tampa Bay right-hander Tyler Glasnow has surrendered his first hit, a seeing-eye, two-out single by Chris Taylor that just eluded a diving Adames in the hole at shortstop. Joc Pederson struck out swinging to end the inning.

Will Smith was the hard-throwing Glasnow’s first strikeout leading off the second. Glasnow has routinely been hitting 98 mph with his fastball, but got both Smith and Pederson swinging on curves in the low 80s.

The Dodgers’ Clayton Kershaw and the Rays’ Tyler Glasnow each pitched scoreless first innings in the World Series opener.

Kershaw started his fifth Series game and third opener by allowing Yandy Diaz’s single, then retired Brandon Lowe and walked Randy Arozarena before striking out Hunter Renfroe and getting Manuel Margot on a comebacker.

Los Angeles is in the World Series for the third time in four years, seeking its first title since 1988.

Tampa Bay has never won a championship. It lost to Philadelphia in 2008, its only prior Series appearance.

The World Series is underway deep in the heart of Texas, with the roof open and fans in the stands.

The national anthem was performed by Pentatonix, a Grammy-winning a cappella group formed in Arlington, Texas, that did a prerecorded version that was played on the big video boards. A four-jet flyover followed.

Four frontline healthcare workers who are serving during the coronavirus pandemic were in center field for the ceremonial first-pitch ceremonies, getting a loud ovation. Texas Gov. Greg Abbott gave the call to “Play Ball!” from near the third-base dugout.

Globe Life Field has a capacity of 40,518, and Major League Baseball said it will be about 28% full during the World Series, like it was during the NL Championship Series. Fans were in socially distanced pods of four seats each, with unsold seats zip-tied together to prevent them from being used.

Every ticket available for the seven-game NLCS and all seven potential World Series tickets were sold. The NLCS averaged 10,835 paying fans.

It is a pleasant night for the first World Series game played in Arlington since 2011, when the Rangers played in their second consecutive World Series. There were clear skies and the temperature at first pitch was 82 degrees.

Before Kevin Cash was hired as a first-time manager with the Tampa Bay Rays in December 2014, he had also been interviewed by the Texas Rangers for their vacancy that offseason.

Now Cash is leading the Rays in their first World Series since 2008, which is being played in the Rangers’ new $1.2 billion stadium with a retractable roof.

Cash said he is still “extremely appreciative” of the opportunity the Rangers presented in that interview process, and said there was a time then that he was excited about if he would get that job.

“But saying that, I’m pretty thrilled to be where I’m at, and in Tampa with all of the people I get to work with on a daily basis,” Cash said before Game 1, when the Rays were facing the Los Angeles Dodgers.

Jeff Banister got the Rangers job, and was there for four seasons before former Dodgers third base coach Chris Woodward replaced him two years ago.

Pentatonix will sing the national anthem before Game 1 of the World Series between the Los Angeles Dodgers and the Tampa Bay Rays. The Grammy-winning a cappella group from Arlington, Texas, prerecorded the song that will be shown on video at Globe Life Field.

Texas Gov. Greg Abbott will give the call of “Play ball!”

Ceremonial first pitch duties will be handled by four frontline healthcare workers who are serving during the coronavirus pandemic. Married nurses Jamie Edens and Ryan Ward are from Tulsa, Oklahoma. Erika Combs is a nurse in Dallas. Brittney Burns is a nurse practitioner from San Antonio.

Cody Bellinger was in his normal spot in the starting lineup for the Los Angeles Dodgers in Game 1 of the World Series against the Tampa Bay Rays.

Bellinger was batting sixth and playing center field Tuesday night, two days after knocking his right shoulder out of whack during his emphatic celebration after hitting a go-ahead homer in the clinching Game 7 of the National League Championship Series.

Kiermaier was still dealing with a sore left wrist after getting hit by a 99 mph fastball in Game 3 of the AL Championship Series against Houston.