The Latest: Las Vegas strip clubs given OK to reopen May 1 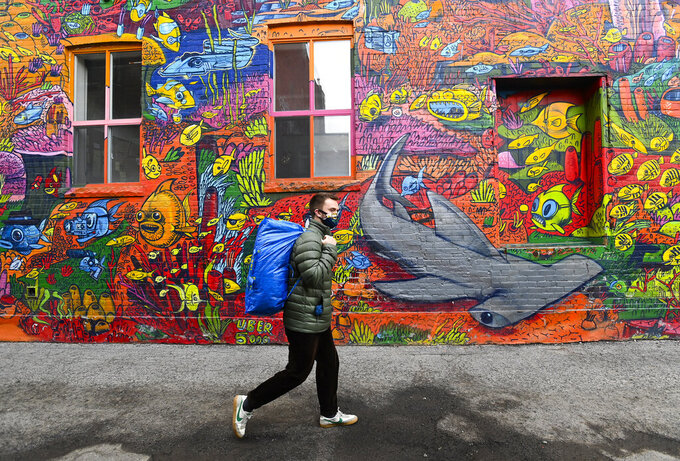 A person walks past a nature mural on Earth Day during the COVID-19 pandemic in Toronto, Thursday, April 22, 2021. (Nathan Denette/The Canadian Press via AP) 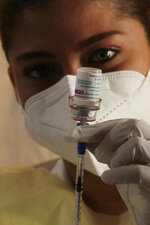 LAS VEGAS — Topless dancers can shed coronavirus restrictions beginning next weekend in Las Vegas and get face-to-face with patrons again.

But masks still will be required for adult entertainment employees and recommended for customers under rules accepted Thursday by a state pandemic task force.

Sin City strip clubs that went dark when Gov. Steve Sisolak ordered casinos, clubs and nonessential businesses closed more than a year ago can reopen May 1 at 80% of under strict social distancing guidelines.

The rules will allow strip club entertainers to get closer than 3 feet to patrons if the entertainer has received at least a first dose of a coronavirus vaccine at least 14 days earlier or if the dancer tests negative in a weekly virus test.

— Viral questions: How long does protection from vaccines last?

The announcement by Texas quotes the FDA and CDC as saying the adult woman has “symptoms that appear to be consistent with those few other reported cases” of a rare blood clotting disorder developed after receiving the J&J vaccine. No other information is being released, because of patient privacy and confidentiality.

Federal and state agencies have paused the J&J vaccine rollout due to concerns about blood clots. Federal officials already were examining six reports of the unusual clots, including a death, out of more than 6.8 million Americans given the one-dose vaccination so far.

HARTFORD, Conn. — Connecticut Gov. Ned Lamont says the state is seeing a slowdown in demand for coronavirus vaccinations, prompting officials to look for new ways to encourage people to get the shots and move closer toward herd immunity in the state.

Among the ideas is reaching out to major state employers such as submarine-maker Electric Boat Shipyard to hold clinics for workers. Requests for vaccine doses are now being accommodated for individual work sites that can put together a critical mass of people.

About 60% of the adults in Connecticut have received at least one dose.

Lamont said Thursday that he would ultimately like at least 70% to be vaccinated in Connecticut, noting that 89% of residents age 65 and older have received at least one dose.

DENVER — Colorado Gov. Jared Polis says the state has administered first doses of coronavirus vaccines to at least half of the eligible population and now needs to target people who have been hesitant to get a shot or have just procrastinated.

He says the state will look to make vaccine access easy, convenient and quick. The governor says three of Colorado’s mass vaccination sites will start offering walk-in and drive-in vaccination in addition to the same-day vaccine appointments that are already available.

Polis says that “the number of people who don’t want the vaccine is small.”

TORONTO — Canada is banning all flights from India and Pakistan for 30 days due to the growing wave of COVID-19 cases in that region.

The announcement came Thursday, hours after India reported a global record of more than 314,000 new infections in the previous 24-hours.

Canada’s health minister says half the people who are testing positive for the coronavirus after arriving in Canada by airplane came from India. Flights from India account for about one fifth of the country’s air traffic.

There are than 1 million people who live in Canada who have Indian descent. There are 100,000 Canadians who have Pakistani ancestry.

JUNEAU, Alaska — Organizers say a four-day dance and cultural event billed as the largest gathering of Alaska Natives in the southeast region of the largest state will return next year as an in-person event after widespread immunizations.

The Sealaska Heritage Institute says the Celebration event celebrating Tlingit, Haida and Tsimshian cultures will be held in Juneau from June 8-11, 2022. It was held virtually in 2020, and another event planned for this past January was scrapped.

Institute president Rosita Worl says the cancellation was necessary “to protect our people” and officials look forward to celebrating in 2022.

Worl said in a Thursday statement: “We survived this pandemic. We are still here.”

The event first held in 1982 draws thousands of people to Alaska’s capital.

PARIS — France’s prime minister is offering some good news to a nation living under numerous pandemic restrictions, saying the country’s third wave appears to have crested and outdoor café terraces, some shops and sporting and cultural activities may be able to open around mid-May.

Jean Castex said at a news conference that there has been a “real lowering of the viral circulation” in recent days in 80 percent of French territory.

Cafes — a major part of social life in France — have been closed since the fall.

Castex says a nightly curfew from 7 p.m. will remain in place for now. But travel restrictions will be lifted May 3.

Education Minister Jean-Michel Blanquer says some schools will open as of Monday, with middle and high schoolers sticking with distance learning until they too go back to class May 3.

SALT LAKE CITY — Utah Gov. Spencer Cox says the state's vaccine supply is beginning to outpace demand in some counties, and he's urging everyone who may be hesitant to get their shots.

Cox said during his weekly coronavirus news conference that Utah has prioritized putting as many needles into arms as possible at mass vaccination sites and will start transitioning to focus on more regional and community-oriented sites.

Cox added that authorities are starting to move some doses to Salt Lake County, Utah's most populated, where demand remains high.

State epidemiologist Dr. Angela Dunn urged vaccine-reluctant people to speak with their doctor or pharmacist about the vaccine’s safety and efficacy.

She said it is “not totally unexpected” that demand for vaccines is softening, and “now we’re starting to work into those populations who might have some hesitancy or are just taking their time to get vaccinated.”

ANKARA, Turkey — Turkey’s health minister says the spread of COVID-19 infections in the country has slowed, despite a 16th consecutive day of more than 50,000 cases.

On Thursday the country reported 54,791 new confirmed infections and 354 deaths in the last 24 hours.

The government extended an upcoming weekend lockdown to include a public holiday on Friday.

DES MOINES, Iowa — Vaccinations have been halted at a Fort Madison prison after nursing staff incorrectly gave 77 inmates too much of the Pfizer COVID-19 vaccine.

Department of Corrections spokesman Cord Overton tells the Des Moines Register that when the error was discovered, staff immediately sought guidance from the federal Centers for Disease Control and Prevention and from Pfizer.

Overton says the inmates involved were notified of the overdose and are being closely monitored. So far they have shown only the commonly associated side effects, including soreness at the injection site, aches, fatigue and fever.

Kimberly Koehlhoeffer, the mother of one of the inmates, says doctors told her son they had received six times the recommended dose.

The Pfizer vaccine is packaged as a concentrate that must be diluted with saline solution.

Two nursing staff members have been placed on leave pending an investigation.

PHOENIX — Arizona officials say more than 2 million residents are fully vaccinated against the coronavirus, or 28% of the state’s population.

Also Thursday, a state-run vaccination site opened at an event center in Scottsdale. Other sites are in Flagstaff, Tucson and Yuma.

TORONTO — Ontario Premier Doug Ford has apologized after his government reversed measures banning the use of playgrounds and letting police stop and question people who weren’t in their homes.

The restrictions had been met with a backlash from the public, police, health officials and opposition politicians.

Restaurants, gyms and classrooms across the province already are closed, and most nonessential workers are working from home.

Ford suggested his government will offer province-paid sick leave for COVID-19 patients but announced no details. He said he won't resign.

Ford is quarantining after a staff member tested positive.

A multi-country study suggests pregnant women who get COVID-19 have higher risks for death, intensive-care stays, preterm birth and other complications.

Pregnancy causes various changes in the body that may make women vulnerable to harm from the coronavirus. Pregnant women can gain some protection by getting vaccinated; recent evidence suggests the Moderna and Pfizer vaccines are safe to use in pregnancy.

The results were published Thursday in the Journal of the American Medical Association Pediatrics, echoing smaller studies. The research involved hundreds of pregnant women in 18 countries around the planet. It was sponsored by a research fund at the University of Oxford, where the lead authors work.

On Wednesday, the preliminary results of a report of 35,000 U.S. women who received either the Moderna or Pfizer shots while pregnant showed their rates of miscarriage, premature births and other complications were comparable to those observed in published reports on pregnant women before the pandemic.

VATICAN CITY — The Vatican will give the second dose of coronavirus vaccines to some of the 1,400 homeless people, migrants and poor who got their first shot a few weeks ago in the walled city state.

The inoculation session Friday in the Vatican auditorium comes as Pope Francis celebrates a feast day honoring the saint of his birth name — Giorgio, or Jorge. The Vatican says the 600 people who will get their second doses of Pfizer will join Francis in a party.

They received their first doses during Holy Week.

The Vatican City State purchased its own vaccines to inoculate Holy See citizens and staff. It has been giving its extra doses to the neediest around Rome. In addition, the pope has been making regular donations of ventilators and other medical equipment to poor countries.

CAIRO — Developers of the Russian COVID-19 vaccine say they signed a deal with a leading Egyptian pharmaceutical company to manufacture more than 40 million doses annually in Cairo.

The Russian Direct Investment Fund, along with Egypt’s Minapharm and its Berlin-based subsidiary, issued a joint statement saying the technology transfer will begin immediately. It expects the roll out of the Sputnik V vaccine in the third quarter of 2021.

Production will take place in Minapharm’s biotech facility in Cairo for global distribution.

Russia has been marketing Sputnik V abroad despite the comparatively slow rollout at home and limited production capacities.

DAMASCUS, Syria — Syria’s health minister says the government has received a batch of 203,000 COVID-19 vaccines as part of a push to speed up inoculations in the war-torn country.

The arrival of the United Nations-secured shots on Thursday comes as a new wave of infections overwhelms medical centers around Syria. The AstraZeneca vaccines are part of a campaign aiming to vaccinate 20% of the country’s population before the end of the year.

Syria’s government controls two-thirds of the country, with the rest held by rebels and Kurdish factions. Millions have fled the country or been displaced internally, and the war has killed half a million people.

LONDON — Organizers say 4,000 people will be able to attend the ceremony for Britain’s leading music prize next month as part of the government’s easing of coronavirus restrictions.

The Brit Awards said Thursday in a statement that audience members attending the indoor ceremony at London’s O2 Arena on May 11 will not have to socially distance or even wear face coverings once seated. It will be the first major indoor music event in the country with a live audience in more than a year.

Attendees must show proof of a negative coronavirus test to enter and follow travel guidance for getting to and from the venue.

Organizers are giving 2,500 tickets to essential workers in greater London to honor their work through “difficult times.”