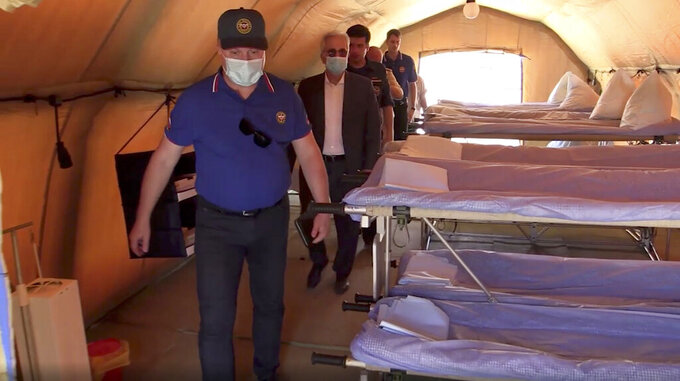 In this photo taken from a footage provided by Russian Emergency Situations Ministry press service, Russian and Lebanese medical specialists visit a Russian field hospital set up in Beirut, Lebanon, on Thursday, Aug. 6, 2020. Russia's emergency officials say the country sent five planeloads of aid to Beirut after an explosion in the Lebanese capital's port killed at least 100 people and injured thousands on Tuesday. Russia's Ministry for Emergency Situations sent rescuers, medical workers, a makeshift hospital and a lab for coronavirus testing to Lebanon. (AP Photo/Ministry of Emergency Situations press service via AP)

BEIRUT (AP) — The Latest on the explosion in Beirut (all times local):

Lebanon's state news agency says the chief of the customs department has been questioned by a judge over this week’s deadly blast in Beirut, after which the judge placed him under arrest.

The agency says investigative Judge Ghassan Khoury decided Badri Daher should remain in custody after questioning him for five hours on Friday. Sixteen other port officials and staffers are also under arrest.

Daher told The Associated Press on Thursday that he and his predecessor sent six letters, the last of which was in 2017, to a judge, warning repeatedly that the huge stockpile of ammonium nitrate stored in the port was a danger. They had asked judicial officials for a ruling on a way to remove it.

Daher said it was his duty to “alert” authorities of the dangers but that is the most he could do.

The United Nations official in charge of emergency relief has released $6 million for the response to the devastating explosion at Beirut’s port, bringing the total U.N. funding for relief efforts to $15 million.

Under-Secretary-General for Humanitarian Affairs and Emergency Relief Mark Lowcock said the latest money is intended for trauma care and other urgent hospital needs, the repair of damaged homes for the most vulnerable people, and for logistical support.

The $6 million from the Central Emergency Relief Fund comes on top of $9 million in released funding released from the U.N.'s Lebanon Humanitarian Fund to address primary health needs and to provide food assistance.

“This blast ripped through a country already facing civil unrest, economic hardship, the coronavirus outbreak, and a heavy burden from the Syrian refugee crisis,” Lowcock said. “Despite everything, the people of Lebanon have remained generous hosts to millions of Syrian refugees and a beacon of humanity for us all.”

While the Lebanese people are strong, he said “they are being severely tested” and “our response should be swift and determined.”

The U.N. Office for the Coordination of Humanitarian Affairs (OCHA), which Lowcock heads, said it coordinated the deployment of experts to assist the first responders in Beirut.

OCHA said the United Nations and its partners are urgently assessing the situation and mobilizing emergency assistance, including relief items such as temporary shelters for approximately 300,000 displaced people, including 80,000 children.

Health organizations are working to maintain COVID-19 services while helping victims of the explosion, it said.

The World Health Organization is scrambling to deploy $1.7 million worth of personal protective equipment to Beirut after 17 containers filled with supplies for the COVID-19 response were destroyed in this week's massive explosion.

Dr. Rick Brennan, WHO’s emergencies director for the eastern Mediterranean, expressed concerns that the coronavirus outbreak in Lebanon could now get worse in the aftermath of the blast.

He says the “massive extra burden of injured people” could cause the health system to be “overstretched” by the emergency and coronavirus responses.

Brennan said the “huge volume” of supplies from a regional WHO hub will be needed to replace lost COVID-19 gear like aprons, gloves, masks and respirators. They are expected to arrive via a “phased series of flights” over the next week — with the first coming in the next two to three days.

He noted concerns about the “debris” and particulate matter still in the air following Tuesday's deadly chemical explosion. Masks could be useful not just against the coronavirus but for people who have respiratory or heart disease.

Hezbollah leader Hassan Nasrallah says the explosion at the Beirut port reveals nepotism and corruption that can’t be ignored in Lebanon and that those responsible should be brought to justice.

Still, Nasrallah didn’t rule out a missile attack or an act of sabotage. He said that storing explosive materials like ammonium nitrate at the port for so long means “it is partially an issue of negligence, corruption, nepotism” that should not be ignored.

Nasrallah added that if there is more confidence in an investigation carried out by Lebanon's military, then so be it. He said nothing about an international investigation, which has been suggested and supported by the French and other Lebanese politicians.

Nasrallah also said his group’s domestic opponents are using the blast to blame Hezbollah and to turn public opinion against it.

“You will see no results,” he said

Lebanese President Michel Aoun says there are two possibilities behind Tuesday’s blast — either negligence or “external intervention” by a missile or a bomb.

Aoun said Friday that he asked France for satellite images to see if there were warplanes or missiles in the air at the time of the blast.

The blast is believed to have been caused when a fire touched off 2,750 tons of ammonium nitrate that had been stored at the port since it was taken from an impounded ship in 2013. The cause of the initial fire is not known.

Aoun told journalists that he received information on July 20 about the stored material and “immediately ordered” military and security officials to do what was necessary. He did not elaborate. He said several governments in charge since 2013 received warnings about the material.

He said the investigation is concentrating on 20 persons. He rejected an international investigation into the blast, saying that it will make us “lose the truth.”

The Vatican described that donation as “initial aid” that is intended as a sign of the pontiff’s “fatherly closeness to people in serious difficulty.”

The aid has been sent through the Vatican’s diplomatic mission in Beirut.

The Vatican noted that churches and monasteries were among the buildings destroyed by the blast in the port.

Already underway is “an immediate emergency and first aid response” including medical care, shelters for the displaced and center of basic needs made available by the church through various Catholic charities, the Vatican said in announcing the papal donation on Friday.

European Council President Charles Michel is heading to blast-ravaged Beirut for weekend talks with Lebanon’s leaders as the EU weighs up its contribution to a donor conference in coming days.

Michel, who chairs summits of the EU’s 27 national leaders, will hold talks on Saturday with Lebanon’s president, prime minister and the speaker of parliament.

He will also take part in a French-organized donor conference, along with the EU’s crisis management commissioner. Brussels has said that the virtual meeting would take place on Sunday, but France has yet to confirm a date.

The EU has sent more than 300 rescue workers, sniffer dogs, vehicles and equipment to Lebanon and around 33 million euros ($39 million) is being provided to help address emergency needs, despite concerns that the money might be misused due to deep corruption in the country.

EU commission spokesman Peter Stano said Friday that Europe’s leaders are underlining the need for change in Lebanon, which was already shaken by a severe economic crisis and the coronavirus pandemic before Tuesday’s massive explosion at the Beirut port.

He says the tragedy “is a wake-up call also for the Lebanese politicians to start efforts to unite themselves and to embark on a very serious reform effort, because it is so obvious to Lebanese people and also to Lebanese partners outside that Lebanon needs profound reforms.”

U.N. organizations are stepping up efforts to help Beirut’s beleaguered population after a chemical explosion, expressing concerns about food shortages, a lack of COVID-19 protective gear, and tens of thousands of homeless children.

At a U.N. briefing in Geneva on Friday, World Health Organization spokesman Christian Lindmeier said the organization was appealing for $15 million for emergency trauma and humanitarian health support. He said 17 containers laden with personal protective equipment — much needed for fighting the coronavirus outbreak — were destroyed in the blast. WHO has sent in trauma and surgical supplies already.

UNICEF spokeswoman Marixie Mercado says as many as 100,000 children are among those whose homes were damaged or destroyed and have now been displaced.

She says the areas around the blast faced the most active community transmission of COVID-19, and said it was “impossible for those affected to practice safe distancing” — alluding to recommendations by WHO and other health officials that people should keep a safe distances from each other to fight the coronavirus.

World Food Program spokeswoman Elisabeth Byrs says the agency's allocating 5,000 food parcels to families in Beirut, noting that Lebanon imports 85 percent of its food — much of it through the now-damaged Beirut port.

The Saudi government said Friday a specialized team from the King Salman Humanitarian Aid and Relief Center will supervise the distribution.

The U.N. human rights office is calling for an independent investigation into the Beirut explosion, insisting that “victims’ calls for accountability must be heard.”

Spokesman Rupert Colville of the U.N. High Commissioner for Human Rights cited the need for the international community to “step up” to help Lebanon with both a quick response and sustained engagement.

He said Lebanon is facing the “triple tragedy of a socio-economic crisis, COVID-19 and the ammonium nitrate explosion" that devastated the capital on Tuesday.

Colville also called for the poor and most vulnerable to be respected as Beirut and Lebanon rebuild, and urged Lebanese leaders to “overcome political stalemates and address the grievances of the population.” That was an allusion to large protests that broke out in Lebanon in October.

A team of 22 French investigators has started work in Beirut to search for evidence and bodies from Tuesday’s deadly explosion and help Lebanese authorities determine what caused it.

Based on information from Lebanon so far, France’s No. 2 forensic police official Dominique Abbenanti says the explosion “appears to be an accident” but that it’s too early to say for sure.

In an interview with The Associated Press, he predicted that “the death toll will grow” as more bodies are found.

French investigators are involved at the request of Lebanon, and also because one French person died and at least 40 were injured.

Eric Berot, chief of a unit involved in the investigation, says the zone the investigators cover "is enormous. It’s a titanic job.”

He says the investigation is complicated by the huge scale of the damage and “the Lebanese situation,” referring to the political and economic crisis in the country before the explosion.

Rescue teams are searching the rubble of Beirut’s port for bodies, nearly three days after a massive explosion sent a wave of destruction through Lebanon’s capital, killing nearly 150 people and wounding thousands.

French and Russian rescue teams with dogs are searching the area, and at least three more bodies were recovered in the last 24 hours, bringing the death toll to 149.

The government has launched an investigation as it faces mounting criticism, with many Lebanese blaming the catastrophe on negligence and corruption.

The blast was apparently caused by the ignition of 2,750 tons of ammonium nitrate, a chemical used for explosives and fertilizer, that had been stored at the port since being confiscated from an impounded cargo ship in 2013.

The blast shredded a large grain silo, devastated neighborhoods near the port and left several city blocks littered with glass and rubble.