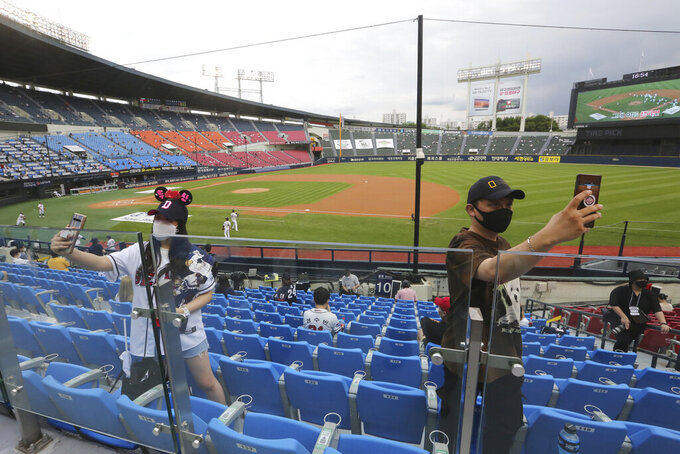 That list was created for players who either test positive for COVID-19 or have been in close contact with an infected person.

Defensive backs Jalen Elliott and Amani Oruwariye and punter Arryn Siposs also went on that list for Detroit, and the Lions put defensive tackle John Atkins on the reserve/opt-out list.

Golladay was Detroit’s leading receiver last season with 65 catches for 1,190 yards and 11 touchdowns. Hockenson had 32 catches for 367 yards and two TDs as a rookie after being drafted on the first round.

Gaby Lopez of Mexico is the first LPGA Tour player to test positive for the coronavirus as the tour returns this week in Ohio for the first time in more than five months.

Lopez, who won the first LPGA event of the year in January, withdrew from LPGA Drive On Championship. She is in self-isolation and working with the LPGA and local health officials on contact tracing.

“I was very excited to get back to playing on tour after this long break, and while I’m disappointed that I’ll have to wait a little longer, I am glad that I was able to get tested and to make sure I do not put anyone else at risk,” Lopez said.

LPGA protocols require the 26-year-old Lopez to quarantine for at least 10 days, after which she will take another saliva test and have a medical evaluation prior to returning.

The LPGA said it would have the rest of the pre-tournament virus test results later this week.

Running back Damien Williams, whose strong postseason helped Kansas City to its first Super Bowl championship in 50 years, is opting out of playing the upcoming season.

The 28-year-old Williams had 290 yards and six touchdowns in three postseason games — two TDs in the Super Bowl — for the Chiefs. He has been plagued by injuries in his six pro seasons, and rushed for 498 yards and five touchdowns on 111 carries during the regular season.

“As an organization, we certainly understand and respect Damien’s choice, knowing it was made in the best interest of his family. He means a lot to our football team as a player and a person, and we’re going to miss having him around this season.”

Teams are not disclosing if players test positive for the coronavirus or are placed in quarantine.

Smith played in 16 games in 2019, his first season with the team. He led the Falcons with eight special teams tackles and forced two fumbles.

The team is not disclosing if any of the players tested positive or were exposed to someone who has been infected with the new coronavirus.

The Atlanta Dream says forward Glory Johnson has been cleared by the team and the WNBA.

The team says Johnson had no symptoms after testing positive for the new coronavirus. She has since received the necessary negative tests to be cleared.

Johnson was expected to be in uniform for Wednesday night’s game against the Las Vegas Aces.

Johnson averaged 7.3 points per game for Dallas in 2019, her seventh season in the WNBA.

Cornerback Caleb Farley says he will not play for Virginia Tech this season because of health concerns and will focus instead on preparing for the 2021 NFL draft.

The redshirt junior from Hickory, North Carolina made the announcement in a video posted on Twitter, joining Illinois running back Ra’Von Bonner and others in choosing not to play. Bonner, who the school indicated was sitting out for personal reasons, told the Chicago Tribune that seeing teammates test positive for COVID-19 during team workout this summer made him rethink the situation.

The 6-foot-2, 207-pound Farley was expected to be one of the nation’s top defensive backs this season. He says he’s forgoing the season “due to uncertain health conditions and regulations and all the other opt outs going on in football right now.”

Farley, whose mother died in January 2018, said he "must make the decision that brings me the most peace.”

Bonner’s decision is supported by teammates and coach Lovie Smith. Hokies coach Justin Fuente was not immediately available to comment on Farley's decision.

Guard Drew Forbes and tackle Drake Dorbeck are the first two Cleveland Browns players who have chosen to opt out for the 2020 NFL season because of the coronavirus.

Forbes, a sixth-round pick in 2019, was expected to compete for the starting right guard job. He appeared in one game for the Browns last season.

Dorbeck is an undrafted rookie out from Southern Mississippi.

Earlier, Browns’ head physician Dr. James Voos said players have the complete support of the team if they decide not to play.

"The NFL and the NFLPA have utilized the CDC criteria for the high-risk category — players that may have a chronic disease, may have a family member with a chronic disease or may have another type of issue that may put them at risk for the season,’′ Voos said. “We have established those criteria to guide the players to make those best-informed decisions for them and their family.”

New York Giants left tackle Nate Solder has opted out of the 2020 NFL season because of the coronavirus pandemic.

Solder, who started every game for the Giants the past two seasons, announced his decision Wednesday on Twitter, citing his son’s ongoing fight with cancer, the recent birth of a baby boy, and his own history with cancer.

Under the agreement reached last week between the NFL and the players’ union, players can choose not to play in 2020 without penalty. The opt-out is irrevocable.

Solder said he made the decision “to pause this season” after much praying. He will earn $350,000 this season as a high-risk opt out. The 32-year-old was scheduled to make $6.5 million under the four-year, $62 million contract he signed in 2018 after leaving the New England Patriots as a free agent. The deal will now run through 2022.

The Big West Conference is postponing all fall sports through the end of the calendar year.

The conference will determine later if conducting fall sports in the spring would be feasible. The decision does not impact basketball, which is scheduled to begin on Nov. 10.

The Division I conference has 11 members, with all but one based in California.

The University of Texas is now exploring how it can host football games at 25% percent stadium capacity instead of the previously announced 50% as the return to campus and the planned start of the season rapidly approaches.

Texas officials had told season ticket holders earlier this month they were planning for 50 percent capacity, which would be allowed under statewide orders from Gov. Greg Abbott. That would include nearly 50,000 fans.

But Austin’s health authority said Tuesday the 50% plan caught the city off guard and he questioned whether the school should host any fans at games. Texas is scheduled to host South Florida on Sept. 5 and the Big 12 has held out hope it can play a 12-game regular season.

In a campus letter Wednesday, Interim President Jay Hartzell said the chairman of the school’s Board of Regents asked the school to plan for a 25% attendance, including students.

The state of Texas has seen record numbers of new coronavirus cases, hospitalizations and deaths in the month of July.

The National Women’s Hockey League is pushing back the start of its season from mid-November to January because of the new coronavirus pandemic.

The league announced Wednesday it still plans to have teams play a full 20-game season, with the playoffs to conclude by the end of March. Should time permit, the NWHL will schedule holding its traditional midseason all-star game after the playoffs.

The NWHL has six teams, with the addition of a Toronto expansion franchise. The league was unable to complete last season, having to cancel the championship game between Boston and Minnesota in mid-March because of COVID-19.

The NWHL plans to begin holding optional practices beginning the week of Sept. 21, followed by formal practices a month later. The schedule was determined by the league’s COVID-19 safety committee formed in April.

The Big 12 will hold its football media day online Monday with only the conference’s 10 head coaches available.

The coronavirus pandemic forced all major college conferences to cancel their traditional in-person football media days and switch to virtual events. The uncertainty of when and if the season will start then prompted the virtual events to be delayed.

The Big 12 will be the first Football Bowl Subdivision conference to conduct a media day, with some of the teams in the conference scheduled to begin play on Aug. 29.

Athletic director Greg Byrne says the University of Alabama has taken cost-cutting measures for each department and sport with the coronavirus threatening fall sports.

In a letter to fans posted Wednesday on the Crimson Tide’s website, Byrne says the athletic department placed a freeze on hiring for non-coaching jobs because of potential revenue shortfalls during the COVID-19 pandemic.

He says Alabama also is finding ways to save on energy and facility operating costs and is reviewing other steps. The Southeastern Conference hasn’t announced plans for fall sports, including football, which could ultimately mean a limited number of fans at Bryant-Denny Stadium.

“In the event we have to adopt a modified seating model at Bryant-Denny Stadium, this number will be impacted significantly. While we don’t yet know the effects on individual ticketholders, we do know that we will need your continued and generous support.”

Spanish soccer club Sevilla says one of its players has tested positive for the coronavirus.

The club has not disclosed the name of the player. It says he has not shown symptoms of COVID-19 and is in good health and isolated at home.

Sevilla says the positive result was discovered on Monday. It immediately informed sports and health authorities and temporarily suspended the team’s training sessions. It also disinfected the club’s facilities in accordance with the strict protocols in place because of the pandemic.

Sevilla is scheduled to face Roma on Aug. 6 in the Europa League.

FIFA has ratified a coronavirus relief plan that will make $1.5 billion available to soccer communities and national associations around the world.

All of the 211 FIFA member associations will receive a $1 million grant “to protect and restart football” and can access interest-free loans of up to $5 million.

Each member association will also receive an additional $500,000 grant for women’s soccer during the plan’s third phase.

The massive spending plan aims to help men’s and women’s professional soccer as well as youth and grassroots soccer through a system of grants and loans.

Each of the six soccer confederations will also receive a grant of $2 million.

FIFA expects to make the funds available by January 2021.

Three riders competing at the Vuelta a Burgos cycling race in Spain have been dropped from the event after being in contact with someone with the coronavirus.

The team says they were in contact with a person who turned out to be positive for COVID-19 on Saturday. They have been isolated and sent home in accordance with protocols by the team and international cycling body UCI.