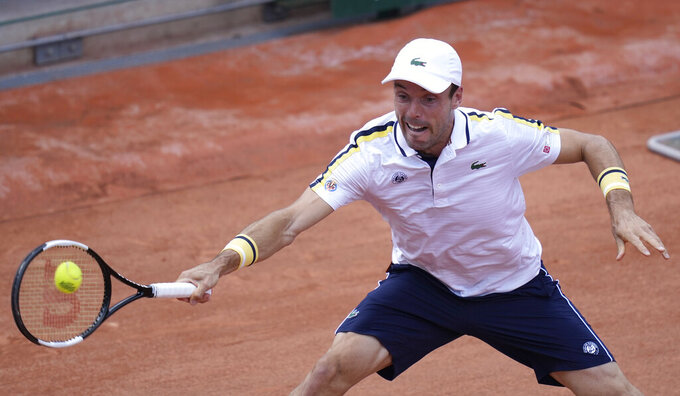 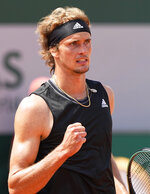 Daniil Medvedev is no longer a pushover at the French Open.

The two-time finalist at hard-court Grand Slam tournaments is finally making some headway on the red clay of Roland Garros. He reached the third round in Paris for the first time by coming back from a poor start to eliminate Tommy Paul of the U.S. by a 3-6, 6-1, 6-4, 6-3 score Wednesday night.

The No. 2-seeded Medvedev carried an 0-4 record at the French Open into this year's draw. But he is 2-0 in Week 1 this time so far.

The runner-up to Rafael Nadal at the 2019 U.S. Open and to Novak Djokovic at the Australian Open this February next plays big-serving American Reilly Opelka, who is seeded 32nd.

French Open organizers say that both members of a men's doubles team have tested positive for COVID-19 and have been dropped from the tournament.

The players were placed in quarantine. The tournament did not identify them.

The first team on the alternate list for men's doubles will get to compete instead.

The French tennis federation said Wednesday night that these were the first two positives from the 2,446 coronavirus tests that have been administered on players and their entourages since the start of qualifying rounds on May 24.

Add Stevie Johnson to the parade of Americans moving into the French Open's third round.

The 31-year-old from California arrived at Roland Garros with an 0-5 record in ATP and Challenger Tour matches this season. Look at him now, though.

That follows his victory over Frances Tiafoe in an all-U.S. matchup in the first round. Johnson dropped the opening two sets of that one before winning it in five.

Johnson will face No. 12 seed Pablo Carreno Busta for a berth in the fourth round. Johnson is 1-8 in third-round play at Grand Slam tournaments with a career-best run to the round of 16 at Wimbledon in 2016.

Serena Williams is back in the third round at the French Open.

At last year's tournament, which was moved to a September start because of the pandemic, Williams retired prior to her second-round match due to an Achilles injury.

Serena Williams has been pushed to a third set against 174th-ranked Mihaela Buzarnescu in the second round of the French Open.

After Williams won the opening set 6-3, Buzarnescu took the second 7-5.

For the third straight year, Stefanos Tsitsipas will be playing in the third round at Roland Garros following another straight-set win Wednesday.

The fifth-seeded Greek player excelled at the net and saved 11 break points to defeat solid baseliner Pedro Martinez of Spain 6-3, 6-4, 6-3.

Tsitsipas achieved his best result in Paris last year when he lost to Novak Djokovic in the semifinals. He arrived in the French capital this year on the back of an excellent clay-court campaign that included titles in Monte Carlo and Lyon.

The former U.S. Open finalist rallied past 23rd-seeded Karen Khachanov 4-6, 6-2, 2-6, 6-4, 6-4 after having also gone the distance to beat Italian qualifier Alessandro Giannessi in the first round.

Khachanov was treated by a trainer in the fifth set after cutting his right middle finger by hitting his racket strings out of anger.

The 29-year-old Swiss had never beaten a Top 20 player before.

Sixth-seeded Alexander Zverev hit 15 aces on his way to the third round at the French Open.

He got there by beating a familiar face. Zverev and Roman Safiullin have known each other since they were 4 years old.

The Russian qualifier put up a good fight but Zverev went for his shots when it mattered and prevailed in straight sets.

Zverev had been pushed to five sets in the previous round against another qualifier.

Tenth-seeded Belinda Bencic's campaign at Roland Garros is over. She lost 6-2, 6-2 to Daria Kasatkina in the second round.

Bencic struggled with her serve throughout and was broken four times by her Russian rival.

The Swiss player has never progressed past the third round at the French Open in five appearances.

Kasatkina made it to the quarterfinals in Paris in 2018 but it's the first time this season that she has won consecutive matches on clay.

Serena Williams resumes her quest for a fourth French Open title against yet another Romanian opponent.

The seventh-seeded Williams plays Mihaela Buzarnescu for a spot in the third round at Roland Garros. It’s their first career meeting.

The 39-year-old American fended off a tough challenge from Irina-Camelia Begu on Monday.

Williams is trying to win a record-equaling 24th Grand Slam title but has played only four matches since the Australian Open.