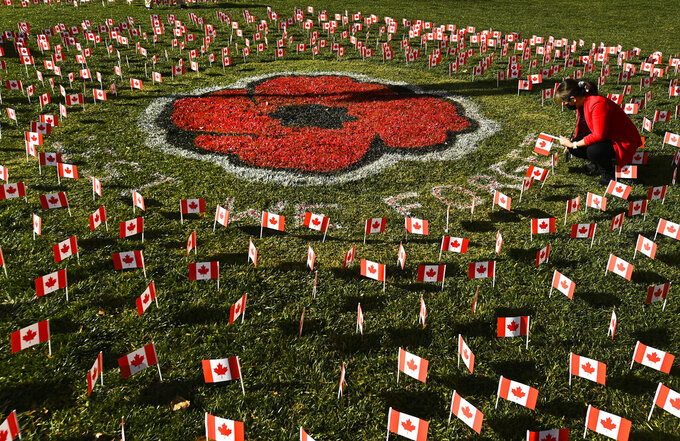 A women places Canadian flags among the 37,500 flags on the eve of Remembrance Day at Sunnybrook Veterans Centre as part of its annual Remembrance Day campaign during the COVID-19 pandemic in Toronto, Tuesday, Nov. 10, 2020. The town declared a state of emergency regarding the issue. (Nathan Denette/The Canadian Press via AP)

MINNEAPOLIS — Minnesota bars and restaurants must stop serving at 10 p.m. and attendance at weddings, funeral and social gatherings will be limited under new restrictions Gov. Tim Walz announced Tuesday to try to slow the accelerating spread of the coronavirus.

The new rules, which take effect Friday, are aimed at young adults, ages 18 to 35, who are often carriers of the virus without showing symptoms and are among the primary spreaders in the state.

While young adults don’t usually get very sick with COVID-19, they can transmit the virus to people who do. The new limits will kick in shortly before college students return home for Thanksgiving, a popular time for reunions with friends.

The new restrictions come after record-setting highs in recent days in new coronavirus cases, hospitalizations, and deaths in Minnesota. The Minnesota Department of Health on Tuesday reported 4,906 new cases to raise the state’s total to 189,681, and 23 new deaths for a total of 2,698.

— US to allow limited supplies of new antibody drug

— Doctors, nurses may be better prepared for US virus surge

— A safe Thanksgiving is possible, though health experts know their advice about avoiding the risks are tough to swallow

SIOUX FALLS, S.D. — South Dakota health officials acknowledged Tuesday that they include intensive care unit beds designed for infants in their total count of hospital beds available in the state — a key metric that the governor has used to defend her handling of the coronavirus pandemic.

COVID-19 hospitalizations reached 607 on Tuesday, marking a new high for the fifth day in a row. The Department of Health reported that about 37% of general-care hospital beds and 32% of ICU beds are available.

He also pointed out that adults could receive medical care in pediatric units if necessary.

Health officials have repeatedly guided people to the Department of Health’s website that tracks the percentage of hospital beds available statewide. Republican Gov. Kristi Noem has insisted the state is doing well by pointing out the percentage of COVID-19 hospitalized patients against total beds.

Hospital systems have scrambled to make beds and space available for COVID-19 patients. But the hospital systems’ capacity also depends on doctors and nurses being available to staff the beds.

ANNAPOLIS, Md. — Hospitalizations from the coronavirus continued to climb in Maryland, as the state reported Tuesday morning that 54 more people were hospitalized compared with the previous day.

The total number of people hospitalized with COVID-19 increased to a total of 761, the highest since June.

Republican Gov. Larry Hogan has scheduled a news conference for 5 p.m. Tuesday. Last week, Hogan warned of a surge. On Monday, he wrote on Twitter that the state has reached a “critical turning point” in the fight against COVID-19.

Meanwhile, the state health department announced the launch of a new app for people with smartphones to receive notification if they might have been exposed to someone who tested positive for the coronavirus.

“MD COVID Alert complements our traditional contact tracing efforts to notify users of possible exposure to help contain the virus,” said Health Secretary Robert Neall. “I encourage Marylanders to use MD COVID Alert to help protect the people around them, including those they might not know directly.”

The app is available at no cost and is voluntary. Users can disable exposure notifications at any time.

NASHVILLE, Tenn. — Tennessee counties that have not required wearing masks in public are on average seeing COVID-19 death rates double or more compared with those that instituted mandates, according to a report released Tuesday.

The Vanderbilt University School of Medicine study focused on three groups of counties: 11 early adopters with mask mandates as of July 10; 17 late adopters with mandates implemented after July 10; and 67 that never adopted a requirement.

Researchers found the early and late adopting groups saw death rates that had been increasing start to drop within a few weeks of implementing requirements, while the group with no requirements continued to see death rate increases.

The early adopters on average had a rate of about 1 death a week per 100,000 people as of the first week in October; late adopters’ death rate was about 2; and the counties without mask mandates had a rate of 4, according to the report.

The analysis comes as new case counts rise in Tennessee, where Republican Gov. Bill Lee has opposed a statewide mask mandate, stressing personal responsibility. He has instead allowed counties to decide whether to require masks.

O’FALLON, Mo. — Twenty-eight employees of the election board in one of Missouri’s largest counties are sick with the coronavirus.

A director believes they most likely got infected from voters, though local health officials aren’t convinced.

Most are doing well and recovering at home, but two part-time workers are hospitalized, including one in intensive care.

Brown says thousands of voters came into the offices to pick up absentee and mail-in ballots, vote, and to drop off ballots.

The employees also worked a drive-thru line for voters with the coronavirus and people in quarantine.

Indiana’s seven-day rolling average for newly confirmed cases rose to 4,490, according to Tuesday’s daily update of the state’s coronavirus dashboard. That is the highest level Indiana has seen during the pandemic.

Indiana’s hospitalizations were also at an all-time high, setting a record for the eighth straight day with 2,336 patients admitted. Of those hospitalized, 599 were in intensive care — the most since April 25.

BISMARCK, N.D. — North Dakota health officials on Tuesday reported 30 new deaths due to complications from the coronavirus, one day after Gov. Doug Burgum announced measures to try to ease stress on the state’s healthcare system.

It is the highest daily death toll since the start of the pandemic and increased the total number of fatalities to 674. North Dakota’s death count per capita has been steadily rising in recent weeks and stood at 10th in the country in statistics compiled Monday by The COVID Tracking Project.

Burgum on Monday announced plans to help ease the crunch on hospitals and staff by allowing workers without symptoms to stay on the job, increasing the number of rapid test systems, canceling some elective surgeries and moving doctors and nurses to where they are needed most.

UNITED NATIONS — The United Nations peacekeeping chief has tested positive for the coronavirus.

Jean-Pierre Lacroix tweeted Tuesday that he was “asymptomatic and isolating in Lisbon, working remotely,” and after his diagnosis “contact tracing was immediately implemented.”

He tested positive while in Europe after visiting peacekeeping missions in Sudan, the Central African Republic and attending meetings in Ethiopia’s capital Addis Ababa.

U.N. spokesman Stephane Dujarric says Lacroix “had been planning to go back to Africa to a number of peace operations and those trips have been postponed.”

MILAN — Italy reported 580 coronavirus deaths on Tuesday, the highest number since April, when the country was under near total lockdown.

Lombardy led with nearly 11,000 new cases. Piedmont, another red zone put under a partial lockdown, had 3,659 cases. The percentage of people testing positive dropped slightly to 16% of tests administered. Nearly 1,000 more people were hospitalized, with 122 more in critical care beds.

Italy has confirmed 42,300 deaths, second only Britain in Europe and sixth in the world.

Spain has confirmed 1.38 million cases, the sixth-highest total in the world. It’s reported 39,756 confirmed deaths, the eighth highest, since the start of the pandemic.

PHOENIX — Arizona has reported 3,434 coronavirus cases, the most in one day since late July.

The state reported 28 more deaths on Tuesday. The daily rolling average for coronavirus-related deaths quadrupled in two weeks, from 6.43 deaths on Oct. 26 to 26 deaths on Monday.

The coronavirus cases reported Tuesday were the most since 3,748 cases on July 25, when Arizona was a national hot spot.

The statewide totals have increased to 263,133 confirmed cases and 6,192 deaths.

OKLAHOMA CITY —State officials reported a record in hospitalizations as the coronavirus surges in Oklahoma.

The Oklahoma State Department of Health registered 1,102 hospitalizations statewide Tuesday and 1,702 new cases. That brings the total number of cases since the start of the pandemic to 140,157.

WASHINGTON — The U.S. government will start Wednesday to distribute the limited supplies of a newly authorized antibody drug for those with mild or moderate COVID-19 in hardest-hit states.

On Monday, the Food and Drug Administration agreed to allow emergency use of Eli Lilly’s experimental drug in non-hospitalized patients while studies continue to determine its safety and effectiveness. The treatment aims to help the immune system clear the virus and is given once through an IV.

The government has spent $375 million to buy 300,000 vials, each containing 700 milligrams of the drug, and says each vial is a treatment course. However, only a dose four times higher proved effective in results revealed so far. Federal scientist Dr. Janet Woodcock said she believes the lower dose still does some good.

The drug is prioritized for people 65 and older or with certain chronic health problems who are at high risk of worsening and requiring hospitalization. At first, the drug will be sent to hospitals and hospital-affiliated locations that are set up to give the infusion.

The drug itself will be free, but the infusion fee is around $300, so Medicare patients will pay 20% of that, or $60, unless they have other insurance covering it. Medicaid will cover the entire cost, along with some other programs.