The Latest: MLB has 4 positive virus tests in past week 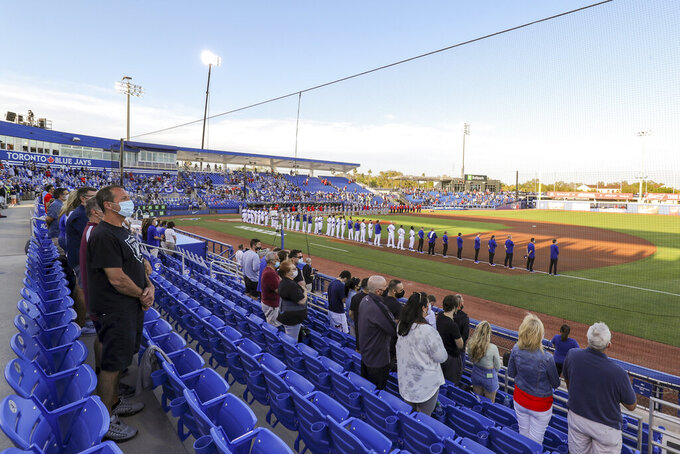 The Los Angeles Angels and Toronto Blue Jays line up for the anthems prior to a baseball game Thursday, April 8, 2021, in Dunedin, Fla. (AP Photo/Mike Carlson)

Major League Baseball had two players and two staff members test positive for the coronavirus over the past week, according to results released by the league and players’ association Friday.

One of the players was on a big league roster and the other participating at an alternate site. The four positive tests were found from 12,494 total tests conducted.

Since the end of intake testing to begin spring training, 25 positive tests have occurred (17 players, eight staff members) out of 99,599 tests — a 0.03% positive rate.

The positive tests this season include at least four among the Nationals, an outbreak that prompted MLB to postpone Washington’s season-opening series against the New York Mets.

The Professional Women’s Hockey Players Association has postponed the Secret Dream Tour Gap showcase in St. Louis this weekend between Team Adidas and Team Women’s Sports Foundation because of “a COVID exposure to one of our teams.”

“We are proud to have successfully navigated back to back events in New York and Chicago, but this serves as a stark reminder of why strict protocols were put in place — to ensure any positive cases were caught before any player or staff member traveled to St. Louis,” said Jayna Hefford, PWHPA Operations Consultant. “We are heartbroken but the PWHPA looks forward to being able to play in front of the St. Louis fans in full health — and full force — at a future date to be determined.”

The NHL’s Capitals and NBA’s Wizards will be allowed to host a limited capacity of 10% fans for games effective immediately after Washington, D.C., approved the teams’ request. Major League Baseball’s Nationals will be able to increase capacity from 5,000 to just over 10,000 fans — 25% capacity.

The Capitals and Wizards were among the few remaining U.S. teams in each league to play home games with no fans in attendance. The next indoor sporting event in the District of Columbia is Tuesday when the Capitals host the Philadelphia Flyers.

A spokeswoman for Monumental Sports & Entertainment, which owns both teams, said they can host up to 2,100 fans. She said further updates are coming Monday.

The possibility of the Toronto Blue Jays playing games this season in Buffalo, New York, has prompted the Triple-A affiliate to temporarily relocate to Trenton, New Jersey.

The Buffalo Bisons announced they will open their season in New Jersey next month while their home field is renovated in anticipation of the Blue Jays’ arrival.

The Blue Jays have opened this season at their spring training home in Dunedin, Florida. Though no date has yet been set, the team plans to shift to Buffalo as early as late May unless it receives approval to resume playing in Toronto.

The upgrades to Buffalo’s Sahlen Field include moving the bullpens off the field to behind the outfield walls, building new batting cages and renovating clubhouse and weight room facilities to meet Major League Baseball standards.

The Blue Jays played a majority of home games in Buffalo last year after Canadian health officials denied the team’s request to play in Toronto because of cross-border travel restrictions stemming from the pandemic.