The Latest: Montana meth use up in first months of pandemic 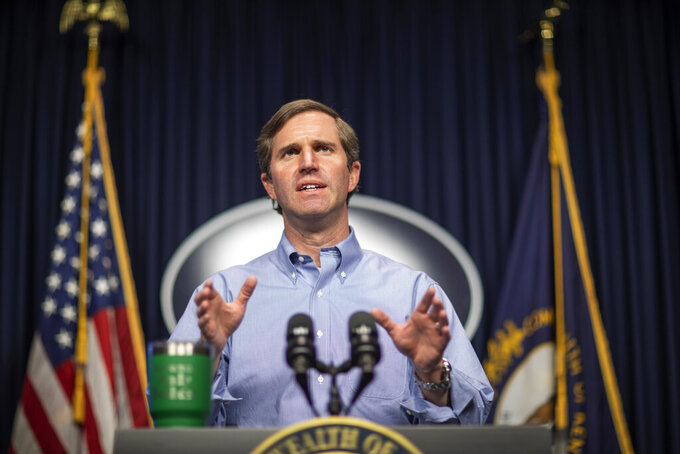 FILE - In this Monday, May 11, 2020, file photo, Kentucky Gov. Andy Beshear speaks during a news conference at the state Capitol in Frankfort, Ky., to provide an update on the coronavirus situation. Kentucky voters concerned about being at risk of contracting the coronavirus will be able to cast mail-in ballots under a bipartisan agreement reached by Beshear and Secretary of State Michael Adams. (Ryan C. Hermens/Lexington Herald-Leader via AP, File)

MISSOULA, Mont. -- Laboratory results and law enforcement reports indicate methamphetamine use increased in Montana during the first months of the coronavirus pandemic.

The Missoulian reports Millennium Health found a 34% increase in urine samples testing positive for methamphetamine after President Donald Trump declared a national emergency March 13. The company compared results from Jan. 1 through March 12 with results from March 13 through May 31.

In Montana’s Yellowstone County, law enforcement tied increased meth use to violent crime. The county experience a 21% increase in homicides, robberies and aggravated assaults from March through July compared to that period in 2019.

— Scientists are still trying to determine whether coronavirus antibodies shield someone from getting infected again and medical experts warn tests that check for them cannot be safely used to return workers to the office.

— A teacher in Nigeria has helped students across the country, and internationally, learn math virtually during coronavirus restrictions.

But health officials across the state were waiting to see if the Labor Day weekend might produce an uptick in the number of coronavirus cases, as might have been the case following the Fourth of July holiday — when the largest single-day surge in new cases was reported about a week later.

The latest state data released by the Florida Health Department reflected 22 new deaths. That pushed down the average number of deaths over the past week to 99 a day — the lowest average since July 16. In all, the state has tallied 12,023 deaths linked to the virus since the outbreak began.

State officials said there were 3,160 people in hospitals with a primary diagnosis of COVID-19.

THESSALONIKI, Greece — A prosecutor in the northern Greek city of Thessaloniki has ordered the police electronic crime squad to identify the organizers of a weekend anti-mask protest and investigate whether they should be prosecuted for incitement to a criminal act.

Monday’s decision came a day after some 2,500 people protested peacefully in Thessaloniki in a gathering organized on social media.

Demonstrators were strongly protesting the government’s decision for obligatory use of masks by schoolchildren when term starts again on Sept. 14, but also expressed opposition to the future use of a vaccine against COVID-19, as well as to compulsory tests for the disease.

Participants in Sunday’s demonstration had included a child carrying a placard that read “I won’t wear a muzzle.”

LOUISVILLE, Ky. — A Kentucky state representative announced that she has tested positive for the coronavirus.

The Courier-Journal reported that State Rep. Attica Scott, a Louisville Democrat, said in a video posted to social media that she took the test last week and got the results back on Sunday.

Beshear said the 4,742 confirmed cases for the week ending Sunday topped the record 4,503 cases from the previous week.

The changes are a response to a recent increase in positive cases among students and a concern that cases may increase even more following reports of parties over the holiday weekend where groups should have been in quarantine.

MADRID — Fueled by a sharp surge of coronavirus contagion just as the school year opens, Spain has now officially more than half a million confirmed coronavirus cases since the beginning of the pandemic.

The health ministry on Monday reported 26,560 new infections since its last report on Friday, or an average of 8,800 daily, bringing the total since February to 525,549. Most new cases show new symptoms and the spike is so far not overwhelming hospitals.

During the same period 29,516 people have died in Spain with the new coronavirus, although the real death toll is believed to be much higher given insufficient testing in March and April.

ROME — The number of new COVID-19 cases in the last 24 hours dropped by nearly 200 in Italy, but the number of tests performed plunged to the lowest in two weeks.

Italy’s high number of tests lately largely reflected tens of thousands of vacationers who underwent testing at airports or seaports, many of them returning from vacations in places where clusters of infections were detected.

Now, that influx of travelers is dwindling as families get ready for schools to reopen.

The Health Ministry reported that Italy’s total number of confirmed coronavirus infections stood at 278,784, with the addition of 1,108 on Monday. There were 12 deaths since the previous day, raising to 35,535 the toll of known dead in the pandemic in Italy.

Daily caseloads have been rising for five weeks now, after steadily dropping at the start of summer.

As of Monday, 142 COVID-19 patients occupied ICU beds. That’s about 100 more than in late July. But the first weeks of the pandemic saw that number top 4,000, and many hospitals, especially in northern Italy which bore the brunt of the outbreak, were overwhelmed.

GENEVA — As school resumes for millions of children, the World Health Organization is appealing for people not to stigmatize kids who come down with COVID-19 or their families.

WHO emergencies chief Dr. Michael Ryan said Monday that anyone can get this disease.

Ryan alluded to concerns and anxieties felt by many parents if their child were to contract the coronavirus, fearing they might become “pariahs” if the child’s illness leads to the entire class being sent home. He emphasized that schools, too, should not be left alone — and that public health authorities should work with them.

Depending on local conditions, Ryan said it’s important that public health authorities explain “what’s going to happen next” if an incident, case or cluster turns up in a school setting. And communities mustn’t rush to judge.

JERUSALEM — Israeli Prime Minister Benjamin Netanyahu says he has delayed plans to impose overnight curfews in 40 cities and towns hit hard by the coronavirus by 24 hours in order to “consult” with the communities.

In a news conference Monday, Netanyahu said the curfews will now go into effect on Tuesday night at 7 p.m. and last until 5 a.m.

The government has been forced to take action after failing to contain an outbreak that has claimed more than 1,000 lives and remains at record levels of new infections.

Netanyahu announced the curfew plan on Sunday but decided against full lockdowns after an uproar by politically powerful religious leaders. Many of the hardest-hit communities are home to ultra-Orthodox populations.

The outbreak has raised fears of a nationwide lockdown during the upcoming Jewish New Year.

GENEVA — The head of emergencies at the World Health Organization says governments that provide “politically motivated” information about the coronavirus pandemic could face a political backlash.

Dr. Michael Ryan said Monday that “trying to present oversimplified, simplistic solutions for people is not a long-term strategy that wins.” He told reporters in Geneva that “transparency, consistency, honesty” and admitting errors can build trust.

Ryan was speaking in general terms after being asked about conflicting messages sent by the Brazilian government over its COVID-19 response.

Ryan says coronavirus-related messages sometimes come with “political overtones” and he alluded to a saying that trust takes years to build but seconds to lose.

He says: “If communities perceive that they’re getting information that is being politically manipulated or that it has been managed in a way that is distorting evidence, then unfortunately that comes back to roost.”

ROME — A doctor says the clinical condition of former Italian Premier Silvio Berlusconi is starting to improve after he was hospitalized with pneumonia and COVID-19 last week.

Dr. Alberto Zangrillo, Berlusconi’s long-time personal doctor, said in a statement Monday that the 83-year-old media mogul, who has a history of heart problems, has pneumonia in both lungs. Zangrillo says Berlusconi’s overall condition “appears to be improving” and that his body has mounted “a specific robust immune response” associated with a reduction in inflammation.

Zangrillo heads the intensive care unit at San Raffaele hospital in Milan, but he has stressed that Berlusconi isn’t in intensive care but in isolation elsewhere in the hospital.

Zangrillo said last week that Berlusconi’s advanced age and his history of medical problems make him particularly vulnerable to the dangers of coronavirus infection.

PARIS — Doctors have raised the alarm that nearly all the intensive care beds reserved for COVID-19 patients are in use in and around France’s second city of Marseille.

The Marseille Hospitals Medical Commission President Dominique Rossi told BFMTV on Monday that of the 70 designated intensive care beds in the Bouches-du-Rhone region, “between 65 and 67” are currently occupied.

New daily infections in France have averaged over 5,000 in recent days, raising fears of a second wave of the virus.

Rossi tweeted that the situation is tense, but that it isn’t as bad as at the height of the first wave, when the Bouches-du-Rhône department had up to 270 COVID-19 patients in intensive care.

Professor Lionel Velly, of the anesthesia-intensive care unit at Marseille’s La Timone hospital, says he fears there will soon be no more beds to accommodate the sick in Bouches-du-Rhône.

COPENHAGEN, Denmark — Danish Health Minister Magnus Heunicke says authorities have reduced the number of people who can gather in greater Copenhagen from 100 to 50.

Heunicke said Monday that the restriction is imposed with immediate effect in the Danish capital and its suburbs, and Odense, Denmark’s third largest city.

He says 230 new cases have been recorded since Sunday and that the number of infections is “the most worrying situation ... since the spring.”

Overall, Denmark has reported 18,113 cases and 628 deaths. Most of the new cases were recorded in private homes and among young people.

TEL AVIV, Israel — Israeli demonstrators have placed more than 1,000 empty chairs in a central Tel Aviv square in an eerie display symbolizing the local lives claimed by the coronavirus.

A red rose was laid on each empty chair Monday with black and white signs representing those killed by the virus.

The surge in cases has raised concerns that the country could be forced to declare a nationwide lockdown during the upcoming holiday period, a time of widespread travel and large family gatherings.

On Sunday, Israeli Prime Minister Benjamin Netanyahu announced overnight curfews in some 40 cities and towns hit hard by the coronavirus. But he backed away from reported recommendations for full lockdowns after an uproar by politically powerful religious politicians.

AMSTERDAM — The coronavirus pandemic has proved to be the worst of times for an annual Dutch celebration of the works of 19th century British author Charles Dickens.

Organizers said Monday that this year’s edition of the Dickens Festival, which was to have been staged in December in the eastern town of Deventer, has been canceled.

Organizers say it would be impossible for visitors — and performers who dress up as Dickens characters during the two-day festival —- to observe social distancing guidelines in Deventer’s narrow streets.

The event draws more than 100,000 visitors to the town each year.

Doctors who treated 45-year-old Grzegorz Lipinski said Monday that the double transplant was the only way to save him after the virus almost totally his lungs.

Lipinski is head of the medical instruments sterilization room at a hospital in Tychy, southern Poland, that only treats COVID-19 patients. He was initially treated there then was moved to the University Hospital in Krakow, where he was put on the ExtraCorporeal Membrane Oxygenation, which is a system that performs the functions of the lungs.

He had the double transplant at the Silesia Center of Heart Diseases in Zabrze in July. Professor Marian Zembala, the center’s chief, says Lipinski is due to go home Tuesday.