The Latest: Nevada to open vaccination to everyone over 16 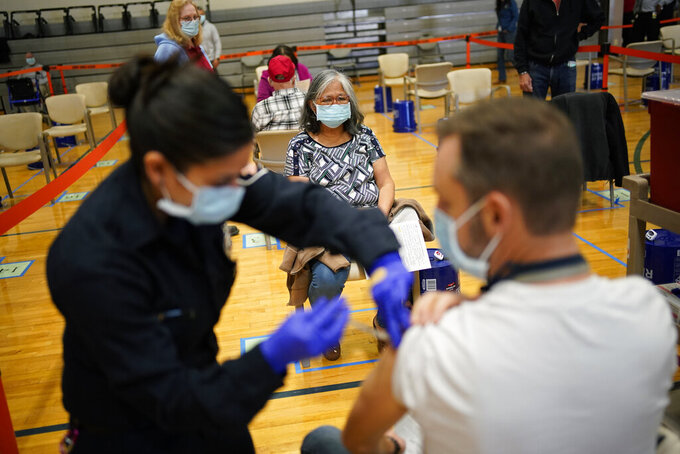 FILE - In this Feb. 17, 2021, file photo, people receive the COVID-19 vaccine at a vaccination site in Las Vegas. Nevada's top coronavirus official didn't guarantee the state can meet President Joe Biden's goal of offering a vaccination to every adult who wants a shot by May 1, but said it gives everyone something to work toward. COVID-19 Task Force chief Caleb Cage said everything depends on vaccine allocations. Seventeen new COVID-19 deaths were reported statewide Friday, March 12, 2021, bringing the pandemic total in Nevada to almost 5,100. (AP Photo/John Locher, File)

CARSON CITY, Nev. — Nevada is making all residents ages 16 and older eligible for the coronavirus vaccine starting April 5 as part of its efforts to inoculate the population as quickly as possible.

The timeline will make vaccines appointments available in the coming weeks to hundreds of thousands more people in Nevada, where roughly 61% of the population is older than 18 and younger than 65.

The decision satisfies President Joe Biden’s goal to have everyone 18 years and older eligible for vaccines by May 1 in all states.

CASES: The seven-day rolling average for daily new cases across the world rose over the past two weeks from 377,773.6 on March 2 to 438,497.9 on Tuesday according to Johns Hopkins University

DEATHS: The seven-day rolling average for daily new deaths across the world did not increase over the past two weeks, going from 9,067.4 on March 2 to 8,578.3 on Tuesday, according to Johns Hopkins University.

CASES: The seven-day rolling average for daily new cases in the U.S. did not increase over the past two weeks, going from 65,396.7 on March 2 to 54,744.6 on Tuesday, according to data from Johns Hopkins University.

DEATHS: The seven-day rolling average for daily new deaths in the U.S. did not increase over the past two weeks, going from 1,944.4 on March 2 to 1,284.9 Tuesday, according to Johns Hopkins University.

NEW YORK — New York state will lift its pandemic curfew next month for casinos, movie theaters and some other establishments, but closing time will still be 11 p.m. for bars and restaurants.

New York has one of the highest rates of new cases per person of any state, and cases and deaths aren’t declining as quickly as in the nation as a whole.

But the governor said that as a growing number of New Yorkers get vaccinated, “we are reaching the light at the end of the tunnel.”

Cuomo on Wednesday became one of the roughly 4.7 million New Yorkers who have gotten at least one dose of coronavirus vaccine.

OKLAHOMA CITY — Health officials for the Muscogee (Creek) Nation and the federal Indian Health Service plan to provide 4,000 coronavirus vaccinations to Native Americans and members of their households during a two-day clinic in Tulsa, Oklahoma.

Officials said Wednesday that any member of a federally recognized tribe as well as members of their households, whether tribal members are not, are eligible for an appointment to receive the vaccine.

About 21,000 of the Creek nation’s estimated 65,000 Oklahoma citizens have received at least one vaccine dose and the clinic is an effort to reach out to a larger population of Native Americans.

FLAGSTAFF, Ariz. -- The Navajo Nation Gaming Enterprise is planning to reopen two of its casinos this week with reduced capacity.

The casinos in northwestern New Mexico near Gallup and Farmington will open Friday after being closed for a year amid the coronavirus pandemic.

The move comes as the tribe eases its restrictions on businesses and sees a downward swing in COVID-19 cases and deaths.

The casinos will operate at 25% capacity, with no food or drink services, and only residents of the reservation will be allowed in.

The enterprise will keep two other casinos east of Flagstaff and in northwestern New Mexico closed in the meantime.

CHICAGO — Officials in Chicago say the city will expand coronavirus vaccine eligibility later this month to include people with underlying health conditions and more categories of workers including in food service, construction, retail, finance and higher education.

It is the last category before vaccines will be available to the general public.

The state of Illinois has already allowed people with some underlying health conditions and more essential workers to receive the shots, but Chicago and its surrounding counties have held off expanding eligibility because of limited supplies and difficulties in getting appointments.

The Indigenous community has been able to vaccinate the majority of its members and will use additional funding in the coming months to help with continued vaccine efforts for the broader community and other programs.

The pueblo’s health center has the capability of vaccinating about 200 people a day. Harris’ husband, Doug Emhoff, called the clinic a model.

MADRID — Spain’s health minister has defended the decision taken by her government and other European countries to put a hold on the AstraZeneca vaccine, saying it is necessary to “continue building confidence” in the continent’s COVID-19 vaccination efforts.

Health Minister Carolina Darias said that she would be closely watching on Thursday when the European Medicines Agency (EMA) releases the initial results of its investigations into whether there is a connection between the vaccine and the blood clots.

Spain has detected three cases of people who had adverse reactions after receiving the AstraZeneca shot.

“We hope that tomorrow the decision of the EMA allows us to continue building confidence,” Darias said. “I believe it was the best decision to ensure that the vaccination program can move forward in a coordinated fashion... I understand the concern, but I also want to stress that in our country we are talking about three people of more than 980,000 who have received the vaccine.”

Spain has been very conservative in its use of AstraZeneca, limiting it to people 55 years and younger despite calls from some regions and doctors to include older groups.

BOISE, Idaho — The top member in the Idaho House on Wednesday said he’s concerned the Legislature might have to shut down if House members continue getting sick with COVID-19.

Republican House Speaker Scott Bedke said he’s asked House members to take precautions so that the Legislature can remain in session and wrap up business by March 26.

Three House members are currently out with COVID-19. All are Republicans who tend to rarely wear masks.

Two Republican senators, Steve Bair and Van Burtenshaw, have each been out with COVID-19 but are back in the Senate.

The Legislature has significant unfinished business, including approving budgets, a bill with a large tax cut, and multiple pieces of legislation aimed at limiting a governor’s powers during an emergency declaration.

WASHINGTON — The Centers for Disease Control and Prevention is releasing new guidance on coronavirus testing to give local health departments, school districts and others a better idea of how to effectively use various kinds of tests under different circumstances, whether screening groups of people or trying to diagnose an individual.

CDC Director Dr. Rochelle Walensky said Wednesday the latest guidance also includes a detailed discussion of how testing can advance the goal of reducing racial and ethnic disparities in the pandemic, which has taken a disproportionately high toll among Blacks, Latinos, and Native Americans.

The CDC acted as the Biden administration announced $10 billion in funding for states to expand COVID-19 testing in schools, as part of its push to get more schools open five days a week before the end of the school year.

Testing has been a chronic problem in the U.S. dating to the earliest days of the pandemic. Ideally, testing can be used to identify outbreaks early and contain them before entire communities are affected. But the latest figures show the volume of testing in the U.S. has been going down.

LONDON — Public health officials in England say the number of people getting their first dose of the COVID-19 vaccine will be “significantly constrained” from April because of a reduction in the vaccine supply to the country.

A letter to regional health leaders said they should expect a “significant reduction in weekly supply available from manufacturers” beginning from the week of March 29. The reduction will continue for four weeks, it said.

When asked about the issue, Health Secretary Matt Hancock said Wednesday that supply was “always lumpy.” He added that the supply from the European Union is “fulfilling contractual responsibilities and we fully expect those contracts to be delivered on.”

He did not explain whether the expected supply reductions is related to the EU chief’s warning Wednesday that the bloc would not hesitate to take action - including possible export restrictions - to ensure it receives the reliable supply of vaccines it was promised. The U.K. is on track to offer a first dose to all those in the top priority groups by mid-April, Hancock added.

WASHINGTON — The Biden administration is working to make a leading COVID-19 therapy available to even more Americans.

Dr. Marcela Nunez-Smith, the White House COVID-19 equity task force chair, says the administration is spending $150 million to broaden access to monoclonal antibodies. When administered early in the course of infection, the treatments can dramatically reduce serious illness or hospitalization.

Nunez-Smith says the treatments are available in 5,000 locations across the country already, with more locations — particularly in hard-hit communities to follow in the coming weeks.

The administration is also increasing its outreach to caregivers to encourage them to utilize the therapies to prevent deaths and hospitalizations.

ANCHORAGE, Alaska — The Alaska Department of Corrections is allowing attorney-client visits to resume within its facilities after a yearlong suspension related to the COVID-19 pandemic.

The department says visits can resume starting Wednesday, with limits. For example, the person who is imprisoned must be fully vaccinated and attorneys will be subject to screening, including temperature checks.

Face coverings and appointments will be required. Alaska Public Media reports that for the past year, those in the department’s custody have had to rely on phone calls from lawyers to discuss their cases.

The Centers for Disease Control and Prevention’s report, released Wednesday, indicates 31 states are failing to meet the goal. In contrast, Arizona and Montana are achieving equity in vaccine coverage, directing vaccines to counties with more economic and social disadvantages. Three other states – Alaska, Minnesota and West Virginia – are doing fairly well by that measure, the report said.

The CDC looked county-by-county at the proportion of people getting at least one dose of vaccine. Coverage was lower in counties with more economic and social disadvantages as measured by the CDC’s social vulnerability index. That’s a measure combining factors such as poverty, education, crowded housing and racial and ethnic minority population.

The CDC analyzed vaccine coverage through March 1 and included data representing 49.2 million people who had at least one dose. Hawaii did not systematically report county of residence, so the state was omitted from the analysis.

WASHINGTON — Federal health officials are actively looking at studies on physical distancing in schools and will update its 6-feet guidance when it has “concise and consistent evidence,” the head of the Centers for Disease Control and Prevention said Wednesday.

Rochelle Walensky, the agency’s director, said during a congressional hearing that studies looking at distancing of 3 feet in schools got underway after it became clear that the agency’s 6-feet distancing recommendation would be difficult.

“Whenever there are challenges, that’s when science emerges,” she said.

So far, Walensky noted there has only been one published study indicating students with masks can be seated as close as 3 feet apart, without increasing the risk of infection. But she noted other studies have been in progress.