The Latest: New effort to drop 'Plantations' from R.I. name 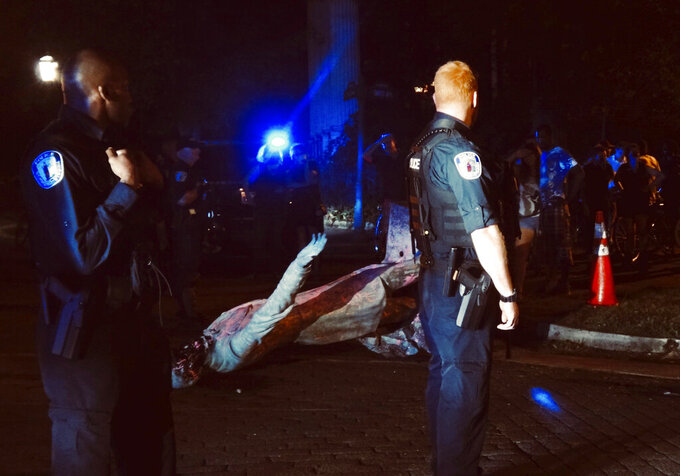 In this photo provided by @thicketoftrash, a police officer looks toward the toppled statue of Confederate President Jefferson Davis along Monument Avenue, Wednesday night, June 10, 2020, in Richmond, Va. (@thicketoftrash via AP)

— Clemson U. to strip name of pro-slavery vice president from honors college.

PROVIDENCE, R.I. — The smallest U.S. state has the longest name, and it’s not sitting well with some in the George Floyd era.

Officially, Rhode Island was incorporated as The State of Rhode Island and Providence Plantations when it declared statehood in 1790. Now, opponents have revived an effort to lop off the plantations reference, saying it evokes the legacy of slavery.

An online petition aims to ask the state to shorten the name to just Rhode Island, a nonbinding campaign intended to generate momentum toward an eventual ballot question this November.

“In no way am I trying to erase history. But we shouldn’t glorify our shameful past,” Tyson Pianka, a University of Rhode Island sophomore who organized the petition drive, said in an interview.

Name alterations have been attempted before — most recently in 2010, when nearly eight in 10 voters rejected the shorter name in a referendum. But supporters say they’re feeling a fresh sense of urgency and determination as the nation reckons with Floyd’s death. About 60% of all slave-trading voyages launched from North America came from Rhode Island, researchers say.

ANNAPOLIS, Md. — Support is growing to remove a plaque from Maryland’s Capitol that honors the Civil War’s Union and Confederate soldiers from the state and once showed a Confederate flag that has been covered over.

House Speaker Adrienne Jones renewed her push to have the plaque removed in a letter Thursday. Last year, a four-member panel that oversees the Capitol and its grounds voted to cover a logo from the sign showing the U.S. and Confederate flags crossed. It was covered with an image of the Maryland state flag, but the sign remained after a 3-1 vote.

Jones, who is Maryland’s first black House speaker, wrote that the plaque “is not a symbol that belongs in our seat of government.”

“The language of this plaque still remains which sympathizes with the Confederacy,” Jones wrote. “The past two weeks have reignited our national conversation about the systemic racial injustice that continues throughout the United States of America.”

DOVER, Del. — A memorial honoring Delaware law enforcement officers who have died in the line of duty was damaged with an ax, authorities said Friday.

Dover police received a call shortly after 5:30 a.m. Friday by a passerby who reported that a person was vandalizing the memorial on Legislative Mall.

A bronze statute of a police officer kneeling in reverence in front of a granite wall inscribed with the names of fallen police officers was damaged, and two urine-soaked state flags were placed on the ground. An ax was left there.

The university’s board also publicly requested permission from the state legislature to change the name of Tillman Hall back to its original name, the Main building. The iconic campus building currently honors “Pitchfork” Ben Tillman, the governor and U.S. senator who used virulent racism to dominate South Carolina politics after Reconstruction.

Other than removing the Confederate flag from state House grounds after a deadly attack on nine black Charleston church members in 2015, lawmakers have refused to take up any major changes of Confederate monuments. Change requires a two-thirds vote of both the House and Senate.

Trustees cited the recent death of George Floyd in Minneapolis, which has spurred protests over racial injustice and police brutality across the country, as an impetus for the renaming. The honors program will now be called the “Clemson University Honors College.”

Calhoun, who was born in South Carolina, declared slavery a “positive good” on the U.S. Senate floor in 1837. Tillman led a white mob in 1876 that killed several black men in Hamburg, an Aiken County town where freed slaves had settled.

Following recent protests over racial injustice and police brutality, activists have renewed calls to remove monuments and rename buildings honoring the Confederacy, slavery and white supremacy across the state.

Clemson’s honors college was established in 1962 and named after Calhoun in 1981, and the university maintains Calhoun’s plantation home Fort Hill on campus.

VIERA, Fla. — The president of a police union in Florida has resigned after a social media post that encouraged officers linked to departments accused of using excessive force to apply for jobs.

Brevard County Sheriff Wayne Ivey said Friday that Lt. Bert Gamin was no longer with the agency. Gamin had been told he would be fired after an internal investigation of his conduct.

The message was posted last week on the Brevard Fraternal Order of Police Facebook page. It read, “Hey Buffalo 57 ... and Atlanta 6 ... we are hiring in Florida. Lower taxes, no spineless leadership or dumb mayors rambling on at press conferences ... Plus ... we got your back!” It ended with the hashtags “lawandorderflorida” and “movetowhereyouare.”

CANBERRA, Australia — Australia’s prime minister apologized Friday to those who accused him of denying the country’s history of slavery.

Morrison had defended the legacy of British explorer James Cook, who in 1770 charted the site of the first British penal colony in Australia, which became present-day Sydney. He told Sydney Radio 2BC, “While slave ships continued to travel around the world, when Australia was established ... it was a pretty brutal place, but there was no slavery in Australia.”

Morrison says his comments were “not intended to cause offense and if I did, I deeply regret that and apologize for that.” He added slavery was not lawful in the original Sydney colony.

The announcement came after a statue of the monarch, who forced many people into slavery in the Congo, was defaced and removed from the Belgium city of Antwerp.

GAINESVILLE, Fla. — The University of Florida has rescinded an admission offer to a prospective student who posted a racial comment on social media.

Florida’s flagship university tweeted this week that the prospective student “will not be joining the University of Florida community this fall.” The tweet didn’t offer details.

The Gainesville Sun reports that University of Florida officials have been looking into allegations of prospective and enrolled students posting racist messages on social media. Their concerns come as protests have been held across the nation in response to the death of George Floyd at the hands of police officers in Minneapolis.

Last week, the University of Florida tweeted that it was looking into racist or threatening posts made by students.

RICHMOND, Va. — A statue honoring police officers killed in the line of duty was removed from a park in Virginia’s capital city on Thursday after it was covered in red paint.

Video obtained by news outlets showed a truck hauling the Richmond Police Memorial away from Byrd Park, the same place where a statue of Christopher Columbus was torn down, set on fire and thrown into a lake on Wednesday.

The bronze memorial arrived in 2016 and lists the names of 39 fallen Richmond police officers.

The police memorial will be restored and “returned to public display,” according to WRIC-TV, which quoted a spokesman for Mayor Levar Stoney.

MINNEAPOLIS — A man who said George Floyd had previously “bumped heads” with the police officer charged in his death has recanted his story. CBS News reports David Pinney says he was mistaken.

Pinney told the network earlier this week that Floyd and officer Derek Chauvin had known each other at the nightclub where they both worked security and they had a tense relationship. Minnesota Attorney General Keith Ellison subsequently said investigators were looking into the report.

Pinney told CBS News he had confused Floyd with someone else.

The nightclub’s owner last month told The Associated Press that Floyd and Chauvin had both worked security at her club, but she wasn’t sure whether they knew each other.

BERLIN — German Chancellor Angela Merkel has weighed in on a debate over whether to remove the word ‘race’ from Germany’s constitution, after some lawmakers and activists said using the term supports the discredited notion of separate human races.

Merkel’s spokesman Steffen Seibert says “the chancellor is open to such a debate” and the views from both sides were “thought provoking.”

Article 3 of the German constitution states that “no person shall be favoured or disfavoured because of sex, parentage, race, language, homeland and origin, faith or religious or political opinions.”

Seibert says the authors of Germany’s post-war constitution had sought to “send a very clear signal in 1949” by explicitly forbidding discrimination based on race because of the experiences of the Nazi period.

The Nazis’ systematic persecution and murder of millions of Jews, Roma, Poles and others from 1933-45 was rooted in an ideology of supposed Aryan racial superiority.

Seibert added “removing or not removing a term might not solve the problem” of racism.

ROTTERDAM, Netherlands — Dutch activists have spray painted the words “killer” and “thief” and daubed red paint on a statue of a man from the 17th-century Golden Era of Dutch trade and colonial expansion.

A municipal worker was removing the paint from the statue of Piet Hein in Rotterdam on Friday, amid a wave of vandalism on statues of historical figures in the United States and Europe.

Hein is best known for leading a Dutch naval action in 1628 that captured a Spanish treasure fleet near Cuba. A group calling itself “Heroes of Never” in Dutch claimed responsibility, saying in a statement Hein was “a key figure in clearing the way for trans-Atlantic human trade in enslaved West Africans.”

The death of George Floyd at the hands of Minneapolis police officers has sparked a re-examination of the actions of historical men, who often were exalted in the form of statues and other memorials.

SYDNEY — Hundreds of police have disrupted plans for a Black Lives Matter rally in downtown Sydney, but protest organizers have vowed that other rallies will continue around Australia over the weekend despite warnings of the coronavirus risk.

Police ringed the Sydney Town Hall hours before around 3,000 people were expected to attend a rally on Friday following the death in Minnesota of George Floyd.

Police vans were parked in side streets in preparation for mass arrests for breaching a 10-person limit on public gatherings. Protesters instead split, and 100 dispersed around the hall while another few hundred converged on a nearby park.

The protesters all appeared to obey police directions to leave. Prime Minister Scott Morrison has urged police to charge protesters with breaching pandemic restrictions this weekend.

Rallies are planned in various cities this weekend about the Minnesota death of George Floyd and the coronavirus risk posed to asylum-seekers held in crowded Australian immigration detention centers.

LONDON — Authorities in London have boarded up a war memorial and a statue of wartime Prime Minister Winston Churchill ahead of expected rival demonstrations by anti-racism and far-right protesters.

Monuments have become major focuses of contention in demonstrations sparked by the death of George Floyd at the hands of Minneapolis police. A statue of slave trader Edward Colston was dumped in the harbor by protesters in the English port city of Bristol on Sunday.

Several other statues have been defaced around the country. Police are concerned far-right groups plan to seek confrontation under the guise of protecting statues.

With more demonstrations expected on the weekend, a protective plywood screen was erected around Churchill’s statue outside Parliament. Authorities also fenced off the nearby Cenotaph, a memorial to Britain’s war dead.

A Black Lives Matter group in London said it was calling off a planned protest on Saturday because the presence of far-right activists would make it unsafe. Another anti-racism protest Friday is set to go ahead.

BERLIN — Police in eastern Germany have suspended two officers who filmed themselves harassing a homeless man.

A 90-second video on social media of Sunday’s incident in Bad Belzig, southwest of Berlin, showed one of the officers shoving the inebriated man and trying to kick him.

Police in Brandenburg state say the two officers have been suspended and face a criminal investigation and disciplinary proceedings.