The Latest: NHL says Tomas Nosek of Vegas out with COVID 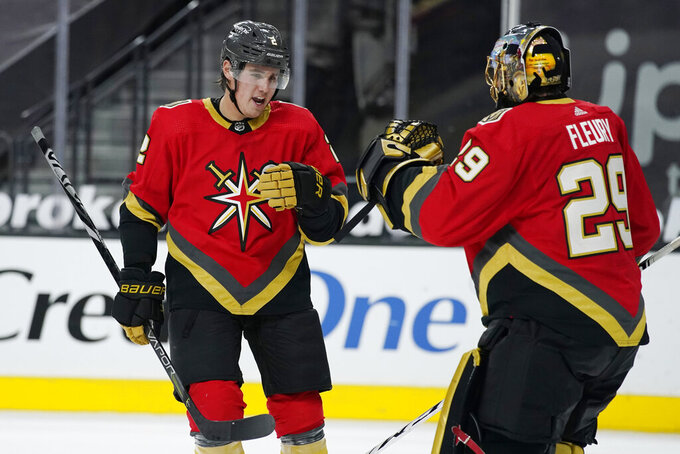 The NHL says Vegas Golden Knights forward Tomas Nosek has tested positive for COVID-19 after he was removed from playing in a 5-4 win over Anaheim on Tuesday night.

Nosek has been placed in isolation and the league is conducting close-contact tracing. The NHL says the Golden Knights home game against the Ducks remains scheduled for Thursday, pending test results of players and staff on both teams.

Nosek’s positive test led to the Golden Knights canceling practice on Wednesday after the team did not make anyone available for video interviews following the game.

In other coronavirus pandemic developments, Minnesota forward Victor Rask was added to the NHL’s COVID-19 list. The Wild now have 13 players on the list, with their games postponed through at least Saturday.

New Jersey’s count of players on the list is down to 17 after forwards Kyle Palmieri and Pavel Zacha were removed. Also removed from the list was Chicago Blackhawks forward Lucas Wallmark.

The Atlantic Coast Conference announced Wednesday that the Virginia Tech at Boston College women’s basketball game scheduled for Sunday has been postponed.

Boston College remains in COVID protocols, which caused the postponement, and is following ACC health protocols.

A makeup date was not given.

Western Illinois’ football season opener at South Dakota has been postponed because of COVID-19 issues in the WIU program.

The teams were scheduled to meet in Vermillion, South Dakota, on Feb. 19. The game was rescheduled for April 17 at the DakotaDome.

Western Illinois plays in the Championship Subdivision Missouri Valley Conference, which postponed its football season last fall because of the COVID-19 pandemic. Each team is playing eight games this spring.

The University of Hartford has become the third women’s basketball program in the America East Conference to end its season early.

Head coach Morgan Valley said the decision was made at a team meeting on Wednesday.

“With multiple quarantines, shut downs, missed holidays, cancelled/rescheduled games and many unknowns, we decided that this is the best path forward for our program at this point in time,” Valley said in a statement.

The team, which played only conference games this season, finished 3-9.

The other two America East women's teams that have stopped their seasons are Vermont and UMBC.