The Latest: No. 2 Baylor hoops makes surprise trip to Vegas 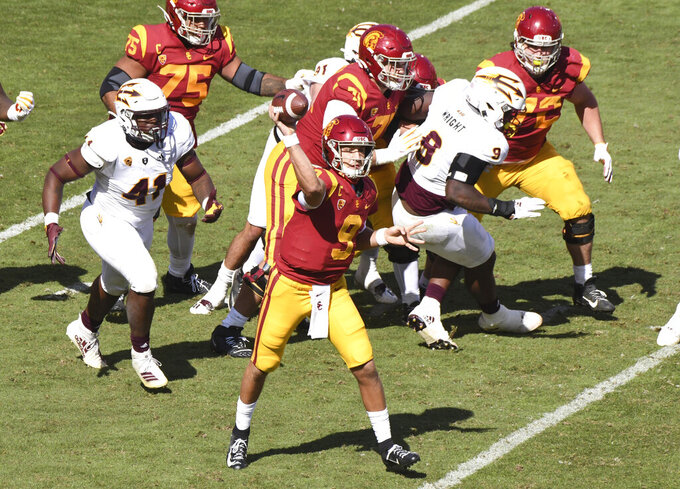 Quarterback Kedon Slovis #9 of the USC Trojans passes against the Arizona State Sun Devils in the second half of a NCAA football game at the Los Angeles Memorial Coliseum in Los Angeles on Saturday, November 7, 2020. USC Trojans won 28-27. (Keith Birmingham/The Orange County Register via AP)

No. 2 Baylor made an unexpected Thanksgiving night flight to Las Vegas, where the Bears now hope to open their men’s basketball schedule with two games this weekend..

Baylor expects to play Saturday against an opponent that was not initially revealed, and then take on Washington the following day.

The Bears had originally been slated to start the season Wednesday night against No. 18 Arizona State and then play No. 3 Villanova or Boston College on Thanksgiving Day at the Empire Classic in Connecticut. Baylor didn’t make that trip after coach Scott Drew revealed he had tested positive for COVID-19, though he was asymptomatic and was the team’s only positive the past 12 weeks. Drew is still in self-isolation.

Baylor then canceled Sunday’s game at Seton Hall in what was called a mutual agreement between the schools to call off the Big 12/Big East Battle matchup.

The Bears are set to play twice next week in Indianapolis, on Wednesday against No. 8 Illinois and then three days later against No. 1 Gonzaga.

No. 19 Southern California's scheduled home football game against Colorado has been canceled, with the Buffaloes moving quickly to set up a replacement game against San Diego State in Boulder on Saturday.

The Pac-12 said USC didn't have the minimum number of scholarship players available at a specific position group as a result of a number of positive COVID-19 cases and resulting isolation of additional players under contact tracing protocols.

San Diego State had an opening after its game at Fresno State was canceled.

USC and UCLA are the only teams in the Pac-12 South that played all of their first three games. Oregon and Oregon State also haven’t missed a game in the Pac-12 North.

Larry Fitzgerald and fellow Arizona Cardinals receiver Trent Sherfield have been placed on the Reserve/COVID-19 list.

The team said Fitzgerald and Sherfield were added to the list Thursday, three days ahead of their road game against the New England Patriots.

The 37-year-old Fitzgerald is in his 17th NFL season and hasn’t missed a regular-season game since 2014. He’s started all 10 games this season and has 43 catches for 336 yards.

The 24-year-old Sherfield is in his third season. He’s played in all 10 games, mostly on special teams.

Porter became the third player to be put on the list in the past three days for the Browns, who have been one of the NFL teams hit hardest by the virus.

Gustin is one of five players currently on Cleveland’s list along with Garrett, fullback Andy Janovich, linebacker Sione Takitaki and defensive end Joe Jackson. All will miss Sunday’s game at Jacksonville.

The Browns activated offensive lineman Chris Hubbard off the list on Thursday. He missed two games after testing positive on Nov. 13.

With Garrett and Gustin out, the Browns’ defensive line will be missing its best player and some depth against the equally short-handed Jaguars (1-9). Cleveland’s defense stepped up without Garrett last week and had five sacks, a safety and touchdown — an interception return by Takitaki — in a win over Philadelphia.

Also, the Browns will be without top cornerback Denzel Ward. He has a half injury and is expected to miss several games.

The UT-Arlington women’s basketball program has paused all team activities after a positive COVID-19 test.

The school said only that the positive test was for a member of the program’s Tier 1 personnel, which include student-athletes, coaches, team managers and support staff. The test result came back after the team’s season-opening win over Texas A&M Commerce on Wednesday.

UTA’s next two home games, Sunday against Midwestern State and Wednesday against Rice, have been canceled.

The Denver Broncos No. 3 quarterback, Jeff Driskel, has been placed on the COVID-19 list, but contact tracing showed that starter Drew Lock and the Broncos’ other QBs weren’t in danger of being infected by the coronavirus.

“They have determined that nobody else has to go on the list,” coach Vic Fangio said. “They cleared us to practice.”

The Cleveland Browns are reporting another positive coronavirus test for an unidentified player, continuing what has become an almost daily pattern over the past two weeks.

The team closed its facility in Berea, Ohio, on Thursday for the third consecutive day to conduct tracing in order to find out if any others are considered high-risk close contacts.

The Atlanta Falcons also halted in-person activities and were working virtually and conducting contact tracing after two non-coaching members of the staff tested positive for COVID-19.

On Wednesday, the Browns placed starting linebacker Sione Takitaki on the COVID-19 list and kept eight players out of practice as a precaution. Browns coach Kevin Stefanski also had his team practice in shifts to try to control possible spread of the virus.

Takitaki, who returned an interception for a touchdown against the Eagles, will miss this week’s game, along with fullback Andy Janovich, defensive end Joe Jackson and the unknown new positive player. Stefanski said offensive lineman Chris Hubbard may be returning after testing positive.

The Atlanta Falcons are working virtually on Thanksgiving after two non-coaching members of the staff tested positive for COVID-19.

The Falcons called off practice Thursday and halted all activities at their training center in suburban Flowery Branch, marking the third time this season the team has taken such a step. Positive tests forced the team to work virtually before an Oct. 18 game at Minnesota and a Nov. 8 game against Denver.

The team is conducting contact tracing under the NFL’s coronavirus protocols.

Atlanta (3-7) is set to host the Las Vegas Raiders (6-4) on Sunday at Mercedes-Benz Stadium. As with the previous shutdowns, the Falcons say this one does not affect the status of the game.