The Latest: No. 3 Ohio State cancels game at Illinois 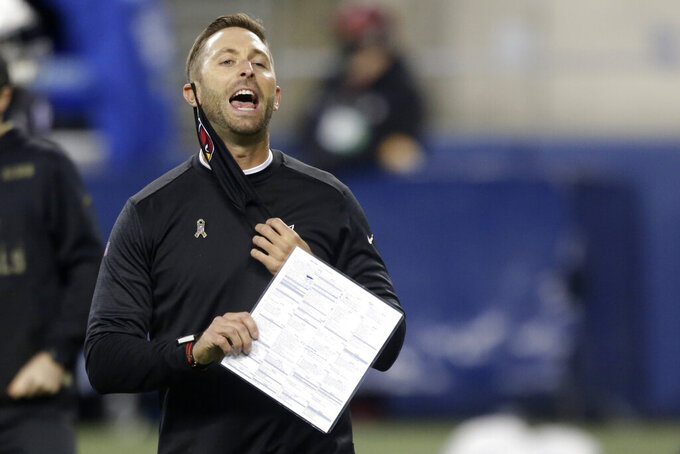 FILE - Arizona Cardinals head coach Kliff Kingsbury removes his mask to yell before an NFL football game against the Seattle Seahawks, Thursday, Nov. 19, 2020, in Seattle. The New England Patriots host the Cardinals on Sunday Nov. 29. With a win, Arizona can also add yet another blow to the New England’s fading playoff hopes. (AP Photo/Lindsey Wasson)

Ohio State’s football game at Illinois has been canceled because the No. 3 Buckeyes have had a spike of COVID-19 cases this week.

The cancelation came about sevens hours after the school announced coach Ryan Day had tested positive and would not be available to coach if the Buckeyes played.

The team did not travel Friday to Champaign, Illinois, as scheduled so additional COVID-19 testing could be conducted. After finding returning positive tests, the game was called. This is the second game of the Big Ten season Ohio State has had canceled. Big Ten rules require teams to play at least six game in this abbreviated season to be eligible to play in the Big Ten championship game unless the average for all teams drops below six. Ohio State (4-0) has only two game remaining on its regular-season schedule.

Arizona has canceled its scheduled men's basketball home game Sunday against UTEP after a positive COVID-19 test in the Miners’ program.

Arizona is looking for opportunities to replace the game.

The Wildcats also had their season opener Wednesday canceled due to a positive coronavirus test in Northern Arizona’s program. Arizona beat Grambling State 74-55 on Friday.

Middle Tennessee has canceled Saturday’s home football game against Florida Atlantic due to COVID-19 cases, contact tracing and injuries inside the Blue Raiders.

No makeup date has been set yet, and Middle Tennessee will be working with Conference USA for rescheduling a game between teams that have played each other every season since 2003.

Middle Tennessee athletic director Chris Massaro says this is disappointing for both the program and fans but that it’s out of their control. Massaro thanked FAU’s administrators for their cooperation and understanding and notes cases are increasing all over the country making this very challenging times.

The National Collegiate Hockey Conference has made changes to its 2020-21 schedule because of a positive COVID-19 test and quarantine requirements for the entire Colorado College team.

The coronavirus infection has forced the Tigers to delay the start of their season.

The conference will still begin its pod season on Tuesday at the University of Nebraka Omah’s Baxter Arena. But Colorado College’s first four games have been moved, two of them to later in December and two to the second half of the season.

The COVID-19 case on the Colorado College team resulted in seven games being changed.

The Arizona Cardinals say the general public won’t be permitted to attend the team’s home game against the Los Angeles Rams on Dec. 6.

The Cardinals had slowly increased capacity during the season and 4,200 fans were allowed at the team’s last two home games.

But with coronavirus cases rising in Arizona and elsewhere, the team reversed course on Friday “based on the latest COVID-19 information and guidance from the Arizona Department of Health Services.”

The team said a small number of spectators will be allowed for the game against the Rams, including family members of Cardinals players and staff.

The team said it will consult with state health officials before deciding if fans will be allowed at the final two home games of the season on Dec. 20 and Dec. 27.

McVay decided to hold virtual meetings Friday as a precaution. Strong Santa Ana winds in the area and the fact that the Rams are playing on a short week after defeating Tampa Bay 27-24 on Monday night also factored into his decision.

Georgetown's women’s basketball opener at Richmond scheduled for Sunday has been postponed due to a positive COVID-19 test within the Hoyas' team.

his decision was made Friday following consultation with the university’s Public Health Office and the athletic department’s medical staff.

The NFL’s last unbeaten team is facing its second COVID-19 scare this month.

The team made the announcement shortly after the NFL moved Pittsburgh’s game against Baltimore from Sunday to Tuesday because of a COVID-19 issue with the Ravens.

Pittsburgh tight end Vance McDonald tested positive following a win over Dallas this month and returned to practice this week. Quarterback Ben Roethlisberger and starting inside linebacker Vince Williams were among a handful of players forced to self-quarantine that week because of contact tracing.

Roethlisberger and Williams did not miss a game, both returning in time to play in a victory over Cincinnati. McDonald returned to practice this week and is expected to play against the Ravens.

The potential loss of Tuitt deals a blow to Pittsburgh’s dynamic pass rush. Tuitt is third on the team with seven sacks and his disruptive presence up the middle helps create opportunities for outside linebackers T.J. Watt and Bud Dupree.

The Norse announced the decisions Friday after a positive result hours earlier from a group that includes players, coaches and essential support staff. The person is not showing symptoms and a confirmation test is being run. Northern Kentucky says it’s following Horizon League and NCAA protocols.

Chattanooga now plays next on Monday night at Tennessee Tech.

No. 3 Villanova has added a third game at Bubbleville, the 11-day gathering of college basketball teams in Connecticut for early season nonconference play.

The Wildcats are now scheduled to play Saturday night at the Mohegan Sun arena against Virginia Tech.

Temple had been scheduled to be the Hokies’ opponent for that game, but the Owls said Thursday they were was pausing team activities for 14 days following a positive coronavirus test in the program.

Villanova has already won two games this week at Mohegan Sun, beating Boston College, 76-67 on Wednesday and No. 18 Arizona State 83-74, on Thursday night to win the Empire Classic.

There are several tournaments and stand-alone games being played in the modified bubble at the Connecticut resort casino through Dec. 5.

It’s the third time this season the Broncos have had to scrap practice because of the coronavirus. And it comes a day after No. 3 quarterback Jeff Driskel went on the reserve/COVID-19 list.

The Broncos informed players early Friday that their facilities are closed and meetings will be held remotely leading to Sunday’s home game against the New Orleans Saints.

The Broncos previously canceled practices on Oct. 30 and Nov. 4 after a player either tested positive or came in close contact with an infected individual.

The Pinstripe Bowl at Yankee Stadium will not be played this year.

The game matches teams from the Big Ten and Atlantic Coast Conference. Organizers announced Friday that because of the recent increase in coronavirus cases in the region and state and local travel restrictions in New York, the game is off. The plan is for it to return next season.

There have now been eight bowls that will not be played this season, reducing the total number of games to 35.