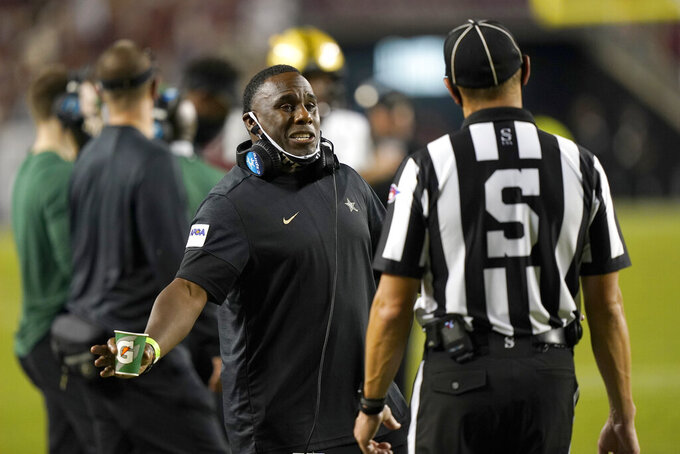 Notre Dame said it had 39 football players in isolation or quarantine on Monday as it deals with the COVID-19 outbreak that forced the Fighting Irish to postpone last week’s game at Wake Forest.

The Fighting Irish already had an open date scheduled for this week and are not slated to play again until Oct. 10 when Florida State travels to South Bend, Indiana.

In a news release, Notre Dame said 18 football players tested positive last week, seven of which had already been quarantined after contact tracing had determined they had been exposed to people who had already been infected.

A total of 25 players were in isolation after testing positive and another 14 were being quarantined after contact tracing, the school said. Notre Dame said the teams was able to resume conditioning activities for the players who were permitted to participate.

The Houston Texans will have up to 13,300 fans at NRG Stadium for their game on Sunday against the Minnesota Vikings.

The move comes after the Texans played without fans in their home opener on Sept. 20. The number of fans permitted is about 20% of stadium capacity. The team expects to allow the same number of fans at each of the remaining seven home games.

Fans age 10 and older will be required to wear masks while in the stadium unless they’re actively eating or drinking. No tailgating will be allowed.

The Texans consulted with city, county, state and NFL officials in making the decision to bring fans back to the stadium.

The Memphis Tigers will host Houston on Dec. 5 in a game rescheduled by the American Athletic Conference because of COVID-19 testing results.

The teams originally were scheduled to play Sept. 18 in prime time before positive tests and contact tracing at Memphis forced the postponement on Sept. 12.

Memphis is currently ranked No. 25, but the Tigers have not played since their season-opening win over Arkansas State. Their game against UTSA, scheduled to be played this past Friday night, was canceled.

The AAC will decide in November the date of its championship game.

Vanderbilt has changed its mind on athletic events in October and will be letting a limited number of students attend Saturday night’s football game with No. 20 LSU.

Athletic director Candice Lee announced the reversal Monday, calling it a small step toward normalcy based on the guidance from the university’s public health partners.

Vanderbilt students are tested weekly with strict protocols on campus. The result is a low COVID-19 positivity rate. Vanderbilt plans to ensure physical distancing, with masks required. Concession stands will not be open to limit movement. Seniors will be given the first opportunity to attend, and decisions about future student attendance will be made after this first game.

Chancellor Daniel Diermeier says sports is an important way for the campus community to connect.