The Latest: Packers to allow 6,000 fans at playoff game 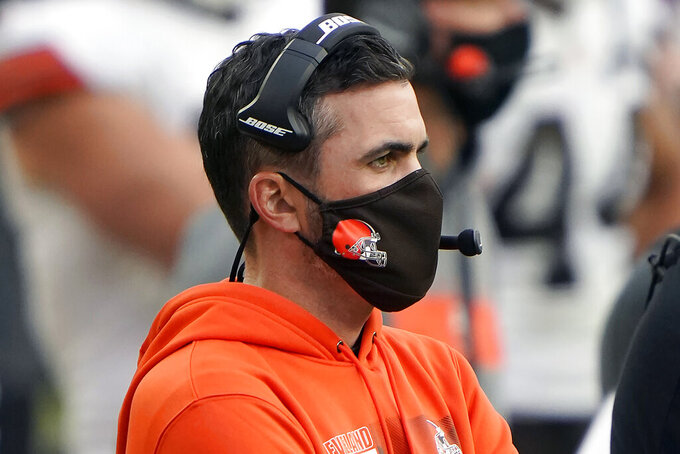 Cleveland Browns head coach Kevin Stefanski looks on from the sidelines during an NFL football game against the Pittsburgh Steelers, Sunday, Oct. 18, 2020, in Pittsburgh. Positive COVID-19 tests have knocked Stefanski out of Cleveland's wild-card game at Pittsburgh on Sunday night — the Browns' first playoff appearance since the 2002 season. (AP Photo/Justin Berl, File) 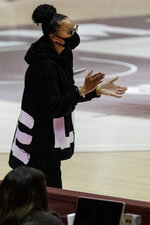 The Green Bay Packers are making about 6,000 tickets available to season-ticket holders for their divisional playoff game, which will mark the first time they will have paying spectators at home this season.

Packers officials say seats will be arranged in socially distanced pods of two, four and six tickets throughout Lambeau Field. They’ll be available to season-ticker holders who didn’t opt out of the opportunity to purchase tickets this season.

The Packers hadn’t allowed any spectators for their first four regular-season home games. In late November, they made seating available to team employees and their immediate family members to test out Lambeau Field safety protocols in case paying spectators were allowed later in the season. The last two home games also featured hundreds of frontline workers who were invited to attend.

Fans will have to stay in their pods unless they’re using the rest room or purchasing food or drinks. Tailgating in the parking lot is prohibited. Spectators must wear face coverings at all times.

As the top seed in the NFC playoffs, the Packers have a first-round bye. Their first home playoff game will be Jan. 16 or Jan. 17.

South Carolina has paused men’s basketball activities due to coronavirus issues within the program.

The team’s game Saturday at Mississippi has been postponed. The Gamecocks defeated Texas A&M 78-54 on Wednesday night, their first game since Dec. 6.

Earlier Thursday, South Carolina’s women’s team paused activities because of COVID-19 and postponed its game with Georgia scheduled for tonight.

Mississippi is scheduled to play next Tuesday at Florida. The Gamecocks’ next scheduled game is also Tuesday night, hosting No. 9 Tennessee.

No. 25 Florida State’s visit to Pittsburgh scheduled for Saturday has been postponed due to following COVID-19 testing issues within the Seminoles program.

The postponement is the third this week for Florida State. Duke’s visit to Tallahassee, Florida, last Saturday was postponed, as well as a trip to Syracuse scheduled for Wednesday. The Panthers ended up playing the Orange instead, rallying for a 63-60 victory.

The Atlantic Coast Conference adjusted its schedule after the announcement. Pitt’s game against Georgia Tech set for Tuesday, Jan. 12 has been shifted forward one day.

The Yellow Jackets are having COVID-19 issues of their own. Games against Notre Dame and Louisville scheduled for this week have already been postponed.

The women’s Big Ten basketball game on Sunday between Rutgers and Ohio State in Columbus has been postponed due to an increase in positive COVID-19 tests within the Rutgers program.

Rutgers’ scheduled home game with Purdue on Jan. 7 had previously been postponed. The schools will work with the conference to try to reschedule the game.

At least the Cleveland Browns won’t have to play in front of a sea of Terrible Towels when they visit the Pittsburgh Steelers in the playoffs on Sunday.

The Steelers had asked state officials to allow around 6,500 fans into Heinz Field, about 10% of capacity. The request was denied, meaning the cap will remain at 2,500, allowing only family and friends, a policy put in place following a surge in COVID-19 cases throughout Pennsylvania.

After beginning the season by playing two games inside an empty stadium, restrictions were eased in the fall for three contests. A crowd of 5,260 watched Pittsburgh drill the Browns 38-7 on Oct. 18. The more strident restrictions went into place in mid-November, and each of the Steelers’ final three games were played without fans.

Pittsburgh finished 7-1 at Heinz Field this season, a show of home-field dominance rare in 2020. Visiting teams posted a winning record (128-127-1) this season, the first time that’s happened since the AFL-NFL merger in 1970.

The Cleveland Browns have placed safety Ronnie Harrison on the COVID-19 reserve list while they await permission from the NFL to practice before Cleveland’s first playoff game since 2003.

Harrison is the latest infection on the Browns, who will be without coach Kevin Stefanski for Sunday’s wild-card game against the Pittsburgh Steelers after he tested positive with the virus. Dr. Allen Sills, the NFL’s chief medical officer, says there has been “some spread” amongst the Browns players.

Safety Andrew Sendejo was activated from the COVID list as Harrison was added, but the team is down seven rotational players and six coaches at this point and its training facility in Berea, Ohio, remains closed.

The Browns haven’t had an on-field workout this week and quarterback Baker Mayfield says he hasn’t thrown a pass since last Sunday and has been working on his footwork at home. Contact tracing and a review of test results is ongoing before a decision is made on practice Thursday.

An NFL spokesman said there “is no change to the status of the game.”

The NBA says its latest round of testing for COVID-19 returned four confirmed positives out of 498 players tested since Dec. 30.

Any player who returns a confirmed positive test is isolated until cleared for leaving isolation under rules established by the NBA and its players' union, in accordance with guidance from the Centers for Disease Control.

The Seton Hall women's basketball game at No. 3 Connecticut, originally scheduled for Feb. 10, will now be played next Wednesday in Storrs, Connecticut.

The Pirates were originally set to play at Creighton on Jan. 13, but that game was postponed due to the Bluejays’ current pause.

The Creighton women have paused team activities and postponed three games because of a recent positive COVID-19 test result. The team is on that pause for at least another eight days.

The Tulsa-Central Florida men’s basketball game scheduled for Saturday at Tulsa has been postponed because of positive COVID-19 tests and subsequent contact tracing among UCF athletes.

The American Athletic Conference made the announcement on Thursday. The game has not yet been rescheduled.

It's the second straight postponement for UCF for the same reasons.

Tulsa’s next game now is scheduled for Jan. 13 at Wichita State. The Golden Hurricane are on a six-game win streak.

The Panthers (4-3) had paused all athletic activities last week following a pair of positive tests, leading to the postponement of home games against Coastal Carolina on Jan. 1 and 2.

The school announced Thursday the shutdown will continue for another seven days. Georgia State had been scheduled to host Troy State on Friday and Saturday.

No decision has been made on rescheduling the postponed games.

The Cleveland Browns remain away from their facility and practice field while awaiting COVID-19 results only days before their first playoff game in nearly two decades.

The team has been limited to only virtual meetings in the aftermath of coach Kevin Stefanski, Pro Bowl guard Joel Bitonio and three others testing positive for the virus on Tuesday.

The Browns play the Pittsburgh Steelers on Sunday night in an AFC wild-card game.

Stefanski will not be on the sideline for Cleveland’s first postseason appearance since Jan. 5, 2003. Special teams coordinator Mike Priefer will step in for Stefanski.

The Browns are hoping to get some players back from the COVID-19 list for the game. One is star cornerback Denzel Ward. He tested positive last week and missed Cleveland’s 24-22 win over Pittsburgh last Sunday.

Ward is Cleveland’s best defensive back and will be assigned to either Steelers wide receiver Juju Smith-Schuster or Chase Claypool.

No. 5 South Carolina has paused team activities and postponed its women’s basketball game with Georgia on Thursday night.

The team said a combination of a positive coronavirus test, contact tracing and quarantine led them to halt things until further testing is done.

The Gamecocks are scheduled to play at No. 10 Kentucky on Sunday.