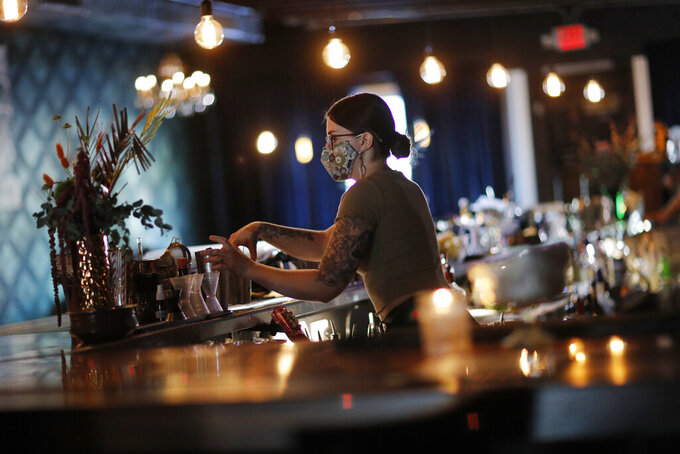 FILE - In this July 10, 2020, file photo, Alanna McDonnell mixes drinks at Velveteen Rabbit, a cocktail bar in the Las Vegas Arts District in Las Vegas. Bars in and around Las Vegas can reopen after this weekend with limited capacity, distance between customers and facial coverings all around, officials announced Thursday, Sept. 17, 2020. (AP Photo/John Locher, File)

SAO PAULO — Brazil’s Supreme Court is suggesting attendees at last week’s inauguration of its chief justice be tested after six others confirmed they have the coronavirus.

Brazil’s top court says its ceremonial team “is in contact with guests who were present at the ceremony to warn them about the importance of seeking medical service in case they have been exposed in any way, including at other events.”

Only 20% of the seats at the ceremony in Brasilia were occupied on Sept. 10. Face masks were required and all guests had their temperatures taken before entry, according to the court’s statement.

— Israel returns to full lockdown to contain a worsening coronavirus outbreak while the government has been plagued by infighting.

— Iconic Key West bar that Ernest Hemingway frequented during the 1930s, Sloppy Joe's, has reopened after six months shuttered by the coronavirus.

THE HAGUE, Netherlands — The Dutch justice minister will be fined for breaches of social distancing rules at his recent wedding.

Public prosecutors say Ferd Grapperhaus will be fined 390 euros ($460) for the breaches at his Aug. 22 wedding in the upscale town of Bloemendaal. Photos taken of wedding guests gathered outside showed that some were not adhering to the government’s required 1.5-meter (5 foot) social distancing rules.

The photos were an embarrassment for the Dutch government and Grapperhaus, who is the minister responsible for making sure coronavirus measures are enforced.

The announcement of the fine came amid rising coronavirus infection numbers in the Netherlands.

MADRID — A line of tents has been installed at the gates of a Madrid military hospital four months after similar structures for triaging patients were taken down.

Spain’s Defense Ministry, which manages the Gómez Ulla military hospital, says the tents are currently empty, installed protectively ahead of the second wave taking hold on the Spanish capital.

Madrid has a rate of transmission six times higher than the national average.

Officials are expected to announce measures to slow down the outbreaks. That might include localized lockdowns or other “restrictions on mobility” centered in the city’s hardest-hit areas, which are also the poorest and more densely populated.

PROVIDENCE, R.I. — The president of Providence College announced the school will move to remote-only learning for at least two weeks after a surge of coronavirus cases among students.

More than 80 students tested positive in just two days, the private Catholic university’s president, Rev. Kenneth Sicard, wrote in a message to the community. The school has 106 positive student cases among about 4,800 students.

Sicard says if things get worse, the campus may be shut down for the semester.

BRUSSELS — The EU Commission has finalized a deal with Sanofi and GSK allowing its 27 member states to buy up to 300 million doses of a potential COVID-19 vaccine.

It’s the second contract signed by the bloc’s executive arm after a first agreement was reached last month with AstraZeneca for up to 400 million doses.

“With several countries in Europe experiencing new outbreaks after the summer period, a safe and effective vaccine is more instrumental than ever to overcome this pandemic and its devastating effects on our economies and societies,” said Stella Kyriakides, the Commissioner for health.

The Commission says some of the reserved shots could be donated to “lower- and middle-income countries.”

LONDON — The European Medicines Agency is recommending an inexpensive steroid be licensed for the treatment of people with severe coronavirus who need oxygen support.

The EMA says it is endorsing the use of dexamethasone in adults and adolescents age 12 or older who need either supplemental oxygen or a ventilator to help them breathe. The drug can be taken orally or via an infusion.

In June, British researchers published research showing dexamethasone can reduce deaths by up to one third in patients hospitalized with severe coronavirus. Shortly afterward, the U.K. government immediately authorized its use in hospitals across the country for seriously ill coronavirus patients.

Steroid drugs like dexamethasone are typically used to reduce inflammation, which sometimes develops in COVID-19 patients as their immune system kicks into overdrive to fight the virus.

Frederiksen says the size of gatherings was lowered from 100 to 50 for the country. The new restrictions run Saturday through Oct. 4.

“When we take more measures, it is to get the infection down. It is important for me to stress that we are not in the same place as March 11,” he said.

Denmark was one the first European countries to ease its coronavirus lockdown as the first wave appeared to be contained.

ROME — The Sicilian town of Corleone, made famous by the fictional Mafia clan in “The Godfather,” has ordered schools closed and a limited lockdown because of a coronavirus spike.

The city administration told all guests at a wedding on Sept. 12 and anyone who lives with them to self-isolate and inform their doctors and city health authorities. In a Facebook post, Mayor Nicolò Nicolosi said he expected “maximum cooperation to overcome the current crisis.”

The town, which is part of the province of Palermo, has reported at least five positive cases in recent days. News reports said they were tied to a wedding reception involving some 250 people.

Like the rest of southern Italy, Sicily has seen a new spate of infections since August, with more than 500 of its 5,500 cases overall registered in the past three weeks.

The Corleone administration ordered schools closed, put a curfew on bars and suspended the weekly market and other public gatherings.

Corleone was the home and last name of the fictional crime clan in “The Godfather” movie. It was also the real-life stronghold of the late convicted mobster and reputed chieftain, Bernardo Provenzano. In 2016, the Italian government dissolved the municipal government after determining the mob had infiltrated it.

LONDON - Confirmed cases of the coronavirus have topped 30 million worldwide, according to a Johns Hopkins University tally.

The worldwide count of known COVID-19 infections climbed past 30 million on Thursday, with more than half of them from just three countries: the U.S., India and Brazil, according to the tally kept by Johns Hopkins researchers.

The number increased by 10 million in just over a month; global cases passed 20 million on August 12.

Individual numbers could vary as the university’s tally sometimes lags behind country reports.

PRAGUE — Confirmed coronavirus cases in the Czech Republic have hit a new record high for the third straight day and surpassed 3,000 reported cases in 24 hours for the first time.

That day-to-day increase was almost as high as the number of all cases the country reported in March, during the first wave of the coronavirus pandemic.

The Czech capital of Prague was the hardest hit with 191 infections per 100,000 residents.

LONDON -- British Health Secretary Matt Hancock has hinted that fresh restrictions on social gatherings in England could be announced soon as part of efforts to suppress a sharp spike in confirmed coronavirus cases.

Following reports that the government was considering fresh curbs on the hospitality sector, such as pubs and restaurants, Hancock said this is a “big moment for the country.”

He said that another national lockdown is the “last line of defense” and that most transmissions of the virus are taking place in social settings.

Hancock says the government’s strategy over the coming weeks is to contain the virus as much as possible “whilst protecting education and the economy.”

The government has come under sustained criticism in the past week following serious issues with its virus testing program.

NEW DELHI — India’s coronavirus cases have jumped by another 96,424 infections in the past 24 hours, showing little signs of slowing down.

The Health Ministry on Friday raised the nation’s confirmed total since the pandemic began to more than 5.21 million. It said 1,174 more people died in the past 24 hours, for a total of 84,372.

India is expected within weeks to surpass the reported infections seen in the United States, where more than 6.67 million people have been reported infected, the most in the world.

India’s Prime Minister Narendra Modi on Thursday made a fresh appeal to people to use face masks and maintain social distance as his government chalked out plans to handle big congregations expected during a major Hindu festival season beginning next month.

UNITED NATIONS — U.N. World Food Program chief David Beasley is warning that 270 million people are “marching toward the brink of starvation” because of the toxic combination of conflict, climate change and the COVID-19 pandemic.

Beasley on Thursday urged donor nations and billionaires to contribute $4.9 billion to feed the 30 million he said will die without U.N. assistance.

He reminded the U.N. Security Council of his warning five months ago that “the world stood on the brink of a hunger pandemic,” and welcomed the response, which averted famine and led countries to fight back against the coronavirus.

Beasley said the U.N. food agency is keeping people alive “and avoiding a humanitarian catastrophe” but he said “the fight is far, far, far from over.”

WELLINGTON, New Zealand — New Zealand has reported no new confirmed cases of the coronavirus for the first time in more than five weeks as hopes rise that an outbreak discovered in Auckland last month has been stamped out.

Friday’s report also marked the fourth consecutive day without any cases of community transmission. All recent cases have been found among quarantined travelers returning from abroad.

Authorities have still not pinpointed the origin of the August outbreak, which they believe was imported. Auckland was temporarily placed into lockdown as the country continued its strategy of trying to completely eliminate community spread of the virus.

New Zealand has reported a total of just over 1,800 cases and 25 deaths.

Thirteen of the cases reported Friday were in the northern province of Shaanxi, whose capital Xi’an is a major industrial center. The eastern financial and business hub of Shanghai reported 12.

China has gone more than a month without reporting any cases of locally transmitted coronavirus cases within its borders.

But it remains highly vigilant for cases brought in from outside the country. It has suspended issuing new visas and anyone arriving from abroad is required to undergo a two-week quarantine.

The Korea Disease Control and Prevention Agency said Friday that the 126 confirmed cased added in the past 24 hours took the country’s reported total since the pandemic began to 22,783, with 377 deaths.

The agency says 82 of the newly reported cases were from the Seoul metropolitan area, which has been at the center of the viral resurgence since early last month.

SACRAMENTO, Calif. — California companies must pay workers compensation benefits to any employees that become infected with the coronavirus and they must warn employees of any potential exposure to the virus under two laws that Gov. Gavin Newsom signed Thursday.

Business groups have criticized the measures as “unworkable.”

The law on informing employees requires that businesses tell workers whenever they they have been exposed to someone who has either tested positive, been ordered to isolate or died because of the virus. Companies must do so within one business day of learning of the exposures or they can face fines issued by the Division of Occupational Safety and Health.

LAS VEGAS — Bars in and around Las Vegas can reopen at midnight Sunday with limited capacity, while requiring customers to use facial coverings and obey social distance rules.

The moves relieved a hot-button issue and relaxed the last of the bar closure orders that Gov. Steve Sisolak re-imposed more than two months ago to limit gatherings where alcohol is served in the state’s coronavirus pandemic hot spot areas.

Taverns, bars, breweries, distilleries and wineries were allowed to reopen earlier this week in the Reno area.