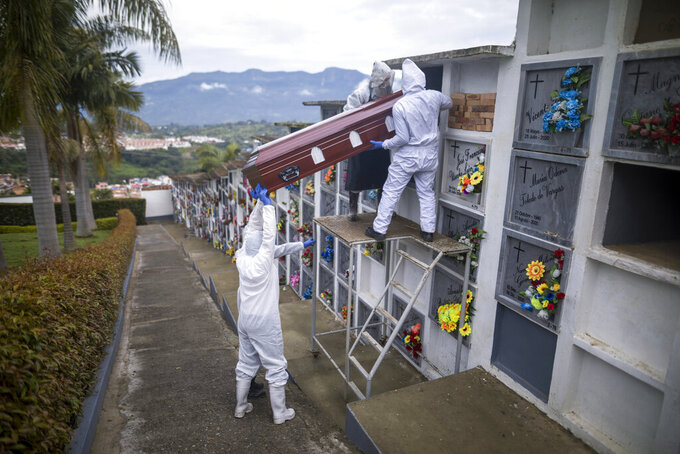 Cemetery and funeral workers place the coffin of a man who died of COVID-19 into a niche at the Nuestra Señora de Belen cemetery in Fusagasuga, Colombia, Wednesday, June 9, 2021. (AP Photo/Ivan Valencia)

SEATTLE — Washington state’s new “joints for jabs” vaccination incentive program is off to a rough start.

Seeking to get more people to get the coronavirus shots, officials announced this week that the state’s nearly 500 licensed marijuana retailers could begin hosting vaccine clinics and offering a single, free pre-rolled marijuana cigarette to those who get a shot.

But cannabis retailers say many of them don’t have the space to host clinics. And some health care providers are uneasy about setting up a clinic on the site of a marijuana business.

The pot retailers also complain that they have to have an onsite clinic while the state allows breweries and wineries to give away drinks to customers who merely show proof of vaccination — no onsite clinic required.

— France is back: Borders reopen to American tourists, others

HONOLULU — A class-action lawsuit has been filed on behalf of inmates in Hawaii, arguing that the state has failed to protect people from coronavirus outbreaks in unsanitary jails and prisons.

The lawsuit says that nearly half of the prisoners held by Hawaii have contracted the virus and that five out of nine facilities have experienced “uncontrolled outbreaks” of coronavirus cases.

The lawsuit describes poor conditions such as cells not being sanitized or cleaned when virus-positive inmates move out and a new prisoner moves in.

A spokeswoman for the state Department of Public Safety says the agency has been advised not to comment on possible pending legal matters.

SANTA FE, N.M. — Private child care centers in New Mexico are the latest sites to offer perks to parents lining up to get a coronavirus vaccination.

Running through July 4, they are offering free child care to parents with vaccine appointments and to those who are recovering from vaccine side effects.

That is on top of other corporate and state incentives for getting vaccinated, which range from free beer to lottery sweepstakes.

WASHINGTON — Medicare is announcing a significant increase in what it will pay to vaccinate homebound older people against the coronavirus as, part of the Biden administration’s “last mile” effort to get shots in the arms of as many Americans as possible.

Officials said Wednesday the program will pay roughly $35 more per dose when enrollees are vaccinated at home. For a two-shot regimen that means Medicare will pay $150, or about $70 more than currently.

Medicare estimates 1.6 million people 65 and older may have trouble getting to pharmacies or vaccination centers because of obstacles to leaving home. These can include physical impairments as well as neurologic disorders such as Alzheimer’s disease.

Local health departments in many communities have already launched efforts to locate and vaccinate homebound older people, who remain at risk because visitors may unwittingly bring the virus into their homes.

LAHAINA, Hawaii — Hawaii’s restaurants are having a hard time serving an influx of tourists returning to the islands as pandemic restrictions across the nation ease.

Restaurants in Hawaii are operating at 50% capacity. Gov. David Ige says that limit will not be increased until 60% of Hawaii residents are vaccinated. When that benchmark is met, restaurants will be able to operate at 75% capacity. But capacity increases won’t help some restaurants with limited space.

Some restaurants won’t be able to serve many more people until social distancing rules are changed.

TORONTO — Canada’s health minister says fully vaccinated Canadian citizens and permanent residents who test negative for the coronavirus will soon be exempt from a two-week quarantine when returning to the country.

Officials expect that to happen in early July.

Air travelers who have received shots at least 14 days before entering Canada will be able to skip a stay in a government-approved quarantine hotel but will still have to stay in isolation until a virus test comes back negative.

Currently, arriving air travelers are required to spend three days in quarantine at a hotel at their expense and then complete their two weeks in self-isolation. They will be required to take a test upon arrival in Canada, and remain in isolation until the test comes back negative.

WASHINGTON — The U.S. will buy 500 million more doses of the Pfizer COVID-19 vaccine to share through the COVAX alliance for donation to 92 lower-income countries and the African Union over the next year.

That’s according to a person familiar with the matter.

President Joe Biden is expected to make the announcement Thursday in a speech before the start of Group of Seven summit. According to the person, 200 million doses — enough to fully protect 100 million people — will be shared this year, with the balance to be donated in the first half of 2022.

The person confirmed the announcement on the condition of anonymity. The news was first reported by the Washington Post.

SACRAMENTO, Calif. -- A dozen major California business organizations have called on Gov. Gavin Newsom to change recently adopted workplace regulations requiring all workers to wear masks unless everyone in a room is vaccinated.

The California Retailers Association and organizations representing manufacturers, farmers, tourism interests and other industries sent a letter to Newsom asking him to issue an emergency order rescinding the regulations adopted last week.

Those regulations came from the California Occupational Safety and Health Standards Board and run counter to Newsom’s plan to lift nearly all mask rules for vaccinated people next Tuesday. The board called a special meeting for Wednesday to reconsider the masking rules.

MOSCOW — The Russian capital has recorded a steep uptick in coronavirus infections this week and authorities say enforcement measures for wearing masks and gloves will increase.

On Wednesday, the national coronavirus task force reported 4,124 new cases in Moscow, a 40% increase from Sunday’s tally of 2,936. The head of the directorate that oversees control of public services for the city, Yevgeny Danchikov, says enforcement of masks and gloves on public transport, in shopping centers and in other public places will be tightened. Violators could be fined up to 5,000 rubles ($70).

PORT-AU-PRINCE, Haiti — Haiti has perplexed experts with low infection and death rates from COVID-19 despite its rickety public health system, a lack of vaccines and fewer enforced safety measures.

That’s no longer the case. The few Haitian hospitals treating COVID-19 cases report turning away patients. There were 2,271 cases and 62 deaths recorded in the past month. Health experts say those figures miss the true scale of what they consider the largest spike in cases since the coronavirus arrived.

The government declared a health emergency on May 24 and imposed a curfew and safety measures — though few Haitians appear to follow them. Most shun, or can’t afford, face masks and it’s difficult to keep a distance while shopping in bustling marketplaces or riding crowded buses.

A total of 15,700 confirmed cases and more than 330 confirmed deaths have been reported in a nation of more than 11 million.

LONDON — The U.K. has recorded its highest daily coronavirus cases since late February, suggesting the Delta variant is spreading widely across the country.

Government figures Wednesday showed that the U.K. recorded 7,540 new infections, the biggest daily increase since Feb. 26. Cases have been rising over the past few weeks as a result of the Delta variant first identified in India. The concern is the increase will pressure the health system once again.

Another 123 people entered the hospital with symptoms related to coronavirus, taking the total to 1,024. The number of people dying after testing positive for COVID-19 rose by six to 127,860 confirmed deaths.

Health experts hope the rapid rollout of vaccines will break the link between new cases and deaths. So far, a large proportion of the people infected are within the less vulnerable younger age groups, many of whom have yet to receive a first dose.

Developing nations are pushing for a proposal to ease patents and other intellectual property protections for coronavirus vaccines, but some wealthier countries remain opposed. A panel focusing on intellectual property wrapped up a two-day meeting on Wednesday with an agreement to start a process for pulling together proposals to improve the fight against COVID-19 through the WTO’s intricate system of rules.

Intellectual property includes patents on technological know-how regarding vaccines. WTO members plan to start discussions next week in hope of sending a report to the Geneva-based trade body’s ambassadors in July.

Sri Lanka is facing a severe shortage of AstraZeneca vaccines as the producer in the neighboring India failed to provide the promised stock due to the crisis in that country.

The request “has been met with positive responses,” according to a statement from the president’s office. Sri Lanka is currently using China’s Sinopharm and Rusian Sputnik V vaccines.

Sri Lanka has witnessed an increase of positive cases and deaths since April, partly caused by celebrations and shopping during last month’s traditional new year festival. Sri Lanka has registered more than 210,000 cases and 1,843 confirmed deaths.

BEIRUT — Lebanon’s caretaker health minister has inaugurated the country’s largest vaccination center at a shopping mall in Beirut as the government speeds up the inoculation campaign against the coronavirus.

Hamad Hassan says the center run by the Lebanese Red Cross can vaccinate more than 5,000 persons a day and aims to encourage more people to take the vaccines outside hospitals and clinics.

Lebanon, a nation of about 6 million people, including a million Syrian refugees, has vaccinated more than 600,000 people with a first shot.

After hitting a record of more than 6,000 cases and nearly 100 deaths in one day earlier this year, lockdowns and strict measures by the government helped bring down the numbers. Lebanon’s health ministry reported 139 new cases and six deaths on Wednesday.

PARIS — France’s government spokesman says the coronavirus situation in France “clearly improved” and the country on Wednesday reopened indoor spaces in restaurants and cafes as well as gyms and swimming pools.

Gabriel Attal says, “That is not only a foretaste, but the taste of the life we once had that we are getting back.”

Major sport and cultural events are allowed with a maximum number of 5,000 people. They’ll need to show a vaccination certificate or a negative test within the last 48 hours. Terraces of restaurants and cafes, theaters, cinemas and museums reopened on May 19 after a six-month coronavirus shutdown.

About 54% of France’s adult population has received at least one COVID-19 vaccine dose. France is registering 6,500 daily virus cases on average, down from 35,000 in the March-April peak.

The nation has reported 110,000 confirmed deaths, among the highest tolls in Europe.