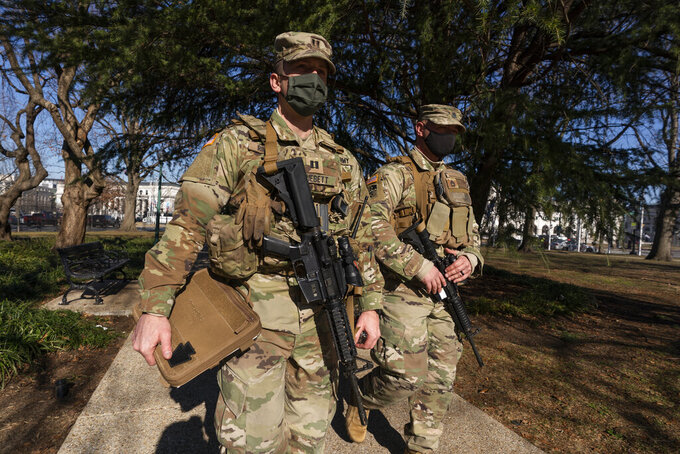 Armed members of the Maryland National Guard secures the perimeter around the U.S. Capitol, Wednesday, Jan. 13, 2021, in Washington as the House of Representatives continues with its fast-moving House vote to impeach President Donald Trump, a week after a mob of Trump supporters stormed the U.S. Capitol. (AP Photo/Manuel Balce Ceneta)

WASHINGTON (AP) — The Latest on President Donald Trump's impeachment and the fallout from the Jan. 6 attack of the Capitol by pro-Trump loyalists (all times local):

An Arkansas man accused of beating a police officer with a pole flying a U.S. flag during last week’s riot at the U.S. Capitol has been arrested.

In an arrest affidavit filed Thursday in federal court in Washington, an FBI agent said Peter Francis Stager is shown in video and photographs striking a prone police officer repeatedly with the flagpole after rioters dragged the officer down the Capitol’s west stairs.

The affidavit says confidential informants had recognized Stager in riot video and photographs and alerted authorities, who have charged Stager with interfering with law enforcement officers during a civil disorder.

A spokeswoman for the U.S. attorney's office in Little Rock, Arkansas, confirmed Stager was in custody Thursday. No attorney was listed for Stager in court records.

HERE’S WHAT YOU NEED TO KNOW ABOUT IMPEACHMENT AND THE FALLOUT FROM THE JAN. 6 RIOTING AT THE CAPITOL:

President Donald Trump is facing an impeachment trial in the Senate that could begin on Jan. 20, the day Democrat Joe Biden is inaugurated as America's 46th president. Trump was impeached on Wednesday, one week after he encouraged a mob of loyalists to “fight like hell” against election results and the Capitol became the target of a deadly siege. The FBI is warning that armed protests by violent Trump supporters are being planned in all 50 state capitals as well as in Washington.

— Expecting trouble, DC locks down a week before inauguration

HERE’S WHAT ELSE IS GOING ON:

Prosecutors say an Alabama man who was photographed on the Senate floor during the riot at the U.S. Capitol and who recorded an anonymous YouTube video days later about the angry crowd has been arrested.

Joshua Mathew Black, of Leeds, was arrested Thursday and charged with entering a restricted building and violent entry or disorderly conduct.

Black said in the video that the “crowd went crazy” over Congress proceeding with certifying President-elect Joe Biden’s win over President Donald Trump and believed Vice President Mike Pence “turned on us and that they had stolen the election.” Election officials, judges and Trump’s former attorney general, William Barr, have rejected claims that the election results were fraudulent.

It was not immediately clear if Black has a lawyer.

Black said his cheek was pierced by a projectile during the riot while trying to help a law enforcement officer who was being stomped on by members of the crowd.

A prosecutor says a retired Air Force officer who was part of the mob that stormed the U.S. Capitol carried plastic zip-tie handcuffs because he meant “to take hostages.”

The 53-year-old is charged with knowingly entering or remaining in a restricted building or grounds without lawful authority and violent entry and disorderly conduct on Capitol grounds.

A judge said he would release Brock to home confinement.

Brock’s attorney says there is no evidence that he did anything violent inside the Capitol.

Army officials have been grappling with requests for assistance from a number of law enforcement agencies who will be providing security across the city and surrounding the U.S. Capitol. Officials said Thursday that in the ongoing discussions with law enforcement, it has been determined that 21,000 Guard members should be enough. Others said requests for assistance at one point totaled as many as 26,000, but officials said those were not formal, official requests.

Officials had initially said up to 15,000 would be needed, but law enforcement had asked for more help locking down the Capitol and the city. Officials also said that the total still may grow.

The U.S. officials weren’t authorized to discuss security details publicly and spoke on condition of anonymity.

As of Thursday, there are roughly 7,000 Guard members in Washington, with thousands more on the way.

Prosecutors say a Delaware man photographed carrying a Confederate battle flag during a deadly riot in the U.S. Capitol has been arrested after authorities used the image to help identify him.

Federal prosecutors say Kevin Seefried, who was seen carrying the flag, was arrested in Delaware along with his son Hunter Seefried. Prosecutors say both entered the Senate building through a broken window.

They were charged with unlawfully entering a restricted building, violent entry and disorderly conduct on Capitol grounds and degradation of government property.

Court documents say the men were identified after the FBI was told by a coworker of Hunter Seefried’s that he had bragged about being in the Capitol with his father.

No one answered the phone Thursday afternoon at a number listed for them.

A retired Pennsylvania firefighter has been arrested on suspicion of throwing a fire extinguisher that hit three police officers during the siege at the U.S. Capitol.

Former Chester firefighter Robert Sanford was arrested Thursday on charges including assault of a police officer and unlawfully entering the Capitol.

The charges against Sanford are not related to the widely publicized attack on an officer who was hit with a fire extinguisher and died.

Sanford is appearing in federal court in Pennsylvania, but the case will be prosecuted in Washington.

Sanford couldn’t be reached for comment Thursday, and it wasn’t clear whether he had an attorney.

U.S. officials say the number of National Guard troops pouring into the nation’s capital to assist law enforcement with security for the inauguration of President-elect Joe Biden has grown to about 26,000.

Officials say Guard members from all 50 states, as well as the District of Columbia, are deploying to the city. Officials had initially said up to 20,000 would be needed, but the final number has grown based on additional requests from law enforcement officials.

The U.S. officials weren’t authorized to discuss security details publicly and spoke on condition of anonymity.

As of Thursday, there are roughly 7,000 Guard members in Washington, with thousands more on the way. Officials say 3,000 to 4,000 of those Guard members are armed.

The length of the missions may vary, but Defense Department officials were authorized to deploy the Guard for up to 30 days for the inauguration and surrounding protests.

Pentagon officials approved requests to have some Guard members armed with either long guns or handguns, particularly those Guard members assigned near the U.S. Capitol.

Democratic Rep. Adriano Espaillat of New York says he has the coronavirus. He’s the latest House member to report testing positive since dozens of lawmakers huddled together for protection during the Jan. 6 insurrection at the U.S. Capitol.

Espaillat says he is not experiencing any symptoms, is quarantining at home and will keep up his work representing his Upper Manhattan district. He says he's gotten both doses of a COVID-19 vaccine.

At least three other House members have tested positive after a group of representatives fled to a secure location on Capitol Hill when supporters of President Donald Trump stormed and ransacked the Capitol.

It’s not clear where and when lawmakers caught the virus. But the Capitol’s attending physician has told House members they might have been exposed to someone in the room who had the virus.

President Donald Trump’s impeachment trial could begin at 1 p.m. on Inauguration Day next Wednesday as President-elect Joe Biden is being sworn into office. That’s according to a a timeline of Senate procedure obtained by The Associated Press.

It’s the possible schedule if House Speaker Nancy Pelosi sends the article of impeachment to the Senate soon.

Trump was impeached by the House on Wednesday on a single charge of incitement to insurrection after the deadly Capitol siege last week by a pro-Trump mob. Trump is the only president ever to be impeached twice.

Pelosi hasn’t said when she’ll send the impeachment charge to the Senate. Some Democrats have suggested holding back to allow Biden time to be inaugurated and to start working on his priorities first.

Biden has suggested the Senate could divide its time between the impeachment trial and confirming his Cabinet nominees and working on COVID-19 relief and other issues.

Even though President Donald Trump's impeachment trial in the Senate won’t happen until he is out of office, it could still have the effect of preventing him from running for president again.

If the Senate were to convict, lawmakers could then take a separate vote on whether to disqualify Trump from holding future office.

In the case of federal judges who were impeached and removed from office, the Senate has taken a second vote after conviction to determine whether to bar the person from ever holding federal office again.

Only a majority of senators would be needed to ban him from future office, unlike the two-thirds needed to convict.