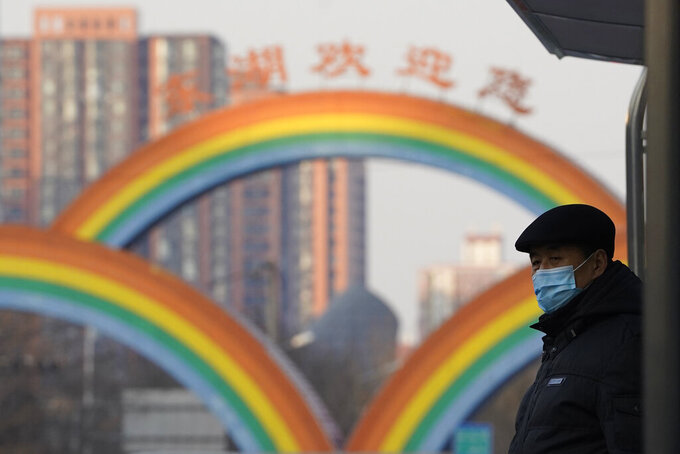 A resident wearing a mask to protect from the coronavirus waits at a bus stop near rainbow decorations on the streets of Beijing on Sunday, Dec. 27, 2020. Beijing has urged residents not to leave the city during the Lunar New Year holiday in February, implementing new restrictions and mass testings after several coronavirus infections last week. (AP Photo/Ng Han Guan)

SEOUL, South Korea — South Korea says 40 more coronavirus patients have died in the past 24 hours, the highest daily number since the pandemic began.

— President Trump has signed a massive COVID-19 relief bill for Americans but his foot-dragging has caused a lapse in unemployment benefits for millions.

— British hospitals are getting overwhelmed by coronavirus patients.

— A large study of a COVID-19 vaccine candidate made by Novavax Inc. is getting underway in the U.S.

— AstraZeneca's chief says researchers believe its vaccine will be effective against a new variant of the virus driving a rapid surge in infections in Britain.

BEIJING — China has reported seven new cases of coronavirus infection in Beijing, where authorities have ordered the testing of hundreds of thousands of residents.

Cases have been clustered largely in villages on Beijing’s northeastern edge, but authorities are wary of any spread in the capital that could hurt claims it has all-but contained local spread of the virus.

City authorities have already urged residents not to leave the city during the upcoming Lunar New Year holidays. China has canceled big gatherings such as sports events and temple fairs. Cinemas, libraries and museums operate at 75% capacity. The government is also discouraging business trips.

LOS ANGELES — California officials say hospitalizations for COVID-19 have stabilized in parts of the state but still overwhelm hospitals elsewhere, and Gov. Gavin Newsom is warning of a new surge in coronavirus cases following heavy holiday travel in defiance of recommendations to avoid gatherings.

ICU units in Southern California and the San Joaquin Valley have no capacity remaining. Newsom says the state has prepared for a new surge in cases by setting up hospital beds in arenas, schools and tents, though it is struggling to staff them.

California has been regularly breaking records for case counts, hospitalizations and deaths from COVID-19, while officials say models used for planning predict hospitalizations more than doubling in the next month from about 20,000 to more than 50,000.

FRANKFORT, Ky. — Kentucky’s governor says the state hopes to begin the next phase of its coronavirus vaccination program at the start of February and will target emergency responders, educators and people 70 and older.

Gov. Andy Beshear said Monday that more than 26,000 vaccine doses have been administered in Kentucky so far.

Health care workers along with residents and staff at long-term care facilities are at the top of the list for receiving vaccinations in the first phase. The next designated groups are those 70 and older, school personnel and first responders such as police and firefighters.

The governor says the target date for the second phase is around Feb. 1, though it could be “plus or minus a week.” He says officials expect it will take most of February to vaccinate those groups.

ATLANTA — Georgia has more than 4,000 people hospitalized with COVID-19, and officials say hospital admissions are increasing at a pace that raises questions about the health system’s ability to handle demand.

The state has moved into the top 20 for most new cases per capita in the last 14 days as infection rates have declined in the Midwest and risen in the South.

Northeast Georgia Health System is a four-hospital system based in Gainesville that continues to see increasing numbers of COVID-19 patients. It has put beds in a gym to care for people with milder cases, but Dr. John Delzell says they “are essentially at capacity” and surgeries are being delayed.

LAS VEGAS -- Nevada officials are reporting fewer cases and deaths from COVID-19 than any time in December.

Officials reported 868 new confirmed coronavirus cases Monday and 21 additional deaths. Both were far below the daily highs set earlier in December — of 3,194 cases and 57 deaths.

Before Monday, Nevada had reported at least 1,000 new confirmed cases each day since Nov. 2.

Officials say the reasons for the downward trend are unclear. They could be due to adherence to the state’s prevention measures, or to a decreased number of tests taken and processed over the holidays, or both.

KIRKLAND, Wash. — The residents and staff members at a Seattle-area nursing home that had the first deadly COVID-19 outbreak in the United States began receiving vaccines on Monday.

The first death associated with the Life Care Center of Kirkland, Washington, was reported in late February, and more than 40 people connected to the facility later died of coronavirus. The Seattle Times reports that Monday was the first day long-term care facilities can receive vaccines under a federal partnership with CVS and Walgreens, which is handling shots for the bulk of the state’s approximately 4,000 long-term care facilities.

Along with health-care workers, Washington state has recommended that nursing home residents receive the vaccine first, followed by residents of assisted-living facilities, adult family homes and other care sites. State officials have set a goal for all residents to receive the first dose of the two-dose vaccine by the end of January.

LOS ANGELES — Cruise ships without passengers will be visiting the Port of Los Angeles in coming weeks in a step toward a future resumption of service by the industry, which has been shut down by the coronavirus pandemic.

The port says the visits for fuel, supplies and services are part of operations to reestablish the ships in U.S. waters as a prerequisite to meet federal regulations in order to resume cruising in the future.

Ships from Princess Cruises, Holland America and Norwegian Cruise Line will periodically dock at the Los Angeles Cruise Terminal starting this week and through 2021.

Cruises have been suspended since March.

The Port of Los Angeles had 93 cruise cancellations, amounting to more than 70% of total cruises, this year.

According to the port, the cancellations have amounted to loss of nearly $100 million in economic activity on the waterfront. Each cruise ship call contributes about $1 million to local businesses and the economy.

TOPEKA, Kan. — Gov. Laura Kelly plans to get a COVID-19 vaccine Wednesday as part of a larger plan to give shots to selected Kansas officials so that state government can continue to operate during the pandemic.

The Democratic governor confirmed her plans Monday during an impromptu interview at the Statehouse following a ceremony marking the weeklong Kwanzaa celebration of African-American heritage. She told The Associated Press last week that the state was looking at giving shots to people in state agencies, the Republican-controlled Legislature and the state court system.

The state so far has concentrated on vaccinating health care workers. Kelly’s staff has repeatedly said that she will get vaccinated when it was “her turn.”

Kelly said she would get the first of two vaccine shots during a news conference.

MADRID — Spain has surpassed the milestone of 50,000 deaths officially attributed to COVID-19.

The Spanish health ministry said Monday the number of victims has reached 50,122.

Spain has recorded almost 1.88 million cases of the new coronavirus among its population of 47 million.

Nationwide restrictions on movement and curfews in recent weeks have helped the country slow COVID-19’s spread.

Spain began its national vaccination program on Sunday, at homes for the elderly.

LAS VEGAS — Problems magnified by the pandemic, but not the virus itself, are being blamed for a rise in deaths in the Las Vegas area’s homeless population.

Local public health officials and homeless advocates tell the Las Vegas Review-Journal that the number of fatalities on the street is up 16% compared to last year. Yet, the COVID-19 test positivity rate among homeless communities is about the same as the general population.

According to public health experts, the spike in fatalities could be attributed to the pandemic exacerbating difficulties in getting health care and other services. People living on the streets likely don’t have the ability to do virtual appointments.

BERLIN — The head of the World Health Organization says it’s important to step up genomic sequencing worldwide to ensure that new variants of the coronavirus are detected as the pandemic enters its second year.

New variants detected in Britain and South Africa that appear to be more infectious have caused concern and triggered new travel restrictions this month.

WHO Director-General Tedros Adhanom Ghebreyesus said at an online news conference Monday from Geneva that “there will be setbacks and new challenges in the year ahead — for example new variants of COVID-19 and helping people who are tired of the pandemic continue to combat it.”

He said that the WHO is working closely with scientists across the world to “better understand any and all changes to the virus” and their impact.

Tedros said he wanted to “underscore the importance of increasing genomic sequencing capacity worldwide” and of sharing information with the U.N. health agency and other countries. He said that “only if countries are looking and testing effectively will you be able to pick up variants and adjust strategies to cope.”

WASHINGTON — Nearly 1.3 million people went through U.S. airports on Sunday, the highest level of air travel in more than nine months, despite fear that travel will lead to more cases of COVID-19.

The Transportation Security Administration said it screened 1,284,599 on Sunday, the highest total since March 15. More than 10 million people have traveled by air since Dec. 18, including six days with at least 1 million people getting screened.

Figures on road trips aren’t available, but AAA predicted that about 85 million Americans would travel during the Christmas holiday season, most of them by car.

New cases of COVID-19 have been surging for about two months. There have been more than 330,000 reported deaths from the virus.

DUBAI, United Arab Emirates — Saudi Arabia has decided to extend its weeklong closure of all official ports of entry over fears of the new fast-spreading variant of the coronavirus.

The kingdom’s Interior Ministry announced on Monday that borders will remain shut and international commercial flights suspended for at least another week. Cargo flights and shipping routes will not be affected.

The country sealed its ports last week, following the discovery of the more contagious virus strain in Britain. Starting on Sunday, non-citizens in the country were allowed to leave the kingdom despite the travel ban.

Although cases have declined in recent months, Saudi Arabia has struggled to stem a major outbreak that has infected over 362,000 people and killed more than 6,000.