The Latest: Sabalenka advances to 2nd round at Wimbledon 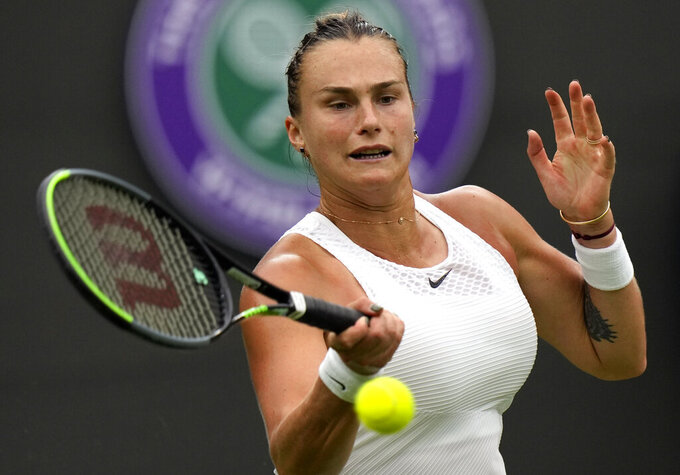 Belarus's Aryna Sabalenka returns the ball to Romania's Monica Niculescu during their first round women's singles match on day one of the Wimbledon Tennis Championships in London, Monday June 28, 2021. (AP Photo/Alastair Grant)

WIMBLEDON, England (AP) — The Latest on Wimbledon (all times local):

No. 2-seeded Aryna Sabalenka of Belarus is this year's first winner at Wimbledon. She swept her opening match against qualifier Monica Niculescu, 6-1, 6-4.

They played under the retractable roof on Court 1 while the start of matches on outside courts was delayed by rain.

Sabalenka has won a tour-leading 30 matches this year and her seeding is her highest at a major tournament. She dominated from the start against Niculescu, who had so much trouble holding she even tried an underhand serve.

Novak Djokovic was greeted on his return to Wimbledon by a standing ovation with the Centre Court crowd limited to 50% capacity because of the coronavirus pandemic.

Djokovic won the tournament the last time it was held, in 2019, beating Roger Federer in an epic final. He is halfway to a Grand Slam in 2021, having won the Australian Open and the French Open.

The No. 1-ranked Djokovic smiled as he entered the stadium. The retractable roof was closed because of rain that delayed the start of play on outer courts. Djokovic’s opponent is British wild card Jack Draper.

Djokovic has won seven of the past 12 major tournaments.

There are queues again at Wimbledon as fans are allowed on the grounds at the All England Club for the first time in nearly two years.

The dreary weather does not appear to be dampening anyone's enthusiasm as the grass-court Grand Slam tournament returns — even if rain is delaying the start of play until at least 12:30 p.m.

Stands selling food, drinks and souvenirs are staffed and doing business right from the start. Fans wearing the required masks are waiting in line.

Says Scott: "You’re not going to burn in the sun.”

Wimbledon was canceled last year for the first time since World War II because of the coronavirus pandemic.

It’s going ahead this year but with a reduced capacity at the start.

Organizers are planning to have full crowds of 15,000 at Centre Court for the women’s and men's singles finals on July 10 and 11.

Wimbledon already has its first rain delay of 2021.

Play on the first morning of the grass-court tournament has been delayed at least until noon because of rain.

Wimbledon is back and ready to start after being canceled in 2020 because of the pandemic.

Novak Djokovic and Venus Williams are among those scheduled to play Monday.

The sky is gray and rain is in the forecast.

Spectators are allowed at 50% capacity around the All England Club. That will go up to 100% for the singles finals on July 10 and 11.

While those are signs of a return to normalcy, a reminder that the coronavirus is still an issue came on the eve of the grass-court Grand Slam tournament. The only seeded woman from Britain, 2017 Wimbledon semifinalist Johanna Konta, had to pull out of the draw Sunday night because a member of her team tested positive for COVID-19.

Konta was in close contact with the person and must self-isolate for 10 days.

All players and their team members are staying at a designated hotel in London in what the All England Club is calling a “minimized risk environment."