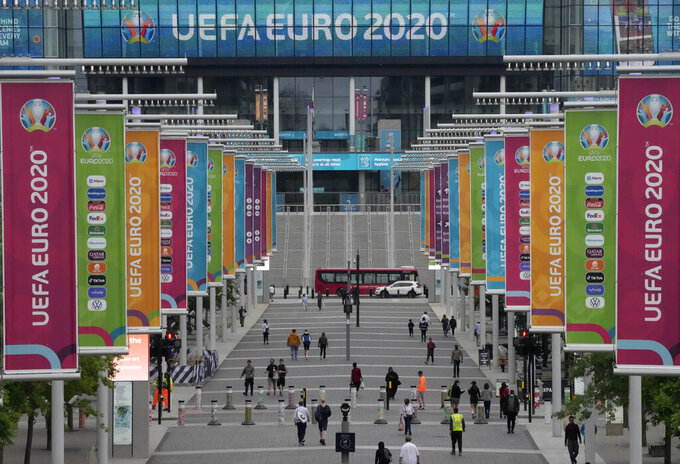 England and Scotland played to a 0-0 draw at the European Championship.

Both team had chances to score at Wembley Stadium. England defender John Stones hit the post with a header in the 11th minute. Scotland forward Lyndon Dykes then had a shot cleared off the line by Reece James in the 63rd.

England has four points in Group D while Scotland has one. Both can still advance to the round of 16.

Morata was singled out by fans and Spanish media after his misses in the team’s 0-0 draw against Sweden at the European Championship.

He says “you can’t please everyone and you have to accept when you are criticized.”

The Juventus striker says he will be ready to face Poland on Saturday at La Cartuja Stadium in Seville. Spain coach Luis Enrique has already said Morata will be in the starting lineup again.

Eden Hazard and Kevin De Bruyne will make their first starts at the European Championship in Belgium’s final group match against Finland on Monday.

Belgium coach Roberto Martinez says Axel Witsel will also play from the start in the game in St. Petersburg.

Belgium has already qualified for the knockout stage but Martinez is looking to give three of his most experienced players some extra game time after their recent injury problems.

Martinez says “Eden, Kevin and Axel will start against Finland because we need to see how (fit) they are and how long they can play.”

Martinez says “it’s an opportunity for us to stretch their match fitness to the maximum level.”

Ivan Perišić scored a second-half equalizer to give Croatia a 1-1 draw against the Czech Republic at the European Championship.

Patrik Schick had given his team the lead in the 37th minute from the penalty spot. He scored with blood pouring from his nose after being elbowed in the face by Croatia defender Dejan Lovren. The referee awarded the penalty after a video review.

Schick is the leading scorer at Euro 2020 with three goals.

The Danish soccer federation says Christian Eriksen has been discharged from the hospital.

Eriksen has been in the hospital in Copenhagen since collapsing on the field during his team’s opening match at the European Championship on Saturday.

Eriksen says “I am doing well under the circumstances.”

The Danish soccer federation previously said that Eriksen will be fitted with an implantable device that can function as both a pacemaker and defibrillator.

German Chancellor Angela Merkel’s chief of staff has cautioned soccer fans against traveling to London for the later stages of the European Championship because of fears of a coronavirus resurgence.

Braun says fans will have to quarantine for two weeks upon their return to Germany if coming from Britain.

COVID-19 infections have declined sharply in Germany over the past few weeks. But health minister Jens Spahn and other officials have pointed to Britain’s experience with the delta variant. That variant has powered another surge of infections in Britain and delayed plans to lift remaining restrictions until July 19.

The Euro 2020 semifinals are scheduled to be played at Wembley Stadium in London on July 6 and 7. The final is set for July 11.

Braun says “we must remain cautious until everyone has been offered vaccination.”

Portugal coach Fernando Santos says his team will be ready for whatever tactical lineup Germany counterpart Joachim Löw opts for on Saturday at the European Championship.

Santos says he noted how Löw has been tinkering with changes since Germany’s 6-0 loss to Spain last November. Löw’s 3-4-3 formation in his team’s opening 1-0 loss to France has been the subject of debate in Germany. Many are calling for Joshua Kimmich to be given a more central role.

Santos says ”we have to be ready for whatever is thrown at us.”

Portugal left back Nuno Mendes will miss the match with a thigh injury.

Portugal won its opening game against Hungary and would advance to the round of 16 with another victory.

Emil Forsberg converted a 77th-minute penalty to give Sweden a 1-0 victory over Slovakia and a big chance of reaching the knockout stage at the European Championship.

Dubravka dived the correct way on Forsberg’s penalty but could not keep it out.

Sweden has four points in Group E and that might be enough to qualify. Slovakia has three points after opening with a 2-1 win over Poland.

There was only one shot on target in the first half.

France goalkeeper Hugo Lloris says heat and noise will be factors when his team faces Hungary on Saturday at the European Championship.

Temperatures are expected to reach 33 degrees Celsius (91.4 degrees Fahrenheit) for the afternoon kickoff in Budapest.

The veteran goalkeeper says that “heat is an important factor which you have to take into consideration” and he hopes there is a water break.

Then there’s the noise at the 67,215-capacity Puskas Arena. Hungary is the only country that allows a full stadium at Euro 2020.

Lloris says it will be hard “to talk to a forward and even an attacking midfielder.”

Morata had been criticized by fans and Spanish media for his misses in the team’s 0-0 draw against Sweden. He had also been ineffective in Spain’s Euro 2020 warm-up match against Portugal. That also ended in a scoreless draw.

Luis Enrique says Spain’s starting lineup for the match against Poland will include “Morata and 10 more.”

The coach says captain Sergio Busquets is in condition to play on Saturday. Busquets has returned to the squad after being out with COVID-19.

Dutch King Willem-Alexander’s visit to an orange-decorated street in The Hague during the European Championship has garnered criticism for mingling a little too closely with soccer fans.

The head of the House of Orange visited the street on Thursday as the Netherlands played Austria at the delayed Euro 2020.

The king was seen shaking the hand of at least one person and not sticking to the country’s 1.5-meter social distancing rules in a video posted on social media and photos of the visit.

She adds that “you see that it sometimes goes wrong. I think out of enthusiasm.”

It is not the first time the Dutch monarch has been criticized during the COVID-19 pandemic. He apologized last year for taking his family on vacation to Greece. The family hurried home after a public outcry.

The vacation did not breach coronavirus restrictions but it came just days after the Dutch government introduced what it called a “partial lockdown” in a bid to rein in soaring infections.

Switzerland goalkeeper Yann Sommer is back with his national team after visiting his wife and their new-born daughter in Germany.

Sommer posted a photo on his Instagram account with the message “Welcome to the family little sister NAYLA.” The family now has two daughters.

Sommer flew to Cologne after playing in Rome in Switzerland’s 3-0 loss to Italy.

The Swiss soccer federation posted footage of Sommer’s return to training in Rome. The team flies later in the day to Azerbaijan for its final Group A game.

Switzerland needs a win over Turkey to advance to the round of 16.

Dejan Kulusevski is among Sweden’s substitutes for the team’s European Championship match against Slovakia after completing his isolation period following a positive test for the coronavirus.

The Juventus winger tested positive for COVID-19 three days before the start of the tournament and missed Sweden’s 0-0 draw against Spain on Monday.

Mattias Svanberg was another Sweden player to get the virus ahead of Euro 2020. The midfielder is not ready to play against Slovakia in St. Petersburg.

Slovakia defender Denis Vavro will miss the game after testing positive for the virus after checks on Wednesday.

Sergio Busquets will rejoin the Spain squad at the European Championship after testing negative for the coronavirus.

Busquets had been in isolation since June 6 because of a positive result for COVID-19.

The Spanish soccer federation says Busquets latest negative test result came back Thursday so he will be allowed to be back with the team.

The federation says he will be in Seville for Saturday’s match against Poland. Spain opened its Euro 2020 campaign with a 0-0 draw against Sweden in Group E.

Diego Llorente had also gone into isolation because of the coronavirus but the defender had already rejoined the squad after health officials determined his test result was a false-positive.

Busquets is Spain’s most veteran player in the squad. He is the only one left from the World Cup-winning squad in 2010.

UEFA is in talks with the British government about allowing foreign fans to fly into London for games in the latter stages of the European Championship.

European soccer’s governing body still has a contingency plan which involves taking the semifinals and final to Budapest if an agreement cannot be reached with authorities in London about entry for fans.

Plans to lift more coronavirus restrictions in England this month have been paused until July 19. Tourists from all participating countries have to quarantine for at least five days when entering Britain at the moment.

The Euro 2020 semifinals and final are scheduled to be played at Wembley Stadium from June 6-11.

UEFA says “we understand the pressures that the government face and hope to be able to reach a satisfactory conclusion of our discussions on the matter.”

UEFA has already secured a rise in attendance from about 22,000 to at least 40,000 for one round of 16 game, the semifinals and the final at Wembley.

England will be back at Wembley Stadium to play its second match of the European Championship on Day 8 of the tournament.

The English will face old rival Scotland knowing another victory will give the team a spot in the round of 16.

The first match of the day will be between Sweden and Slovakia in St. Petersburg. The Slovaks can advance with a victory.