The Latest: SEC has 40 players selected through 3 rounds 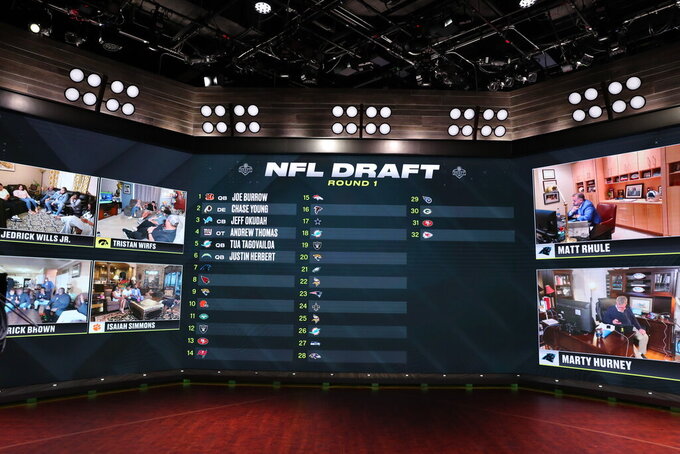 In a photo provided by ESPN Images, the first six selections in the NFL draft are displayed during ESPN's coverage of the NFL football draft, Thursday, April 23, 2020, in Bristol, Conn. (Allen Kee/ESPN Images via AP)

The Latest on the second and third rounds of the NFL draft.

The Southeastern Conference is on pace to smash another NFL draft record.

A year after having a record 64 players selected during the three-day, seven-round event, the powerhouse league had a whopping 40 guys go in the first three rounds.

The conference broke the NFL record by having 15 guys chosen in the opening round Thursday and had 25 more Friday — 10 in the second and 15 in the third.

Thirteen of the league’s 14 teams had at least one player drafted. Only Mississippi failed to land a player in any of the first three rounds.

The last pick of the third round was Tyre Phillips, an offensive lineman from Mississippi State taken by Baltimore.

A brother act has landed in Detroit.

Notre Dame linebacker Julian Okwara was drafted with the third pick of the third round. The Lions already have his older brother, Romeo, a defensive end who also went to Notre Dame.

Julian comes off a broken leg against Duke that short-circuited his 2019 season. His brother spent two seasons with the Giants before moving to the Lions.

Notre Dame didn’t have a player taken in the opening round, but since has had three.

After having a record 15 of the 32 players in the first round of the draft came from the Southeastern Conference, another 10 SEC players came off the board in Round 2.

And that’s not including Jalen Hurts, the Oklahoma quarterback who started his career with three seasons at Alabama.

Seven more wide receivers went in the second round, one more than in Day 1, including Florida’s Van Jefferson to the Rams and Baylor’s Denzel Mims to the Jets. With 13 receivers taken in the first two rounds, it breaks the record of 12 set in 2014.

The second round was the running back round, with five high-profile players coming off the board, including AJ Dillon from Boston College taken by the Green Bay Packers with the 62nd pick.

Oklahoma quarterback Jalen Hurts, who began his college career at Alabama, was selected by the Philadelphia Eagles in the second round with the 53rd overall pick.

Hurts was the fifth quarterback taken overall and the first of Day 2. Hurts started his first two seasons at Alabama, leading the Crimson Tide to two national championship games.

He lost his job to Tua Tagovailoa and transferred to Oklahoma for his final year. Hurts became a Heisman Trophy runner-up last year in Norman, passing for 3,851 yards and running for 1,298 yards.

The Eagles might be able to use him in a similar way the New Orleans Saints use Taysom Hill, running, receiving and passing.

As if the Chicago Bears don’t have enough tight ends on their roster, they added another with Cole Kmet of Notre Dame. Kmet was the first at his position selected this year, going 43rd overall.

An All-American went soon after as Minnesota safety Antoine Winfield Jr., was taken by Tampa Bay at No. 45. Winfield’s dad played against Tom Brady in college, then went on to an outstanding pro career. Now the younger Winfield is a teammate of Brady.

Notre Dame wideout Chase Claypool, a native of British Columbia who was so ignored by colleges that he sent out his own tape to schools, went 49th overall to Pittsburgh. It was the Steelers’ initial selection.

A versatile defensive back like one of his Crimson Tide predecessors, Pittsburgh’s Minkah Fitzpatrick, McKinney is comfortable in man coverage and zone. The Giants had a hard-hitting safety from Alabama in Landon Collins, and now they have McKinney.

Another first for this crop: a non-FBS player went when New England made its initial choice after trading out of the opening round. Safety Kyle Dugger of Division II Lenoir-Rhyne was the guy.

An early trade saw the Colts, who already had bolstered the offense with wideout Michael Pittman Jr. of Southern California at No. 34, adding a running back in Jonathan Taylor. A long-time starter and heavily used player at Wisconsin, Taylor also has had some fumbling issues. But he’s been a consistently reliable performer and a team leader.

The NFL will provide a dollar-for-dollar match on Friday of every donation to its fundraiser to fight the coronavirus pandemic.

Commissioner Roger Goodell announced the matching donations by the league at the beginning of Friday night’s broadcast of Rounds 2 and 3 of the draft.

Money raised during the “Draft-a-Thon” will benefit COVID-19 relief efforts and pay tribute to healthcare workers and others on the front lines of the pandemic.

Donations will be divided among six charities: the Salvation Army, the American Red Cross; CDC Foundation’s All of Us; and the COVID-19 response funds of Feeding America, Meals on Wheels America and United Way.

The “Draft-a-Thon” had raised more than $4 million by early Friday evening.

The Indianapolis Colts made their first pick of the draft, No. 34 overall and the second pick of Day 2, grabbing Southern California receiver Michael Pittman Jr.

The son of the former NFL running back was a Biletnikoff Award finalist as the top receiver in the country last year. At 6-foot-4, Pittman is big and strong. He had 101 catches for 1,275 yards and 11 touchdowns last season.

Georgia running back D’Andre Swift was next off the board, going to the Detroit Lions. Swift was the second running back selected in the draft after LSU’s Clyde Edwards-Helaire was the final player taken in the first round by the Kansas City Chiefs.

The Cincinnati Bengals held firm atop the second round of the draft, selecting receiver Tee Higgins to catch Joe Burrow’s passes.

Many teams covet the opening spot in the round, viewing it almost as a first-rounder because a player — usually several players — they graded as a top-32 guy has not been chosen.

But unless a club was willing to part with a 2021 first-round choice to move up for No. 33 this year, the Bengals were wise not to budge.

Besides, they likely rated Higgins as a first-round talent, too.

So in addition to finding what they hope will be their franchise quarterback in Burrow with the first overall pick, the Bengals (2-14 last season) added a threat who can make the spectacular reception.

Burrow and Higgins also worked out together heading toward the draft.

Maybe the most intriguing All-American on the board is Kentucky’s Lynn Bowden, who made the team as an all-purpose player. Bowden was Kentucky’s leading receiver, but injuries forced the Wildcats to move him to quarterback and him became a dominant runner, going for 1,468 yards.

In the NFL, Bowden is likely to move back to wide receiver, but his do-it-all skills could increase his value.

The Denver Broncos are hoping to get off to a better start in Day 2 of the NFL draft. Coach Vic Fangio says his internet and cable TV locked up on him Thursday just when the NFL draft was about to start.

The Broncos didn’t draft until the 15th pick, but Fangio says his IT expert, Russ Trainor, was frazzled.

Trainor summoned some Comcast engineers nearby and they quickly arrived at Fangio’s house to fix the problem.

Fangio says the cable guys had him back up and running within a few minutes.

Safety and running back.

Positions that were somewhat or totally ignored in the first round of the draft figure to get a lot of attention on the second day of selections.

The second and third rounds of the virtual draft could see, pardon the pun, a run on running backs. Only one, LSU’s Clyde Edwards-Helaire, went on Thursday, to the Super Bowl champion Kansas City Chiefs in the final spot.

As usual, the spotlight will shine on any quarterback remaining. That means Jake Fromm of Georgia, Jalen Hurts of Oklahoma and Jacob Eason of Washington could be called out by Commissioner Roger Goodell.