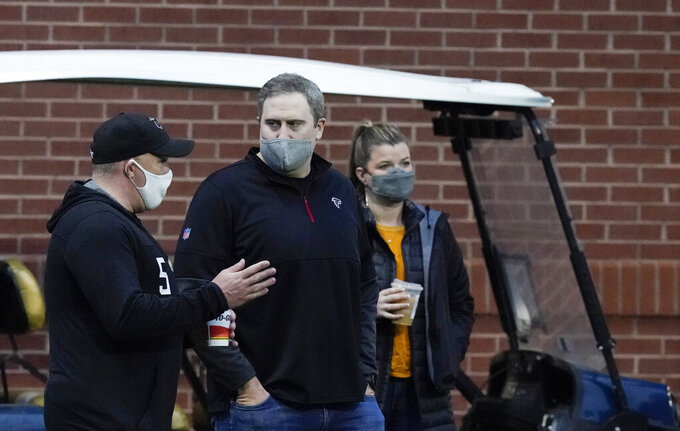 Arizona Diamondbacks manager Torey Lovullo said about a dozen of the team’s coaches and players received their first COVID-19 vaccination shots on Tuesday while they were volunteering at a vaccination site.

Lovullo said another group of players and coaches would volunteer in the coming days. The fifth-year manager said they were helping organize car lines and taking information from people getting the vaccine.

Arizona is opening up COVID-19 vaccination shots to all people over the age of 16 on Wednesday morning.

The Houston Astros will permit up to 50% percent capacity at Minute Maid Park for regular-season games in April. The team says that number will allow fans to stay physically distanced inside the stadium.

The home opener for the Astros is April 8 against Oakland. Houston hosts 14 games in April -- Oakland and Detroit visit for three each, the Los Angeles Angels and Seattle play four times.

The last time fans were permitted at Minute Maid Park to see the Astros was Game 7 of the 2019 World Series against Washington. The announced attendance was 43,326.

The Charlotte Hornets will allow approximately 5,000 fans to attend NBA home games beginning March 26 against Miami, or about 25% percent of the Spectrum Center’s seating capacity.

That’s a 10% increase from the 3,000 fans that were allowed to attend home games beginning March 13.

Under the changes announced Tuesday by North Carolina Gov. Roy Cooper, sports venues were allowed to increase fan attendance to 50% of capacity. But to comply with social distancing guidelines the Hornets were only able to expand to 25% capacity.

The Preakness will be run in front of a limited capacity of 10,000 fans at Pimlico Race Course in Baltimore on May 15.

Organizers of the second jewel of horse racing’s Triple Crown announced the decision Tuesday. Churchill Downs has said it expects the Kentucky Derby to be run in front of roughly 40-50% of capacity May 1 in Louisville. Typically, the Preakness draws over 100,000 spectators.

The Kentucky Derby, Preakness and Belmont were run out of order last year with no fans in attendance. It’s not immediately clear what the capacity will be at Belmont Park on June 5, though New York State has set 10% capacity limits for other sports.

Thirteen sports leagues have teamed with Willie Nelson on a PSA encouraging people to get the latest information on COVID-19 vaccinations.

“In the song, I sing ‘I’ll be seeing you in all the old familiar places,’ and that’s exactly what I hope these PSAs will help do; help get Americans informed about the vaccines and one step closer to the people and moments we miss,” Nelson said. “I’m happy to be part of this new campaign with the Ad Council, COVID Collaborative and these sports organizations to empower millions more to get the answers they need and feel confident in getting vaccinated, like I did.”

Among the moments celebrated in the video are Jordan Spieth after winning a golf tournament; Naomi Osaka and Coco Gauff at the U.S. Open; and Pete Alonso hitting a home run.

Since the pandemic was declared in March 2020, the Ad Council has mobilized the industry to launch a multi-pronged communications effort to combat COVID-19. To date, the Ad Council’s COVID-19 response efforts have resulted in 44 billion impressions, $456 million in donated media value, and over 33 million visits to Coronavirus.gov.

“The NFL is pleased to join with the other professional sports leagues to encourage communities to learn more about the COVID-19 vaccine,” said Anna Isaacson, NFL senior vice president of social responsibility. “The NFL has a longstanding record of working to make positive change in communities, and through this vaccine education campaign we are committed to using our platform to help people make informed decisions about what is best for them.”

Georgia Tech has delayed the start of spring football practice because of positive COVID-19 tests.

The Yellow Jackets were scheduled to hold their first practice on Tuesday.

“We received word this morning of a small number of positive COVID-19 tests within our program,” coach Geoff Collins said. “We will always err on the side of caution when it comes to the health and safety of our players and staff.”

Georgia Tech had prepared for the possibility by building extra days into its practice schedule, Collins added. He said the Yellow Jackets “fully intend to still hold our 15 practices allowed by the NCAA this spring.”

The school will hold off practicing until getting clearance from its medical experts.

Georgia Tech is coming off a 3-7 season and is 6-16 in two years under Collins.